Why F1 is losing a frustrating enigma with Grosjean’s exit

Romain Grosjean’s ongoing recovery from the injuries sustained in his life-threatening Bahrain Grand Prix crash has ruled him out of the season finale in Abu Dhabi, bringing his Formula 1 career to a premature end. In this piece, first published when Grosjean’s exit from Haas was announced in late-October, EDD STRAW reflects on the calibre of driver F1 is losing

It’s unbelievable that a driver of Romain Grosjean’s pace is set to slide out of Formula 1 without a victory to his name, and yet perhaps inevitable given the trials and tribulations of his career.

He’s a contradictory enigma of a grand prix driver, often pilloried today for his on-track mishaps and frustrated radio messages, and yet he will go down among the best drivers never to win a world championship race. 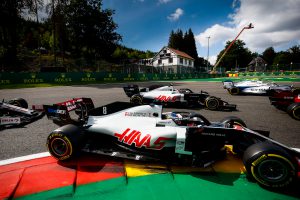 All of these things, and more, did go wrong. Yet while capable of plunging embarrassing depths and infuriating even his most enthusiastic admirers, Grosjean could also do amazing things – and did them more often than he found disaster.

Even during the past two seasons as Haas has struggled, he’s had some great moments. While clashes with team-mate Kevin Magnussen and his regular outbursts of frustration have drawn the attention, he’s also enjoyed some overlooked moments of genius. In qualifying for the 70th Anniversary Grand Prix at Silverstone, he turned in a brilliant lap that was only good enough for 13th thanks to the limitations of the car. He also had strong weekends at Monza and Mugello, finishing last in the latter but in a damaged car that was in the wall on the first lap. A fine drive to ninth at the Nurburgring then bagged him a first points finish in over a year.

The trouble with Grosjean is that the bad could never entirely be filtered out to leave only the pure brilliance. The closest he came was during that spectacular second half of 2013, leading at Suzuka, splitting the Red Bulls at Austin and becoming a familiar sight on the podium. His tally of 10 top-three finishes without a win, three less than the record held by Nick Heidfeld, shows how close he came to getting that win.

It wasn’t entirely his fault that he couldn’t build on that momentum. The Enstone team’s financial struggles were well-known and in 2014 it slid down the order and set the tone for Grosjean’s final seven seasons in F1. Perhaps the departure of Eric Boullier to McLaren, a keen – if occasionally frustrated – supporter of Grosjean’s talent who was so important in extracting the best of him, was also significant in that.

After all, it was Boullier who was key to Grosjean’s rehabilitation as a grand prix driver after a seven-race stint at what was then called Renault at the back end of 2009. With no chance to test and up against the formidable Fernando Alonso, Grosjean’s pace was reasonable in the circumstances but he made himself unpopular in the team by seemingly not learning from mistakes and having the attitude of someone who had broken through in the big time rather than one who was taking his first steps at the top level.

Boullier’s first professional interaction with Grosjean was to sack him after taking over as team principal at Enstone after Genii Capital took control of the team. Then, Boullier also ran Genii’s Gravity Sport Management stable but Grosjean was not initially part of it. But they stayed in touch and, after a dalliance with sportscar racing, Grosjean was given the chance to regain a foothold in single-seaters in Auto GP – by then using the first-generation A1GP cars – in 2010.

Despite a late start, he won that championship, which earned him some outings for DAMS in GP2 prior to a title-winning campaign for it in 2011 (below). Boullier was convinced of Grosjean’s talent, but had to put him into Friday practice sessions late that season to prove to those he would be working with that this wasn’t the same driver the team found irritating in 2009. His performances and approach eased some of those concerns and he was duly confirmed as Kimi Raikkonen’s team-mate for 2012.

Grosjean described himself as “half-a-rookie” in 2012 and at times he drove like it. There were too many mishaps and, as has been the story of his career, there was a tendency to focus on that rather than the pace that lay within him. But he survived the troubles of that season, including the ban, racking up some good results only to struggle again early in 2013 – notably at Monaco where he was stunningly quick but got it wrong in qualifying and the race.

By this time, the patience was running out and the idea that Grosjean was a rough diamond was difficult to convince anyone of. There was even talk of him being replaced, something Boullier stood against because he knew Grosjean had the potential to evolve into a world championship quality driver. What happened in the second half of 2013 proved that to be correct. Grosjean was consistent, dependable and ferociously fast.

Today, Grosjean refers to that period as the good old Lotus days and this was his peak in F1. Thereafter, he didn’t have the machinery to be a threat at the front and he was reduced to doing what he could with limited cars. And at the same time, he seemed unable to access that consistency of performance. Granted, it’s easier in a strong car to look good, but you never really knew what you were going to get with Grosjean.

Often, it was because he was trying to find something that wasn’t there in the car. As Grosjean often explains, he comes from the ASM/ART junior school having driven for the Frederic Vasseur-run single-seater superteam in F3 and GP2. Brake late, turn in hard, get on the power – certainly the quickest way round a corner if the car will let you do it, but you need the package to be under you. Grosjean seemed to spend too much time looking for car characteristics that weren’t available, particularly during his Haas days – hence the period when he regularly complained about the brake feel.

Yet when things were right, he was spectacularly fast and a joy to behold from trackside. This is not said lightly, but Grosjean at his best is as quick as anyone – even Lewis Hamilton and Max Verstappen – and it’s that speed, if refined and produced across all conditions, that you always hoped would carry him to victories in F1. Fully controlled and deployed as it was in the second half of 2013, it could have taken him to a world championship. But we never saw that.

In many ways, Haas was the worst place for Grosjean. He moved there in the hope that its Ferrari affiliations might earn him a shot at a seat with F1’s most famous team, and he was a person of interest for the Scuderia even though he never properly pressed home his claim for a seat. But Haas was a new team that he was brought in to spearhead. There was no Boullier-style figure to help focus that talent.

Combined with a team that was understandably very erratic, he became a driver whose performances were all over the map. The 2016 Brazilian Grand Prix weekend was Haas-era Grosjean in microcosm – an astonishing seventh in qualifying before crashing on the way to the grid. Grosjean says he’s justifiably proud of his contribution to developing Haas, and in that regard perhaps it got more out of him than he did out of it. That certainly shows he sees his F1 career as being about more than raw results.

Triumph and disaster were rarely separated for long during this period. Take 2018, where he had a terrible run early in the season with that Baku shunt then triggering the Turn 3 crash in Spain on the opening lap. Yet that season he also turned in a spectacular drive to eighth place at Suzuka after the rear-left corner overheated during an early-race safety car. This led to the rear trackrod shroud debonding and left him with a wobbly wheel with huge amounts of play in it. Had the team been aware of the extent of the problem, it would have retired the car yet Grosjean did a brilliant job to bag points.

This is an under-appreciated quality of Grosjean. While he can get frustrated if the car isn’t doing what he wants, particularly on the brakes, he’s capable of some amazingly dogged drives in damaged machinery. Mugello this year was a reminder of that and it’s important not to mistake his complaints over the radio as him giving up – in that type of adversity, his class shines through.

These qualities should have come together at some point to get Grosjean to the top step of the podium. That it didn’t happen for him is unfortunate, but it must also be put down to his own weaknesses. Despite working with a sports psychologist, Grosjean seemed to struggle to get himself in the right place mentally week-in, week-out to make the most of his prodigious talent.

There’s no shame in that – an affable, likable character perhaps he was just a little too ‘normal’ to translate his extraordinary ability into extraordinary success. And for all the frustrations he could bring to teams, he has usually been well-liked. Doubtless, Grosjean himself has moments where he struggles to come to terms with occasional mistakes.

Overall, Grosjean has had a fine grand prix career. It’s just a shame that he never had his day of days where everything came together. Who knows, maybe if that happened it could have opened the floodgates and locked him into that place where he could deliver his best every weekend?

Barring something outrageous happening in the final six races of this year, or Grosjean finding a way back onto the grid in future – as he’s 34 that’s not impossible – he will go down as a driver whose mercurial talent wasn’t quite fulfilled.

But even so, dotted throughout his grand prix career are moments of magic that show how good he could be and sporadically was. It’s for that that he should be celebrated, rather than being mocked for his occasional errors and he will be remembered as one of the most fascinating of the ‘supporting cast’ grand prix drivers of a decade dominated by Lewis Hamilton and Sebastian Vettel.