What caused 'catastrophic failure' of Bottas's wheelnut? - The Race
Skip to content
Formula 1

Mercedes will review its Formula 1 wheelnut design in a bid to avoid a repeat of the “catastrophic failure” that ended Valtteri Bottas’s Monaco Grand Prix.

Bottas was running second in Monaco when he made his pitstop and encountered a problem with the front-right wheel.

The wheelgun operator was unable to remove the wheel and Bottas was stationary for a long time before the mechanics realised they would not be able to take it off at all, and Bottas was forced to retire.

Mercedes team principal Toto Wolff refused to blame the wheelgun operator and said “there’s always many factors that contribute to such a catastrophic failure”.

“The mechanic that did that is one of the best, and one of the fittest in terms of pitstop speed that the team has.

It was an extreme variation of a pitstop problem seen plenty of times in F1 where the gun is not aligned cleanly on the nut and then the nut is rounded off when the gun is engaged.

On this occasion, the nut was damaged so badly the edges were instantly worn away completely and there was nothing for the gun to grip.

“We call it machining of the nut,” explained Mercedes technical director James Allison. 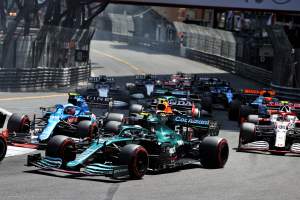 “Then you simply can’t take the screw out of whatever it is you are trying to take it out because you’ve no longer got the driving faces.

“Very similar things happen with our pitstop nuts. If the gun starts spinning and chipping off the driving faces of the wheelnut, then in quite short order, given the violence and power of the gun, you can end up with no driving faces and you’ve just machined the nut down to a place where there’s nothing left to grab a hold of.

“That’s what we had today.”

Though this type of problem has occurred before on a less aggressive scale, and caused costly delays, it has never triggered a DNF.

But the nut was so damaged that Mercedes never actually removed the wheel at all. Equipment back at the factory will be used to slice the nut off.

Wolff said that an incident like that triggers “anger” at first and an “emotional rollercoaster” but expects rationality to lead to a solution.

“You need to stay on top of your emotions and say ‘OK, it is what it is, what can we do in order to optimise the current situation? And if there is not a lot to optimise short term, how can we avoid these kinds of failures in the future and where do we need to optimise?’,” he said.

“And only if you create a safe environment where people can speak up, where you’re really able to analyse the shortcomings and the gaps, will you create solutions that will make you avoid doing the same mistakes.”