Who's thriving, and who's toiling, with F1 2022's car demands - The Race
Skip to content
Formula 1

First day of running in Bahrain testing and at this early stage of the new regulation cars, the spread in the state of preparedness between the teams is significant. Way more than would typically be seen with just two days of pre-season testing left. So what we are seeing on the timesheets is nowhere near representative.

That scatter between them seems closely connected with how far they have got in controlling the porpoising phenomenon. Ferrari has clearly made good progress with this, Mercedes – regardless of the visual impact of its new sidepods – has not. Bahrain exposed this problem more severely than Barcelona.

Red Bull is keeping its powder dry with no attempt made at a fast lap, just a series of consistent long runs from Sergio Perez. The other team with an apparently good handle on the porpoising – McLaren – was instead floundering around Sakhir with brake problems but in between times still managed to go reasonably quickly. 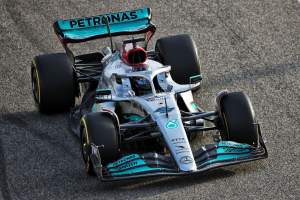 AlphaTauri set the fastest time after Pierre Gasly did a series of single-lap runs on the softest tyres late in the day. But given the expected gap between his C5 and the C3 tyre compound on which the Ferraris set their times (Charles Leclerc in the morning, Carlos Sainz in the afternoon), the red cars were probably in reality the fastest – at around 3s off the pace of the fastest cars at this stage in last year’s test.

This is considerably further off the 2021 cars than was the case at Barcelona, as the Sakhir track’s bumps and windy gusts exposed greater sensitivities of the new generation of cars. Lando Norris explained the challenge thus: “It’s a lot hotter today than in Barcelona, in terms of how the tyres are working, how the cars are working. A lot bumpier too, so how the cars are performing over the bumps, and the compromises you have to make with the set-up are very different.

“I think all of those things were tricky today and we had to try and understand and figure out. 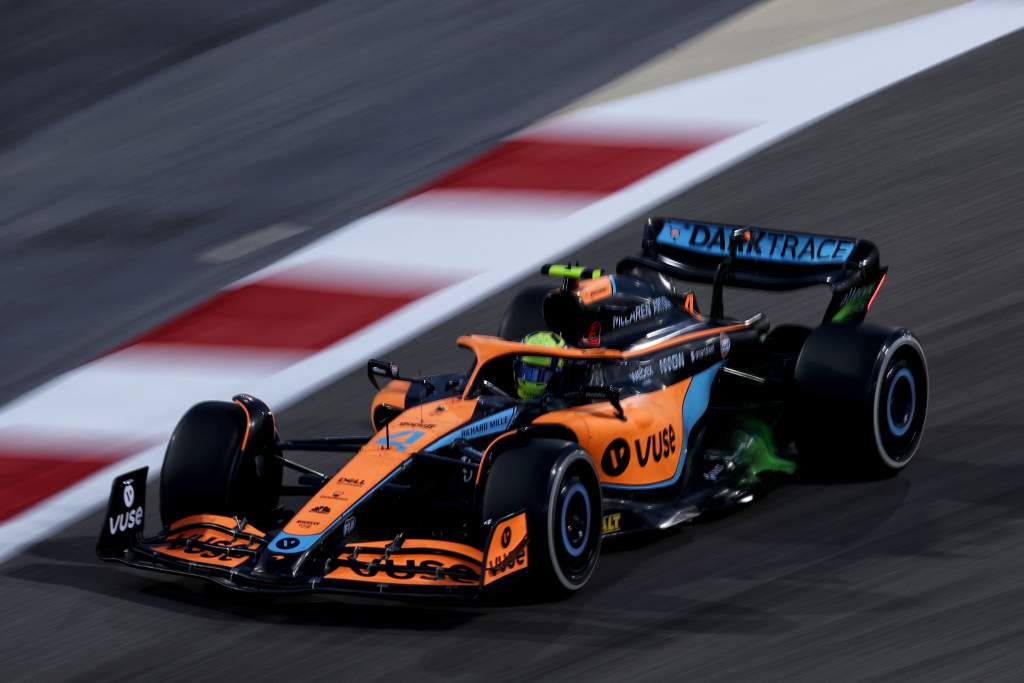 “It was a tailwind all day, which makes it so much harder to get the car stopped, and in terms of downforce you just have a lot less than if you had a headwind or no wind for example.

“And secondly is, with these bigger tyres, how you have to set up these cars is stiffer. That and then it’s quite a bumpy entry [into Turn 9 before Turn 10] – and you’re also turning while braking. So when you put all of this together, it’s not what a Formula 1 car is designed to do necessarily, makes it extremely tricky and very easy to lock up that front left tyre, go straight on and flat-spot the tyres and so on.

“It’s a difficult one – because especially when you put new tyres on, you want to push a little bit more, but every time you push it, you lock up. So you really have to pace yourself.”

Add into that the porpoising phenomenon and often when the brakes locked, they would stay locked for a long time as the rocking of the car loaded and unloaded the front tyres.

Watching their behaviour, although the Ferrari would bounce on its suspension just like most of the others when run at a low ride height, it would still appear to be driveable. The sparks were flying from the rear of the floor through some of the medium-speed corners as Sainz set his fastest time, but the car appeared to remain fully controllable. 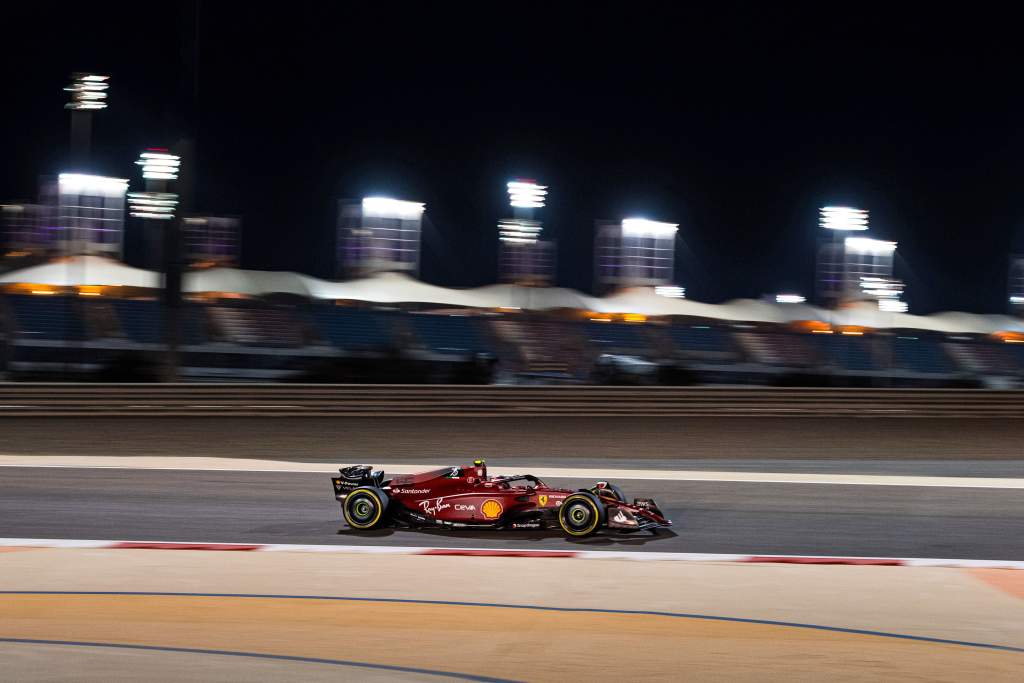 The Mercedes, by contrast, appeared to be virtually undriveable at parts of the track – particularly the approach to Turn 1 – when the ride height was set low. When running with a less aggressive ride height, its understeer through the slower corners was excessive. 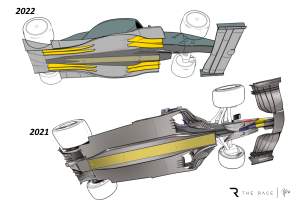 Porpoising and slow-corner understeer are the bugbears of the new cars. The Ferrari and AlphaTauri seem able to find a workable window in which neither is debilitating – though this became apparent with the latter team only after Gasly’s car spent much of the day in the garage, having set-up changes made.

Red Bull did only long-running with Perez. His 2s deficit to Gasly becomes more like 1.5s when account is taken of the different tyre compounds. The rest (and probably more) is likely fuel weight and the appropriate pace management for a race stint.

The RB18 looked well-behaved, without the off-track moments which characterised many of the cars (although Perez did subsequently spin off to end the day). 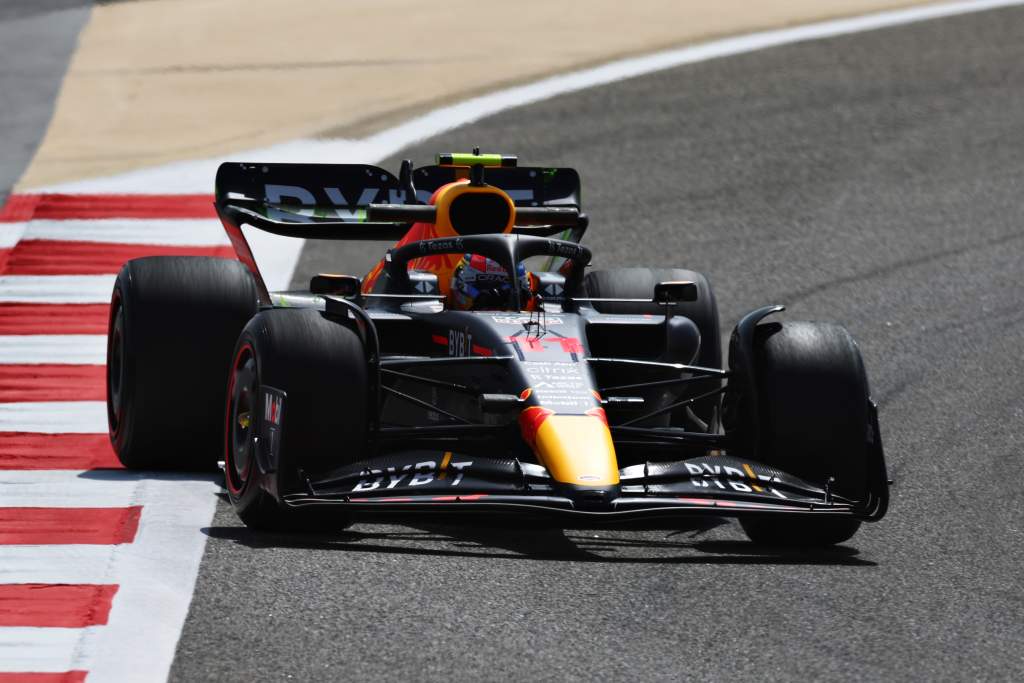 Aston Martin and Williams felt able to try for single laptimes and were within a respectable deficit of the Ferraris – with all the usual caveats about unknown fuel loads – but the Aston looked a difficult drive. Alex Albon in the Williams did a comparably long run to Perez but on a softer tyre (the C3 rather than C2) averaged around 1s slower.

We have only the barest of bones of a competitive order at the moment and we can expect the form to be extremely volatile as the teams work away at unlocking the strange secrets of this new generation of car. But Ferrari does appear to have come out of the blocks well.