When will Hamilton's title run finally end? Our guesses - The Race
Skip to content
Formula 1

When will Hamilton’s title run finally end? Our guesses

Is there any sign of him being deposed any time soon?

Here’s what our writers reckon:

Clear favourite for the next two at least

There’s nothing to stop Hamilton’s run continuing for as long as he wants it to.

If we accept that he will be here for another two years at least, from the perspective of right now he’s already favourite for those two titles.

The Mercedes team advantage is so ingrained, it’s so deeply resourced and brilliantly managed, so tightly knit with Hamilton himself, that it’s difficult to see where the challenge might come from.

Even when Mercedes didn’t have the outright fastest car in 2018, the team and Hamilton combined comfortably won the title regardless.

It’s easier to envisage the day when Hamilton feels his new life calling than the day when the team drops the ball.

Taking a stab at when Hamilton will stop winning comes down to two factors: how long will he stay and how long will Mercedes fight for wins?

My gut feeling is that Hamilton will definitely race in 2021 and he will be tempted enough by the new rules to stick around in 2022. I think he’s curious to know what next-gen will be like and wants to experience it.

So that means at least two more years to consider whether someone will beat Hamilton. I can’t see it happening in 2021 because as good as Valtteri Bottas is, Hamilton has him covered. He’s a slightly better qualifier and a much more accomplished racer.

As for 2022, why should Mercedes be toppled? Unless there’s a big misstep adapting to the new budget cap, Mercedes’ track record adapting to new rules in recent years speaks for itself. So Hamilton may well retain a car advantage.

If he doesn’t, I’d still expect Mercedes to be in mix. And in a straight fight, 2022-spec Hamilton has the speed and experience to win out against the young chargers.

Given Hamilton is almost certain to win the 2021 world championship, barring never signing that long-awaited new Mercedes deal, something remarkable from Valtteri Bottas or a big step forward from Red Bull, you have to look to F1’s new regulations in 2022 as the first opportunity for him to be dethroned.

It’s impossible to estimate how likely that is, though. In 2022, he will turn 37 but there are no obvious signs of any decline that could put him at the heart of any drop-off. So instead it’s a question of if Mercedes drops the ball. 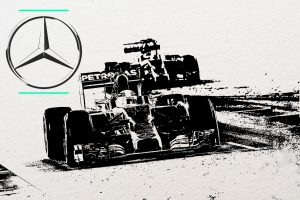 Rule changes do create an opportunity for mistakes to be made, but the same strengths that made Mercedes so formidable since 2014 mean it should still be a powerhouse in 2022.

The group of upwardly-mobile midfield teams will likely still be catching up, so it would be down to Red Bull or Ferrari to do a better job – something they have not been able to do for a long time.

If Hamilton is still going in 2022 and Mercedes still firing, the wait will be even longer and perhaps he will be one of those rare drivers who is able to go out on their own terms while on top.

He just has to be careful not to repeat the mistake of many and go on that bit too long.

Only when he retires

Hamilton will keep winning world championships until he walks away from F1 for good.

That’s not to say the statistically greatest driver of all time doesn’t have any worthy opposition – but we’re unlikely to see someone like Max Verstappen or Charles Leclerc stuck alongside him in a Mercedes, so nobody is going to have the car, or the team, to topple the dominant combination of this era.

You can cling to the hope of F1’s 2022 rules revolution to shake-up the order, but why should that derail Mercedes?

F1’s best-ever team has taken rule changes in its stride in recent years, and I see no reason for it not to do the same this time around.

Even if someone strikes gold in the first year of the new rules, could you really bet against Mercedes not putting things right in 2023 – especially if Hamilton sticks around because he doesn’t want to walk away on the back of a defeat?

Only when (if) he leaves Mercedes

Seven drivers’ titles for Hamilton and seven in a row for Mercedes. The big problem for everyone else is that he is likely to continue with Mercedes for a ‘few’ more years, so unfortunately for the others not much sign of a change on the horizon.

But for a few strategic errors by McLaren in 2007 and a drop-off in performance from 2009 to 2012, he could have been celebrating his 10th world championship.

Yes, sometimes it can be boring but that’s nothing to do with him – all he is doing is the job he is handsomely paid for and doing it better than all the others.

Only when another team masters Mercedes’ culture

As our recent exploration of Mercedes’ path to dominating modern F1 underlined, it’s not just the team’s resources and technology that have put it on top.

It’s the way it understands, nurtures and treats its people, and the working atmosphere it creates, and how this pays off in terms of learning from mistakes rather than castigating them, and developing layers of expertise for the future.

That’s been key to the record length of its title run, and until another big team can truly replicate it, Mercedes is going to have a human advantage that makes it and Hamilton unbeaten over a season.