What we know as Vettel/Aston Martin rumours intensify

Four-time world champion Vettel is low on options after Ferrari opted to replace him with Carlos Sainz Jr for the 2021 F1 season.

He has been linked with Racing Point, which will become Aston Martin in 2021, ever since his Ferrari exit was confirmed but this has become stronger ahead of the Hungarian Grand Prix.

According to a report in the German tabloid publication Bild, Vettel is now in receipt of a contract offer from Racing Point.

ORF followed up that story by insisting it was not a done deal and it could take some time for Vettel to decide what to do, which tallies with Vettel’s most recent public message that he is in no rush to determine his future.

“We will see in the next couple of weeks, months, what is happening, what opportunities there might be,” said Vettel last week.

Racing Point has been keen to downplay the prospect of Vettel replacing Sergio Perez or Lance Stroll.

When contacted by The Race regarding the latest speculation, Racing Point reiterated it has two drivers under contract that the team are happy with.

But here is why the supposedly closed door has actually been open throughout, whether Vettel-to-Aston suits all parties, and who Vettel might replace.

Though some have reported this slightly differently, it’s worth a reminder that every time Racing Point has moved to ‘clarify’ the futures of Sergio Perez and Lance Stroll they have always been short of a full Vettel denial.

The most recent example was the clearest proof of that approach yet.

Team boss Otmar Szafnauer was reported to have said last week ahead of the Styrian Grand Prix that there is “no space” for Vettel at the team because Perez and Stroll have long-term contracts.

But that’s not what Szafnauer said. He was asked to provide a firm no about whether it could offer Vettel a drive in 2021, and in his reply he said: “We have long contracts with both our drivers, so it would only be logical that we don’t have space.”

That’s not a denial, but it worked. Many people focused on “we don’t have space” and ignored the qualifier before it.

It might be logical to assume Racing Point doesn’t have space given its drivers have deals in place, but that doesn’t mean it’s actually the case.

VETTEL IS KEEN AND WILLING

Though his Ferrari stint has got less and less convincing, Vettel seems to have a dogged determination to stay in F1 and prove what he’s really about.

There’s been a theory around Vettel’s career for many years that as a driver who ‘did stuff early’ – his F1 debut, first win, first title – he would retire early as well.

But Vettel has made two things clear. First, that he is very keen to stay in F1 with the right project.

“I want to make sure I make the right decision for myself and my future,” he said recently. “I have a very competitive nature, I’ve achieved a lot in the sport and motivated and willing to achieve more.

“To do so I need the right package, the right people around me. That’s what I’m looking out for at the moment. If the right opportunity should arise it’s quite clear.”

And second, he’s since indicated that Racing Point could be a team that interests him, although he did dodge the part of the question that directly asked if it was an option for 2021.

“Independent from that I think Racing Point left a very strong impression and is certainly in a good place for this year,” he said.

“I know part of the team, I know some members of the team quite well from from my past and for a long time,.

“I think it’s obviously a good opportunity for them this year to have a good car to fight with and try and improve that from there.”

While many assume Lance Stroll’s genealogical advantage means he has a job for life thanks to being the son of the team owner, the scale of the project means this cannot be guaranteed indefinitely. Lance is now in his fourth season of Formula 1, and while he has enjoyed some high points he’s yet to prove he can be consistently strong enough to match the ambition of the Aston Martin project.

Stroll Sr’s involvement in F1 may have started as a means to get Lance on the grid, but this stepped up a level when he led the consortium that saved what was previously Force India and his involvement became higher-stakes again once he bought into Aston Martin. He’s a businessman, and there may come a time when it’s the correct business decision to strengthen the driver line-up. 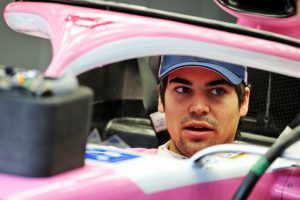 Despite Stroll outperforming Perez in wet qualifying in the Styrian Grand Prix, he was neither as fast nor as incisive as his team-mate in the dry. This cannot fail to build pressure on him.

Racing Point has also never formally confirmed Stroll as a race driver for 2021, instead only stating that his long-term deal does cover next season. There’s nothing preventing Stroll being found a place in another team while remaining affiliated with Racing Point with a view to a return in the future.

We can’t be sure whether or not Stroll Sr’s commitment to his son’s place in the team is absolute, but given the lofty aspirations it must have two drivers delivering at a high level to achieve those ambitions so a change on Stroll’s side of the garage cannot be ruled out.

Sergio Perez does have a race contract with the team for 2021 and given his level of backing and the quality of his performances it would be a bizarre move to replace him while retaining the driver who is not at the same level.

The scope for this happening depends on the exact details of what will be a complicated contract covering the three-year deal that was signed, or the willingness of Lawrence Stroll to pay for a premature conclusion to the deal.

Perez and his backers would only be willing to leave for a better opportunity within F1, which on current form leaves very few possibilities as of the teams without two confirmed drivers the only ones that fit would be Mercedes and Red Bull!

But if Racing Point does oust Perez for Stroll, the second time it has weakened its driver line-up to ensure the owner’s son has a place after dropping Esteban Ocon for 2019, then it would undermine the credibility of the team’s ambitions.

There’s still a long way to go, but team principal Otmar Szafnauer recently set a three-year timescale for emerging as a team capable of fighting for race wins. With big investment, a new factory due to be moved into in August 2022, and an affiliation with a car manufacturer, Racing Point is a genuinely upwardly mobile team.

Vettel made clear ahead of last weekend’s Styrian Grand Prix that he doesn’t want to race in F1 simply to make up the numbers. But while Racing Point won’t be in a position to win a race on outright pace next year (it is, however, currently quick enough to inherit a win if Mercedes and at least one Red Bull hits trouble), it could well be not far down the line.

Vettel turned 33 earlier this month so can afford to view this as a long-term project. Its current form shows good results are currently achievable and it’s not unrealistic to expect wins on the timeline Szafnauer laid out – a process of growth a driver of Vettel’s skill and experience could assist.

For a long time, Racing Point has punched above its weight in F1, with a well-run team, high-quality personnel and a formidable team culture. The financial heft is now being added, meaning Vettel could see it as a realistic route back to the front in F1.

And having struggled at times in the Ferrari environment, perhaps it could also help to get the best out of his prodigious talent.

NO FRONTRUNNING TEAM WANTS HIM

Though Vettel has said he’d probably go back to Red Bull if he was offered a seat, the reality is he won’t be. Red Bull made that clear last week.

And Mercedes is expected to retain Lewis Hamilton and Valtteri Bottas.

Vettel’s just not high enough up the pecking order for the established big teams as his stock has dropped as a number-one driver and he’s probably more trouble (and money) than he’s worth as a number two.

Another ‘project’ in Renault never made it past “tentative” talks and the French manufacturer opted to do a deal with Fernando Alonso instead.

So while Racing Point/Aston Martin has many plus points attached to it, it’s also Vettel’s only serious option. Otherwise he’d need to be content with slipping further into the midfield, and effectively making up the numbers. And that’s unlikely to be the case.

That means it’s effectively Aston or bust for Vettel. And a final thought for when it could happen – perhaps Vettel’s move could occur in 2022, after a year out.

This would allow Racing Point to honour any existing deal with Stroll or Perez, or at least give it more time to solve that problem, and would fit into what Vettel considers acceptable as well.

After all, he said last week: “Everything is an option at the moment – carry on, have a break or retire.”