What made Grosjean’s crash so violent, and how he survived - The Race
Skip to content
Formula 1

What made Grosjean’s crash so violent, and how he survived

Romain Grosjean’s horrifying Bahrain Grand Prix crash and the sight of his Haas Formula 1 car torn in two has prompted incredulity and relief he was able to survive.

It is a testament to the sustained safety drive undertaken by F1 and the governing body the FIA, including the introduction of the halo driver protection device, that Grosjean not only survived but got out of the car and jumped over the barrier under his own steam.

The FIA will conduct a thorough investigation into the crash and many more details need to be uncovered to understand the full scope of both the accident and Grosjean’s escape.

Gary Anderson, Edd Straw and Scott Mitchell explain the factors that created such a violent accident and the various car safety structures that played a vital part in preventing a worse outcome.

HOW THE BARRIER GAVE WAY

The ferocity of the crash was rooted in the speed Grosjean was travelling and the lack of time to decelerate before a sudden impact with the barrier. He was also moving ‘up’ the barrier and at an angle rather than head on. 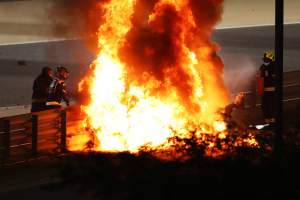 High-force crashes are not uncommon but it is rare to see them occur with exposed barriers, rather than the added protection of TecPro or tyres.

It is possible that the sheer force of the impact, combined with the angle of the hit, meant that kind of barrier could never stand up to the hit.

The FIA’s tools will have recorded the force of the impact and it will be of great priority for the FIA to ascertain why the barrier was penetrated and if anything can be improved within that structure and design in the future.

WHY THE CAR SPLIT AND CAUGHT FIRE

Once the front end of the car had pierced the barrier, it became trapped. From there on, to dissipate the energy involved in an impact like this it was structurally unable to ‘retain’ the rear of the car. 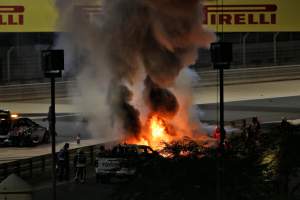 With the monocoque containing the driver held in place, the energy led to the rear end of the chassis coming away from what is the driver’s survival cell. This part is specified and designed to firstly protect the driver in extreme impacts.

The chassis being trapped in the Armco barrier meant that the energy of the heaviest part of the car – the engine and gearbox etc – led to the chassis structure around the fuel tank that is part of the survival cell failing.

You could be talking about an impact of something like 100G, so the back of the car, say around 500kg, could weigh for that instant something like 50 tons.

While the fuel cell is made of Kevlar and rubber and ballistically tested, the impact appears to be extreme enough to have damaged it or torn out some of the connections leading to the fire.

This structure is part of the survival cell and forms the closed bulkhead that the engine bolts on to. The battery pack was among the debris that came away from the car in the impact and it’s a possibility that this played a part in igniting the fuel.

With the rest of the monocoque intact, including the halo, the driver was protected but it was the failure of the barrier when it opened up that caused the survival cell failure around the fuel that ended up causing the fire.

THE VITAL ROLE OF THE HALO

Of the many chilling images around this crash, the most jarring was of Grosjean’s monocoque embedded in the barrier with the halo intact. 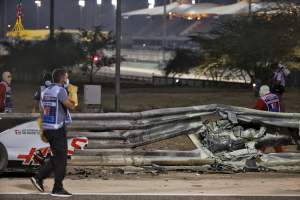 Despite the violence of the impact, the car separated in a way that meant Grosjean was still protected within the cocoon of the survival cell.

But the halo being buried in the barrier is an indicator of the danger of the second phase of the accident.

Though the monocoque survived, it would have almost certainly have left Grosjean’s helmet striking the barrier at force.

The halo device was badly maligned by some for its aesthetics when its introduction was confirmed, but has now proven its worth on several occasions.

And it should also be noted that despite the shock of the impact and the frenzy of the fire, Grosjean was able to extract himself from the remains of his car quickly and leap over the fence to safety – further highlighting the halo is not an obstacle to an swift escape when required.

Medical car driver Alan van der Merwe, one of the first on the scene, said that was “pretty amazing”.

He added: “It just goes to show all the systems that we’ve developed, everything worked hand in hand: the halo, the barriers, the seatbelts.

“Everything worked how it should and without just one of those things, it could have been a very different outcome.”