What Hamilton’s new F1 deal says about his ‘fire’

In the announcement of Lewis Hamilton’s new two-year contract extension with the Mercedes Formula 1 team there is a short reference to a fundamental factor in his decision.

“I have always said that as long as Lewis still possesses the fire for racing, he can continue as long as he wants,” said team boss Toto Wolff.

As Hamilton has racked up more and more wins, titles and records in his Formula 1 career, he’s often faced a variant of the same question: “How will you stay motivated?”

Hamilton always replies, but the likelihood is he doesn’t consciously think about it. Not much anyway. Motivation is almost second nature to elite athletes.

They keep going because there’s no alternative. Hamilton didn’t become the most successful driver in F1 because he’s happy to settle. There’s always a new goal, a new challenge, a new record – something to keep “the fire” burning.

Well, there is until there isn’t.

Usually that’s a result of external factors snuffing out serious opportunities. Even the best hit a peak and begin a decline and Hamilton said last year he sometimes wonders when he’ll “tip over” and that process will begin.

But Wolff says Hamilton’s “at the peak of his powers” still and with three wins this season and another title challenge on the cards, despite Max Verstappen’s current points lead, it would be tenuous to claim Hamilton’s slipping.

So, his on-track ability isn’t a factor. Hamilton’s still in control of his career timing. Which means his decision comes down to what he wants.

Hamilton said after signing his 2021 deal that he wouldn’t let success this season determine his future. More important, he said, was that “when I put that helmet on, I still have that smile when I leave the garage”.

He said he was still very much in love with racing. He didn’t see his one-year extension for 2021 as a suggestion to the contrary, or a hint he was not committed. Hamilton saw it as a reflection of a fortunate position in which he only needed to sort out the short-term, and could worry about the rest a little later. 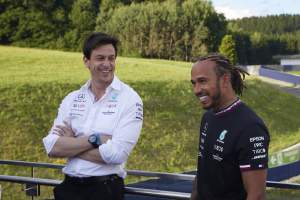 These are all easy positions to adopt when you’re winning. They get tested when you’re not. But Hamilton never flinched in his belief in himself – “I always bet on myself, I know what it takes to deliver” – and while Mercedes has been briefly knocked off its perch during this season, his faith in his team doesn’t seem to have been shaken either.

In the context of a season that’s brought Hamilton and Mercedes their biggest challenge for years, it’s quite easy to make an argument for Hamilton’s commitment fading.

He’s conquered all before him, Mercedes has finally been caught/overhauled, and the bid to win an eighth title has been complicated by a floor rule change many think was exacerbated to peg Mercedes back.

Hamilton could have walked away, defeated or not, thinking that F1 cannot offer him anything he hasn’t already experienced. Been there, got many, many T-shirts.

But even at 36, even with 274 grands prix under his belt, even with every meaningful F1 record matched or bettered, Hamilton’s not had enough. 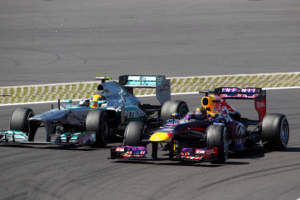 He’s had it ‘easier’ in the past with the best car on the grid, nobody can refute that. But he’s still worked hard – that’s why he’s kept winning, kept getting the best car.

It’s a trait rarely seen through the narrow window of grand prix weekends but Mercedes personnel always refer to Hamilton’s drive to improve and his work ethic as massive qualities behind-the-scenes.

The Red Bull/Max Verstappen challenge, the incoming new car rules for 2022, the prospect of Mercedes lining up George Russell as its future leader – any one of these could be the little nudge that convinced Hamilton to call it a day while he’s on top.

Instead, they seem to be fuelling the fire. He’s not put off by the work required to get back on top or to stay there. His recent self-prescribed return to the simulator – something he openly admits he dislikes doing and rarely gets involved in – in the wake of Mercedes’ difficult run is a good example of that.

Hamilton’s still capable of achieving great things in F1 and he has his off-track motivations as well in the form of diversity initiatives and charitable foundations. Ultimately, there are few reasons not to continue – but simply not wanting to would be a perfectly valid one.

“I got into racing because I loved racing and that has got to be always at the core of what I do,” said Hamilton a few months ago.

“If I don’t love racing and if all you are going for is accolades and world titles, I feel I could potentially lose my way.”

Committing to two more years would suggest Hamilton is far from doing that.