The Red Bull F1 team has terminated the contract of its test and reserve driver Juri Vips after an investigation into his apparent use of a racial slur.

Vips, a long-time Red Bull junior who was first named the energy drink giant’s F1 team’s reserve driver in 2020, was suspended last week after the incident occurred during a stream on the Twitch platform. 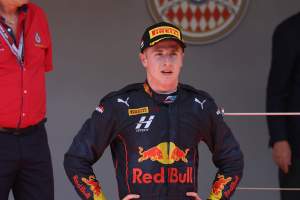 Red Bull pledged an investigation at the time, and now indicates this has been concluded.

“The team do not condone any form of racism.”

Vips, who has been competing for Hitech in Formula 2 as one of five Red Bull juniors in F1’s principal feeder series, is no longer listed in the junior team section of Red Bull’s website.

He’d made his grand prix weekend debut earlier this year, driving in a practice session for Red Bull during the Spanish Grand Prix weekend.

Vips is seventh in the F2 championship after 12 races. His Hitech team is yet to officially comment on the incident or Vips’s status with the team.