Max Verstappen took an ultimately commanding victory in a wild Emilia Romagna Grand Prix interrupted by a massive crash between Valtteri Bottas and George Russell, and in which Lewis Hamilton had to recover from ninth to second after a mistake.

Verstappen had burst through from third on the grid to lead at the start, with Hamilton trying to hang on around the outside of him at Tamburello only to end up bouncing heavily over the kerbs. The Mercedes lost a small part of its front wing, and Hamilton expressed some frustration towards Verstappen over team radio. 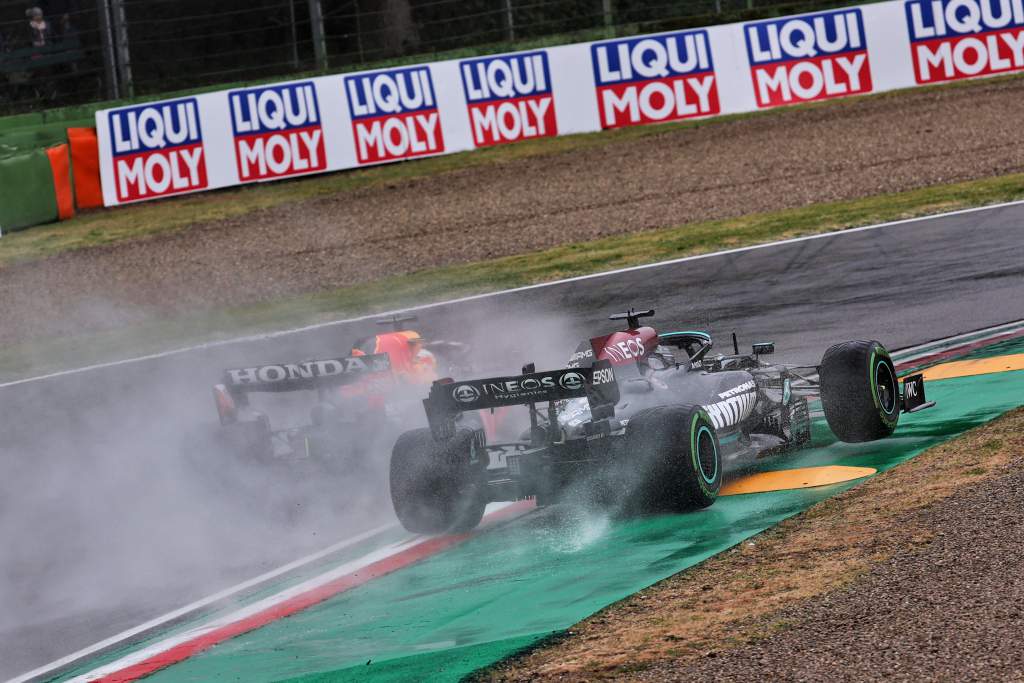 A lengthy safety car period – caused by Nicholas Latifi firing himself into the wall out of Acque Minerali by moving across on Nikita Mazepin as he rejoined after a spin – paused the race, before Verstappen scorched away once it began in earnest.

Hamilton stabilised the Red Bull’s lead at around five seconds, as they left the rest of the field trailing far behind.

When the track finally began to dry the Mercedes started closing in, with Hamilton getting the gap down to 2.6s.

Verstappen was the first of the pair to make the jump for slick tyres just before half-distance, releasing Hamilton into the lead. An ultra-rapid first sector suggested he’d keep it, but the loss of a couple of seconds with a slow tyre change combined with a superb final sector from Verstappen meant the Mercedes rejoined still behind the Red Bull.

Again Verstappen immediately pulled clear and rebuilt his 5s lead, only for heavy traffic to allow Hamilton to snatch three of those seconds straight back.

But when Hamilton got into the same queue, he slid off at Tosa while trying to lap Russell’s Williams, nudged into the barrier and smashed his front wing, then struggled to reverse out of the gravel. 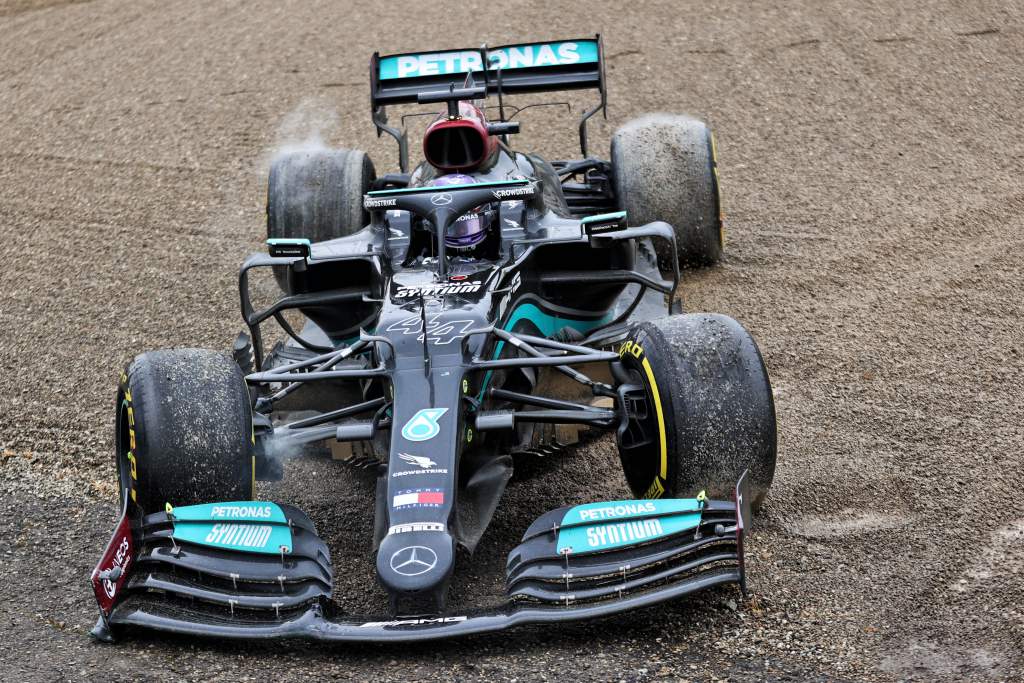 While Hamilton headed back to the pits for repairs, a huge crash unfolded when Russell tried to pass Bottas – who had made no progress after his poor qualifying run – for ninth.

Though the contact occurred when the Williams veered left into the side of the Mercedes at high speed, having appeared to touch the grass on the kink approaching Tamburello, Russell’s furious reaction suggested he felt Bottas’s driving had put him in that position.

A long red flag period followed to clear up the wreckage. Hamilton was down in ninth for the restart, at which Verstappen nearly threw away the lead by half-spinning out of Rivazza as he prepared for the green on the still-damp track. 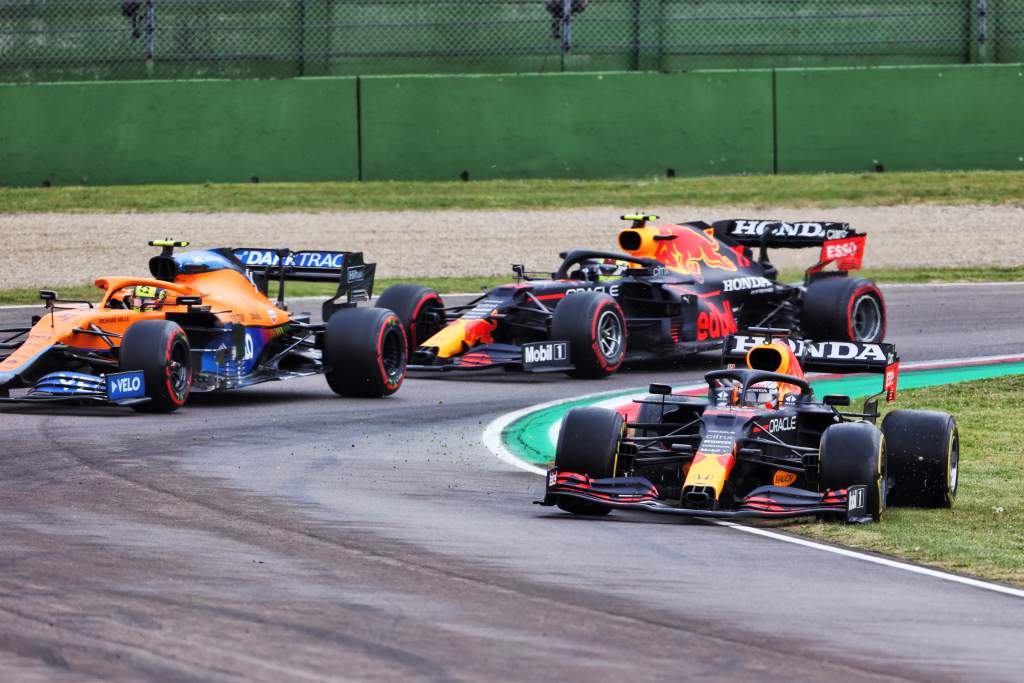 Remarkably he was able to gather it up still in first place and then pulled off a smooth restart before rapidly pulling away from the pack to establish a 20s advantage on the way to his 11th F1 race victory. 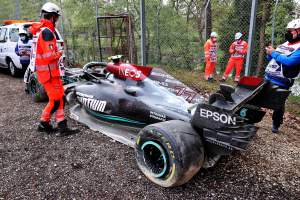 Charles Leclerc was in second at that point, having driven brilliantly in the first half of the event – quickly overcoming front row starter Sergio Perez to settle into third and then lapping at a pace beyond everyone bar Verstappen and Hamilton in the wet.

But the Ferrari was jumped by Lando Norris at the restart, the McLaren driver charging forward once allowed past his slower team-mate Daniel Ricciardo in the opening stages.

Hamilton had actually gone a lap down by the time he rejoined with his new front wing following his crash, but the red flag brought him back onto the lead lap and set up his recovery drive.

He made rapid progress, with Norris proved perhaps the toughest opponent before finally being overtaken for second into Tamburello with three laps left.

Hamilton finally gets past Norris for second#ImolaGP 🇮🇹 #F1 pic.twitter.com/jfbzqqvhQs

Hamilton then managed to grab the race’s fastest lap, which means he clings onto the world championship lead by one point over Verstappen.

Hamilton’s progress meant Ferrari didn’t get a home podium. Leclerc finished fourth and his team-mate Carlos Sainz Jr showing great pace in the wet in particular as he came through from 11th on the grid to fifth.

Perez’s race quickly fell apart after his brilliant qualifying. He went off at Piratella under the early safety car, then earned a 10s penalty by overtaking Ricciardo and Pierre Gasly to regain his position.

He was back to fourth for the restart after the Bottas/Russell crash, only to spin at Villeneuve and fall to the back. He could only recover to 12th.

Ricciardo fell back to sixth, holding off Lance Stroll’s Aston Martin and the AlphaTauri of Pierre Gasly. Their positions were later swapped by a 5s penalty for Stroll for going off-track to pass Gasly.

Fifth-place starter Gasly’s choice of wet tyres for the start led to him going backwards down the order as the track improved, and he also had multiple trips off the road before salvaging what became seventh.

His team-mate Yuki Tsunoda was in contention for strong points despite starting last, but spun at Tamburello at the restart and finished 13th.

Kimi Raikkonen’s Alfa Romeo and Esteban Ocon’s Alpine – another car to lose ground by starting on wets – completed the scorers, with Fernando Alonso and Perez on their tails.

Sebastian Vettel had a miserable race that began from the pitlane after Aston Martin ran out of time for pre-race work on his brakes. That also earned him a 10s stop/go penalty as his car’s wheels weren’t fitted at the five-minute signal before the start. He finally retired late on with a gearbox problem.

Schumacher loses the rear end warming his tyres, and takes off the front wing

The pit lane is currently closed due to the debris#ImolaGP 🇮🇹 #F1 pic.twitter.com/z5KHs5RYzD

Mick Schumacher was another driver who’ll want to quickly forgot this race. He spun into the wall approaching Tamburello while trying to warm his tyres under the early safety car, then had to wait for the pitlane to open before he could replace his smashed front wing.