Max Verstappen has been summoned to the Dutch Grand Prix stewards for allegedly overtaking under red flags during the second Formula 1 practice session on Friday.

Verstappen will see the FIA Formula 1 stewards at 10.45am local time on Saturday ahead of final practice for allegedly overtaking Lance Stroll whilst red flags were shown between Turns 10 and 11. 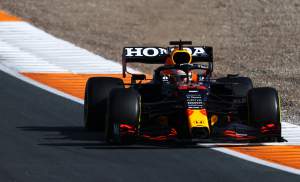 The Red Bull driver was on a flying lap at that point while the Aston Martin was on a slow lap.

He did complete the overtake after the red flag signal was shown but given the proximity of the two cars and the extreme speed offset it would have been difficult for Verstappen to react sooner.

Verstappen audibly lifts as soon as he sees the red light too.

Red Bull team boss Christian Horner said on Friday he doubted anything would come of it.

“Max, as soon as he heard it was a red flag, he backed right out of it,” Horner told Sky F1.

“I was watching the data, he was completely out of it as soon as he got the message of the red flag.”

If found guilty in normal circumstances, the stewards usually hand out a grid penalty to the driver.