Ahead of the Qatar Grand Prix, the stewards from last week’s race in Brazil are still to rule on whether to review what happened in the title rivals’ fight for the win, when Hamilton tried to pass Verstappen on the outside at Turn 4 and both cars ended up off-track.

The incident was noted but not investigated, something Mercedes is trying to change after the fact through the right of review process.

Though Verstappen and Red Bull feel this was just “hard racing”, others contend that the fact Verstappen failed to keep his car on the circuit meant he crossed a line.

He also escaped a penalty when earlier this year the likes of McLaren driver Lando Norris have been punished for forcing another driver off-track even when they themselves had stayed in control.

“Looking at the case compared with Lando’s case definitely we have some questions,” Seidl said.

“Lando got a penalty in Austria for something which from our point of view was debatable. 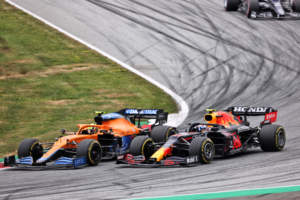 “You can definitely argue what happened there was Lando’s corner, different to what we have seen in Brazil, and therefore we are very interested on what they’re deciding a ruling on.

“The outcome of today’s investigation is a different story or different process, but more [important to] understanding what Michael [Masi] will brief to the drivers tonight in the drivers’ briefing on how they see things moving forward.

“Because I think whatever the outcome is, it will definitely change the approach of the drivers to certain manoeuvres on track. That’s why it’s interesting to clarify.”

FIA race director Michael Masi said after the grand prix that the stewards had opted to apply the ‘let them race’ policy, which effectively takes a more lenient stance to encourage harder racing.

Masi said as they were “give or take side by side” it was “for the benefit of everyone to let them race”.

Seidl believes it is important to clarify the ‘let them race’ principle as it has been inconsistently applied.

“Compared to the past some years ago, I think definitely we have the switch more towards ‘let them race’,” said Seidl.

“It’s just important to clarify that every driver knows what he can do and what he can’t do.”

In Norris’s case, he was deemed to have forced Sergio Perez off-track and into the gravel in Austria this year. 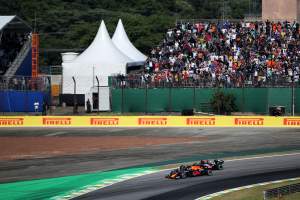 What did Verstappen onboard reveal and what’s still unclear?
Read more

One common observation after the Brazil incident between Hamilton and Verstappen was that the corner’s large run-off area contributed to what happened.

Seidl said “the consequences should not necessarily be part of the decision-making process”.

Another point of contention now is that the matter is still unresolved five days after the grand prix, which Hamilton won anyway.

“The target must be to finish race weekends on Sunday night,” said Seidl.

“And that there are rulings in place that just make sure that it’s closed forever Sunday night.

“At the same time I also understand if there is new evidence showing up and the decision clearly has been completely wrong, it makes sense to correct it.”