Formula 1 championship leader Max Verstappen will receive a five-place grid penalty at the Italian Grand Prix for an engine change.

Red Bull has opted to give Verstappen a fifth internal combustion engine of the season at Monza.

As this is his second violation of the seasonal allocation it only merits a five-place penalty rather than 10 places. 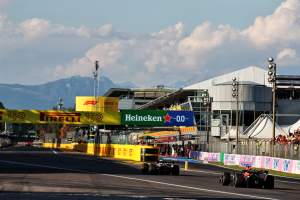 It is a low-cost way of introducing another engine into the pool of usable components for Verstappen for the rest of the season as he closes in on a second world championship.

Red Bull’s potency on the straights and the fact Verstappen won the Hungarian and Belgian Grands Prix from 10th and 14th on the grid respectively means he still starts the weekend as favourite.

Especially as team-mate Sergio Perez has got at least a 10-place grid penalty while drivers from Mercedes (Lewis Hamilton) and Ferrari (Carlos Sainz) will start from the back with multiple engine component changes. Sainz was only on a 15-place penalty initially, but Ferrari’s decision between first and second practice to take a new control electronics triggered an automatic back-of-the-grid penalty.