Yuki Tsunoda has completed his first Formula 1 test in a two-year-old Toro Rosso at Imola ahead of his likely graduation to grand prix racing with AlphaTauri next year, completing the distance required to participate in Friday practice sessions if required.

The 20-year-old Red Bull junior driver, who is currently third in Formula 2 with two wins to his name, completed 72 laps – a distance of 352km – at the Italian circuit in a mixture of wet and dry conditions.

Tsunoda, who is also a protege of engine supplier Honda, is expected to partner Pierre Gasly at AlphaTauri in 2021 provided he secures a full F1 superlicence, which he is on target to do based on his previous results and F2 championship position with four races remaining.

During the Emilia Romagna Grand Prix weekend, AlphaTauri team principal Franz Tost explained that an objective for the test was to complete the 300km in case it is necessary to run Tsunoda in free practice to contribute to superlicence points.

“We want to do a 300 kilometre run with him just to get the permission from the FIA to do eventually FP1 in Bahrain or Abu Dhabi,” said Tost. “We will see if it’s necessary, it depends where he ends up in the championship. If he is within the first four he gets the super licence if he is fifth then maybe he needs two FP1s because then you get a point as well.”

Tsunoda went through extensive preparation in the simulator ahead of his test and said the driving was not as difficult as he anticipated, but he did admit that the physical side was more demanding than expected.

Putting in the laps 💪 @yukitsunoda07 pic.twitter.com/VRLSTAiSiX

“Easier for the driving, but also harder for the more physical [aspect],” said Tsunoda when asked how the experience matched up to his expectations.

“I expected it to be a little bit less hard for the physical [side], especially the neck because I was quite confident I wouldn’t have much tiredness. Even in Formula 2, I don’t feel much – my neck is pretty strong – but after I drove the Formula 1 car today, it was pretty hard, especially in the braking zone.

“The braking power is more than I expected. I need a lot of training until my next events in Formula 1 to prepare.”

Tsunoda also said that the power delivery was more impressive than he expected having made the step up from a 620bhp F2 car.

“After I put down the throttle, there’s big power from the engine, which I don’t feel in Formula 2,” said Tsunoda. “The power is more than I expected. 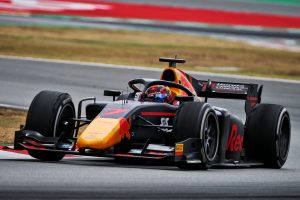 “The first session, it was raining and even then it was really big performance from the initial throttle. That was my biggest surprise today and the second thing is the braking performance in the dry.”

AlphaTauri team principal Franz Tost described Tsunoda’s test as productive and explained the programme that his new driver was put through.

“We had a very productive first test here in Imola with Yuki Tsunoda and we were able to complete 352km,” said Tost.

“It was a bit damp in the morning, so we started the day on full wet tyres. Even so, Yuki got immediately familiar with the car, which means that when we changed to the dry tyres he improved his lap times straight away and it was quite impressive.

“After the lunch break we continued on with new sets of tyres and he improved further, showing that he was feeling more comfortable in the car, lap by lap.

“Yuki gave valuable technical feedback regarding the behaviour of the car, which was in line with what we expected.

“In his last run, he did a race simulation and he was very consistent, which is clear evidence he had everything under control.”

Tsunoda’s next scheduled outing is the young driver test in Abu Dhabi in December. But FP1 outings in at least one of the Bahrain events is possible despite the fact that the final two rounds of F2 will take place on the same weekends.

Completing 100kms during an FP1 session is worth one superlience point up to a maximum of 10 over a three-year period and could be required if Tsunoda slips out of the top four in F2.

“If I drive Free Practice 1 in Bahrain in Formula 1, it’s going to be really tight schedule and also, I need to adapt quickly to each car,” said Tsunoda.

“It’s a big difference, Formula 2 and Formula 1, so it’s going to be a challenging weekend.”