Tsunoda could get FP1 run ahead of likely 2021 race seat

Yuki Tsunoda could take part in Friday practice sessions before the end of the 2020 Formula 1 season as the likelihood of landing an AlphaTauri race drive for 2021 grows.

Long-time Honda protege Tsunoda became a fully-fledged Red Bull Junior in 2019, ahead of a race-winning rookie Formula 3 campaign – his first outside of Japan.

He stepped up to Formula 2 for this season, has won two races and sits third in the championship – on the brink of securing the points he needs for an F1 superlicence. 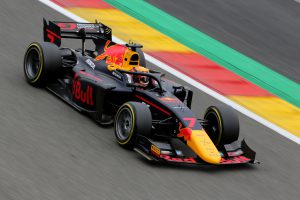 Red Bull motorsport advisor Helmut Marko has told German media that Tsunoda will replace Daniil Kvyat at AlphaTauri next season if he qualifies for a superlicence.

AlphaTauri has already announced Tsunoda will run in a private test at Imola later this month in an older car to get him the 300km of F1 testing he needs to get both an F1 race superlicence and a licence to take part in Friday practice.

There is also a possibility for Tsunoda to make his grand prix weekend debut with an FP1 outing with AlphaTauri this year, which based on the timeline outlined by team boss Franz Tost could be at the Turkish Grand Prix before the F2 season finale in Bahrain.

Asked by The Race if Tsunoda would drive for AlphaTauri in F1 next season should he qualify for a superlicence, Tost said: “The driver line-up is not decided yet for next year.

“The programme with Yuki is the following: we had him in the factory last week to make his seat, because after the race in Imola we will do a 300 kilometre test.

“Maybe, but this is not decided yet, he will do FP1 once, and then he has another two races in Bahrain.

“We will see where he is finishing the F2 championship in regards to the superlicence, then he will do the Abu Dhabi young driver test.

“And then, Red Bull will decide who will be the driver line up for AlphaTauri in 2021.”

Red Bull has Max Verstappen signed up for next season and is keen to keep Alex Albon on as his team-mate subject to the British-born Thai driver improving his recent form.

It has effectively ruled out Pierre Gasly being promoted from AlphaTauri again to replace Albon, stating that AlphaTauri needs Gasly’s experience.

Tsunoda’s graduation, should it materialise, is therefore poised to end Kvyat’s second stint in F1.

He drove for AlphaTauri in its previous guise as Toro Rosso from 2014 before being promoted to Red Bull Racing.

Kvyat spent one full season with the senior team but was then demoted to Toro Rosso a few races into the 2016 season to make room for Max Verstappen.

He was axed by Red Bull completely before the end of 2017, then recalled last year to fill a vacancy at Toro Rosso and retained his drive for 2020 as the team was rebranded AlphaTauri.

“I haven’t got many updates about this so far,” said Kvyat on Thursday in Portugal about his future.

“I’m aware of the situation, it’s very easy. There are not many seats available, but from my side, I can only do the best I can do in the races remaining.”