The three-second estimate that scarred F1 again in Spanish GP

Management isn’t sexy but it is a core part of Formula 1. Always has been, always will be. The Spanish Grand Prix was the latest example of management becoming way too much of a dominating factor, though.

Lewis Hamilton did an exemplary job in containing Max Verstappen early on then pulverising everybody with his pace thereafter.

Unfortunately, this was never really a ‘race’. It was an exercise in eking out tyres to the point that, early on, Mercedes boss Toto Wolff reckoned: “If they would have pushed, they could have gone two or three seconds faster.”

That’s an estimate that scars F1.

This is too extreme and is the enemy of good racing

Fuel loads in particular will always dictate that the lap times are a few seconds off early on.

But nine seconds slower than in qualifying, as poleman Hamilton was in the opening few laps? That’s obscene.

The drivers don’t need to be as quick in the race as they are in qualifying, that would be an unreasonable expectation.

But this is too extreme and is the enemy of good racing.

“The pace was very managed from all three cars at the beginning because we didn’t know how the tyres would behave and how long we needed to go,” said Wolff.

“So, there wasn’t really any push lap at the beginning. And we were able to extend the first stint on the soft.”

Using a very basic method (the usual allowance that 1kg of fuel is 0.03s) we can slash a chunk of time off the early pace – roughly 2.6s a lap on average across Hamilton’s opening stint.

But Wolff’s estimate isn’t referring to fuel. It’s about management. Of course it is. In modern F1, it always comes back to tyres.

“It was just in the management and the strategy that I chose in terms of when and where to push,” Hamilton said of his first stint. 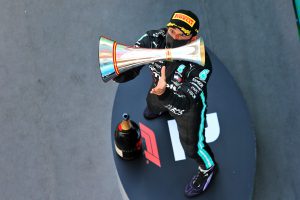 Mark Hughes: Hamilton’s perfection eliminated every ‘what if’
Read more

“I was able to implement that, not necessarily what the team initially thought we needed to do. The execution that was just on point.

“I managed early on with Max behind me, and then none of us expected the tyres to go as they did. But I had protected them pretty well and I thought that I could at least easily reach my target stop lap, which was quite a bit earlier than when we went to.”

We need to take a few other factors into account but an analysis of Hamilton’s race, and the helpful addition of team-mate Valtteri Bottas’s late push for fastest lap, helps us put together a blurry picture of just how much Hamilton was holding back early on.

And the answer is that Wolff’s 2-3s estimate seems pretty accurate. Which is… sad.

In Hamilton’s first stint his average lap time was a 1m23.8s. As aforementioned, with our basic fuel correction we may lower this to 1m21.1s. But the entirety of the first stint is a red herring because it was really the first few laps in which Hamilton was in such extensive management mode.

Over the first eight laps his average was actually 1m24.5s (‘fuel-corrected’ to 1m21.6s). The rest of his stint was 1m23.3s (1m20.9s). Later in the race, in his final stint, Hamilton’s fuel-corrected average dropped further, to 1m20.7s. And that was on a theoretically slower set of tyres.

In tyre management alone, we can logically assume that Hamilton was holding back to the tune of at least a second per lap early on. Then if we look at Bottas’s final stint, we can find a chunk more time.

Before Bottas pitted late on to gun for fastest lap, he was completing a stint on an average of 1m21.8s. Then, just before pitting, he suddenly pumped in a 1m19.8s.

So, at the end of a stint, with used tyres, Bottas was able to suddenly improve by two seconds. He then went another 1.6s faster on fresh tyres and, presumably, with a bit more engine power in order to snatch his bonus point.

We cannot account accurately for the impact of heavy fuel on tyre wear and performance potential, how much drivers were pushing, what engine modes were available, track evolution – all the factors that impact a driver’s lap time.

But we can surmise, not unfairly, that Hamilton was lapping between 1-2s a lap slower because of tyre management alone. Which makes Wolff’s estimate that the leaders were actually capable of going up to 3s faster perfectly plausible. 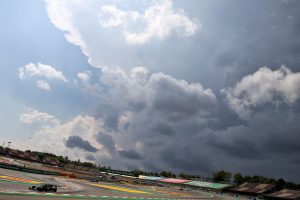 Can engine mode ban save 2020 season from tedium? Our verdict
Read more

If Hamilton and Verstappen were lapping seven seconds slower than their car’s peak performance potential in the race, but circulating a second apart and with Verstappen applying as much pressure as he could muster, the delta between quali and race pace would not matter. And rightly so because it is largely irrelevant.

The problem is that this massive gap is exaggerated by the constant need to manage a problem drivers don’t even know will materialise. There’s skill to it, and once free of the worst of the tyre management there’s no doubt Hamilton was operating at an extremely high level on Sunday – he ranks it among his best victories for a reason.

But those early laps should be a fascinating sequence that sets the tone for the grand prix. Not the best drivers in the world treading on eggshells for fear of tyre worry that is ultimately not realised.

“We really need to put a lot of pressure on Pirelli for the future” :: Lewis Hamilton

The concerns dominated the opening part of the grand prix and plotted a course for a dull affair in which Verstappen could not give chase to Hamilton for fear of wrecking his tyres and Bottas couldn’t get back past Verstappen after losing track position early on, because he couldn’t stay close enough in the final sector to launch an attack into Turn 1.

This is really nothing new. But it’s another example of why F1’s long, misguided pursuit of higher-degradation tyres creates conditions for bad racing, not entertaining racing. So, much-maligned tyre supplier Pirelli is under pressure to go in the other direction for 2022.

This year’s tyres are last year’s tyres because Pirelli’s 2020 specifications were rejected after being trialled late in 2019. They will be used again next year, too. So the main focus is in 2022, when new technical regulations come into force, a budget cap will have been in place for a year, and the idea is that F1 gets much more entertaining without the need for variables like rain, or tyre failures, or massive tyre wear.

Hamilton seized the opportunity post-race to point out “we really need to put a lot of pressure on Pirelli for the future”. It is part of the unofficial strategy of the Grand Prix Drivers Association to bang that drum whenever possible.

For many, many months Hamilton and others have pleaded for tyres that can be pushed without being destroyed. Right now, the softer compounds can’t live with a car moving around that much. Pushing too hard will destroy performance and longevity. Following another car too closely will do the same. So where is the capacity, let alone incentive, for a driver to attack in a race?

“For 2022 we need a better tyre,” said Hamilton. “We need a tyre that gives us more grip, better safety – that’s a key matter there – and enables us to drive closer to cars and give you guys, and the fans, better racing.

“Right now, we’re managing to a serious amount. And I don’t think that’s what the fans want.

“That’s not what a racing driver wants, to have to manage behind the car multiple seconds behind because the tyes are not good enough.

“So, we want to help Pirelli to make a better tyre if they can. And that’s obviously the question.”

The odd dig in Pirelli’s direction is designed to put pressure on the company and F1 to throw everything they can at creating tyres that give the drivers what they want.

That’s unlikely to guarantee every race becomes a series of sprints between pitstops that brings out the best in man and machine, but it’s got to be better than the alternative.

Some tracks lend themselves to exacerbating this problem and Barcelona is certainly among them.

It’s just a shame that F1 continues to be vulnerable to such predictability. And unless the tyre situation changes, the potential of the 2022 regulations and F1’s bright new future will be restricted.