Carlos Sainz Jr’s first Ferrari Formula 1 test is yielding “lots of details” he believes will be useful in his first year with the team, despite taking place in a 2018 car.

For Sainz, those details relate specifically to Ferrari’s systems, processes and people and the differences to his previous employer McLaren.

But they are not the only revealing elements from his first on-track appearance in red.

Other particulars of his Fiorano run in the SF71H also contribute to this being a telling example of what Sainz’s Ferrari stint will be like – at least in the beginning.

THE 2018 CAR IS GENUINELY USEFUL

Sainz says his first test day went “more or less as planned” and that “there’s always some things that you expect and others that you don’t”.

“Once you put your head down and you go into full testing mode everything felt very normal and I could get the day done and I could do my laps, no mistakes and get everything done. But until then, you never know.”

That attitude is indicative of a pursuit of marginal gains, wanting to extract whatever’s on offer. Even a small setback is still a setback.

A 2018 car test is of limited value to a driver like Charles Leclerc, who ran on Tuesday, beyond blowing off any cobwebs. But for a newcomer like Sainz it’s a first chance to explore the specifics of Ferrari trackside, if not the car itself.

For example, driving something built to outdated aerodynamic specifications – the 2018 car preceded a significant front wing change in 2019 – means the car Sainz was behind the wheel of was of far less relevance than the wheel he was using. 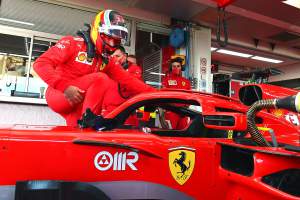 And he says there were “many areas” that will be useful when he finally drives the 2021 car and gets into the season.

“I’m going to also practice a lot talking with my engineer, practice changing all the switches on the steering wheels – as you guys can imagine, Formula 1 cars nowadays have a lot of procedures – and getting to see my mechanics that I’m going to work with.”

Sainz is far from the first driver to talk like this. It’s a bit like Fernando Alonso with the 2018 Renault. No doubt Sebastian Vettel would run in a 2018 Force India if he could.

“There’s a lot of details out of this test that I’m going to find useful,” Sainz insists.
“Overall, the day went really well.”

THE STRENGTH OF THE FERRARI CONNECTION

Sainz started his McLaren career on the front foot by throwing himself into things early to try to gel with his new team as quickly as possible.

It’s tougher to do that in COVID times but Sainz has been a devoted student at Maranello. He has reportedly spent a lot of time at the factory through January, meeting with the engineers and driving the 2021 car on the simulator plenty.

Squeezing everything out of a test in an old car sends a good message to his new team, especially as he’s working around his side of the race garage this week. The enthusiasm that radiated from Sainz at the end of the day helps too.

“My first impression, you cannot imagine,” he says. “It’s impossible for me to put into words really what goes through my mind.

“From entering the Fiorano track and entering more of the Ferrari world, seeing the mechanics, seeing the car with the number 55 on it, seeing your name…

“It sounds like a small detail, but seeing your name on a Ferrari car with your number is something that you will never forget.

“Seeing that was just incredible.”

Last year, Sainz revealed that the emotions of his Ferrari move first properly hit him during the Monza race weekend, when the few people he did encounter around the COVID-19 protocols gave him something of a hero’s welcome.

Sainz was signed to Ferrari for 2021 but still racing for an opposing team at this point. And the reception meant he was gutted there were no fans there, as he realised how incredible it would be. 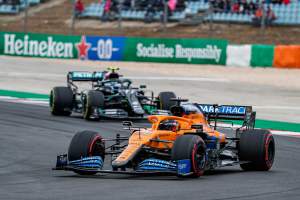 Ferrari is an emotive team for anybody, but it’s clear that Sainz quickly bought into it even in 2020. Now he’s wearing red, he’s trying to forge a strong connection as quickly as possible.

He even saw some trackside banners at Fiorano on Wednesday, emblazoned with ‘vamos Carlos’ and ‘smooth operator’ (a reference to his long-running radio singalong joke at McLaren).

Sainz had risen to a 6.30am wake-up call before his first test with “goosebumps”. For now, the emotional significance of his Ferrari opportunity has been almost as strong as the professional element.

If that translates into a lasting connection then Ferrari can bring the best out of Sainz as McLaren did, as it’s absolutely evident from his McLaren spell vs the Red Bull/Renault period before it that Sainz performs best in an environment that loves him.

It’s questionable, given he will be the well-established Leclerc’s deputy at Ferrari, whether he’ll get quite the same affection back in the long-term. But at this stage there is no harm in him revelling in the Ferrari honeymoon.

THE APPLE’S STILL CLOSE TO THE TREE

Both Ferrari and Sainz highlighted the presence of his father Carlos Sr in their end-of-day communication of the test.

Sr’s attendance came at his son’s request, Ferrari was evidently happy to facilitate it, and that bodes well for Sainz having a vital support mechanism this year.

Really proud to see @Carlossainz55 wearing red and driving the Ferrari. All the best for this new challenge!

Double World Rally champion Carlos Sainz has been an immensely strong figure in Jr’s career. That might have caused some friction in the past at Toro Rosso, alongside another prominent father-son pairing in Jos and Max Verstappen, but as a well-connected, well-respected driver-turned-paddock-diplomat there’s no doubt Sr (pictured in the Renault garage during Jr’s time there) has been an overwhelming force for good for his boy.

And family is still immensely important to Carlos Jr, which is why he spurned a move to Monaco and stayed in Madrid.

“One week ago we were at home and it was a conversation that was always going to happen,” says Carlos Jr.

“It was time to go to Fiorano and we looked at each other and I said, ‘Look, you want to come, I want you to come, this is a very special day, I know there’s COVID PCR tests to do but I would like you to be present on my first day in Ferrari’.”

It speaks volumes that Jr wanted his father there to share in the significance of this test. It’s important because it’s clear Sr is going nowhere.

Having someone familiar in his corner at Ferrari is almost certainly going to be to Sainz’s benefit. Especially given how Leclerc-focused things will be at times, how much pressure there will be to perform, and the potential for things to get difficult.

There is intangible value in a driver in a pressured environment like that being able to see a familiar and supportive face almost as soon as they are out of the car.

“I think he was nearly more nervous than I was,” says Sainz. “Probably because I was very focused and from the big picture he knew what a great day it was for me while I was having to stay focused and do the work.

“I think he enjoyed it a lot. Thanks to Mattia [Binotto, team principal], Laurent [Mekies, sporting director] for showing him around and allowing him to be here today enjoying a very special day with his son.”