Honda does not always wheel out the big guns in celebration. However, Pierre Gasly’s Italian Grand Prix was something special, “a dramatic race” that left Honda CEO Takahiro Hachigo feeling “very nervous and excited from start to finish”, at which point he had a tear in his eye.

Nobody needs to play up how much that shock Monza victory meant to Gasly or his AlphaTauri team, 12 years on from the only win of its Toro Rosso era. But it meant more to Honda than many probably realise.

“Pierre has shown a spirit of never giving up throughout his career and grabbed his opportunity to take the win yesterday, after finishing on the podium for the first time last year in Brazil,” said Hachigo.

“His attitude embodies Honda’s ‘Challenging Spirit’ and this victory encourages us very much. 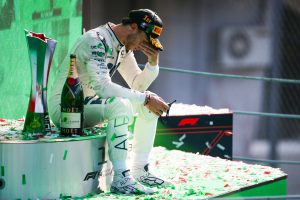 Why even Hamilton is in awe of Gasly’s rise, fall and revival
Read more

“I would like to send my appreciation to all the people in AlphaTauri, starting with Franz Tost, for their hard work and determination.”

The significance of a Gasly/AlphaTauri win to Honda is more than just the sensational nature of underdog success. It’s also not limited to the major milestone it made Honda reach, as the first engine manufacturer to win with two teams in the V6 turbo-hybrid era.

To understand why this matters so much you need to appreciate the vital place AlphaTauri (as Toro Rosso) and Gasly have in Honda’s F1 story and the affection that fostered.

A bitter McLaren divorce put Honda on the brink of leaving F1 in 2017 as three hard seasons seriously damaged its reputation.

One year later, the organisation was revitalised, had a Red Bull deal confirmed, and was on the path to becoming a race-winning manufacturer again.

As Honda’s F1 managing director Masashi Yamamoto tells The Race the morning after the victory before, there is no F1 success for Honda without Toro Rosso.

“We have learned many things from McLaren until 2017 – however, compared to their days, the difference is Toro Rosso were 100% open about the communication to us,” he says.

Gasly being a consistent character in the story is beautifully fitting. He has a kinship with Honda that stretches back beyond its F1 programme

“The Red Bull partnership cannot be told without the success or the step forwards we made with AlphaTauri/Toro Rosso.

“We don’t know how much we can say thank you for that contribution to Franz Tost and the team. It is right that the success and step forwards to now is based on the success with the Toro Rosso relationship.”

Gasly was the driving force of that season. In Toro Rosso-Honda’s second start he eclipsed anything Honda had achieved in three years with McLaren by finishing fourth in Bahrain. Two big opportunities followed and Gasly was seventh in Monaco then sixth in Hungary.

There were other, more subtle performances that helped highlight Honda’s progress too, such as grabbing a point in the Belgian Grand Prix at the power-sensitive Spa circuit.

But the strong performances in the opening months of the season were the most valuable as this is what convinced Red Bull to leave Renault and commit to Honda properly.

Gasly being a consistent character in the story is beautifully fitting. He has a kinship with Honda that stretches back beyond its F1 programme. After winning the GP2 title but being denied a Toro Rosso F1 seat, Gasly was placed in Japan for a season in Super Formula, driving for Honda’s Mugen team.

“People love that story. This morning some people checked to buy AlphaTauri caps in Japan but it was all sold out already” :: Masashi Yamamoto

The lack of opportunity, and perhaps faith, Gasly was afforded could have broken him. Especially as Japan’s top single-seater series is not an easy transition for a driver from Europe. But he excelled, building a vital Honda bond in the process.

“I met Pierre for the first time in the beginning of Super Formula in 2017,” says Yamamoto.

“It was particularly important because he was able to understand Honda’s philosophy, how we work, the Japanese mentality, those kinds of things. It was very important for us and for him to understand each other through one year.

“He was desperate to get an F1 seat after becoming champion in Super Formula, and beyond that, he was thinking of winning in F1. We felt it very strongly, and we wanted to contribute to his success somehow as Honda.”

Gasly could, perhaps should, have won the title he craved but a typhoon cancelled the final round and he missed out by half a point.

It was a very impressive effort for a series rookie nonetheless, and he’d left a lasting impact on Honda and the Japanese fans – “his attitude, very passionate and strong-willed, with a very clean racing style, was liked very much,” says Yamamoto.

Honda has been with him every step of the way since, through the highs of 2018, the low of Red Bull demotion in 2019, that second-place finish in the Brazilian Grand Prix, and now this win.

“People love that story,” says Yamamoto. “This morning some people checked to buy AlphaTauri caps in Japan but it was all sold out already.

“He is really popular, and his story is really giving people sympathy.” 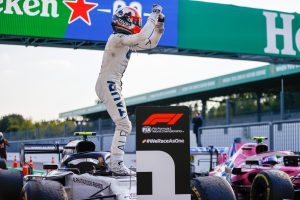 It is difficult not to become emotionally invested in Gasly’s comeback tale. Honda admires it because it embodies a fighting spirit and a determination not to give up. Where Red Bull’s belief in Gasly has wobbled from time to time, Honda just seems unshakably supportive.

“He is part of the Honda family,” says Yamamoto. “We are really glad that he could finally win with us, especially because he was demoted last year from Red Bull to Toro Rosso.

“It was the biggest difficulty. But fighting against the difficulty, the never-giving-up spirit from Pierre, is something similar to Honda. And we’re really glad that he has finally overcome that and got the victory.

“From the beginning of this year we see his speed and his will, he’s really desperate to get a result. We want to support him very much as Honda.”

That dynamic strengthens the place the team now known as AlphaTauri has in Honda’s heart and history. It creates a team and driver combination that Honda truly cares about.

Red Bull and Max Verstappen will win Honda more races and more headlines and have banked a special place in Honda’s history as the combination that ended its drought and made Honda an F1 winner again. Regular podiums, more victories are underlining that. Maybe, just maybe, Red Bull and Verstappen will make Honda a champion too.

AlphaTauri’s glory days will be few and far between by comparison. But for Yamamoto and Honda, they are an opportunity to put their often-overlooked ally in the spotlight. And glory days come no bigger than AlphaTauri winning its home race.

“It’s true that Red Bull becomes the main story for us in many situations,” he says. “However, AlphaTauri is still very important for us.

“When they are on the podium, they say Scuderia AlphaTauri Honda, which never happens with Red Bull Racing at the moment. In that sense, the team is really important for us, those people, and that’s the reason also we are very glad.

“It was the 50th race with Honda, it was one of the milestones and an iconic race. The fact that we could win there was really big. And Franz was really happy as well.”

Gasly’s success in the team’s first year as AlphaTauri helps it in its quest to forge its own identity.

The reality for the team, as in its Toro Rosso era, is its existence hinges on supporting Red Bull’s ambitions. For a long time that was in preparing drivers for the senior team as the final part of the production process for Red Bull’s would-be superstars. With Honda, it became Red Bull’s controlled test environment. Now the AlphaTauri name reflects Red Bull’s fashion label.

But once Red Bull had seen enough to commit to Honda, and Toro Rosso had facilitated aggressive development from the manufacturer through the season, without criticism or pressure around grid penalties and setbacks, the second team had served its primary purpose to both.

Cold-blooded and clinical it may seem, there was little reason from a business or sporting sense for Toro Rosso to be anything more than just Honda’s ‘other’ team.

But that’s not how Honda sees it. Honda doesn’t refer to AlphaTauri as a customer or a second team, but a sister team to Red Bull. In the same way, it doesn’t view Gasly as a failed Red Bull driver, or damaged goods.

Gasly says the team feels like his family. It’s why he’s so comfortable there, and how he has recaptured his form so brilliantly. Honda, something he has grown to know so well over many years, is a part of that. And Yamamoto is “really glad” Gasly sees it this way.

“The connection between us, Pierre and those at Toro Rosso and AlphaTauri is really strong,” says Yamamoto.

“We should say we love each other. It’s really nice to be with them. It is a special team.”