An ominous sign of how long Hamilton’s domination will last

Plaudits rained down on Lewis Hamilton as much for the way he won his seventh Formula 1 title as the historic achievement itself. Justifiably so given the quality of his Turkish Grand Prix victory.

The biggest compliment that can be bestowed on his victory though is it showed why he will probably not relinquish his grip on F1 until he walks away from racing. It’s not that Hamilton may or may not have won that race in three or four different cars. It’s that in exceedingly difficult circumstances, up against Hamilton no other driver could win it regardless of their car.

It was a reminder that for all the potential we see in the likes of Max Verstappen and Charles Leclerc, all the success of Sebastian Vettel, all the promise of Valtteri Bottas ‘2.Whatever’, nobody’s quite got the range of skills that Hamilton has.

True, the race came towards Hamilton rather than being the unlikely charge to victory it may have initially appeared. But far from being ‘another’ race in which Hamilton won because in the end he still had the fastest car, the Turkish GP showed the futility of the ‘it’s just the car’ criticism that continues to be used to pull Hamilton down.

The reason for this is that the different phases of the race Hamilton had to go through to win were the same phases that caught out the other drivers.

“It is because he can read a race like he did and he manages the tyres and even when he dropped back he actually stayed nice and calm and could see the bigger picture.

“It’s one of those races where number one is ‘have you got the car pace?’, and then the next thing is ‘right, is the strategy or the opportunities going to come towards you?’.”

Several drivers had their turns with these on Sunday but only Hamilton had both when it mattered – at the end. That’s what made this a textbook Hamilton performance, an example of why he’s a seven-time champion and why he has dominated this season.

For example, unlike Verstappen, who got reckless behind Perez in the pursuit of track position, Hamilton has greater patience. That is partly assisted by the performance of his car, knowing the race should come towards him even when things have shifted briefly out of his control. Whereas Verstappen, never knowing for sure if his Red Bull has a shelf life for being the quickest car on-track, seeks to make hay while the sun shines. 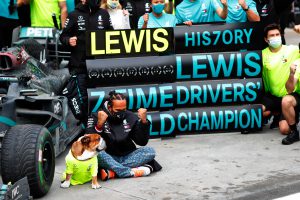 However, particularly in the first half of the grand prix, it was easy for Hamilton to panic as things got tricky around him or grow restless stuck behind Vettel’s Ferrari and make a costly error. But he knows that if he’s quick, things can go his way. And he can trust his team to have done its homework and know that the reasons that made its car weak over one lap (slower tyre warm-up) in unique conditions in Turkey should still be its ace card when it mattered (superior stint longevity).

For Hamilton to have any chance of victory on Sunday he had to keep himself in the fight when he didn’t have the quickest car, trust that the race would come towards him, and execute when he had the opportunity to do so.

Team-mate Bottas had the same opportunity but removed himself from the picture almost immediately, first spinning at Turn 1 (partially distracted by a rotating Esteban Ocon) then an out-of-control move half a lap later at Turn 9 that meant he clattered Ocon and bent his own steering.

Hamilton’s race wasn’t perfect. He had a great start and ran third but lost track position with a mistake halfway round the opening lap, then made another minor error in the second stint while pressuring Vettel. 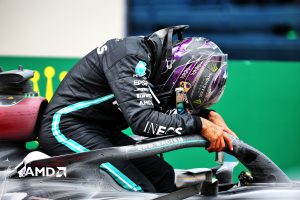 Like every driver in what Hamilton called “the toughest circumstances” he had setbacks. But the reason he was able to reflect on it as a “very complete day” is that Hamilton’s mistakes were never race-wrecking and he made sure he was in position to strike when it mattered.

“Where you started to think ‘actually we can do anything here’ was when people started to drop off with the inters, they were taking another set,” said Shovlin.

“And about the same time you’re thinking, ‘this track isn’t going to dry’. So, there’s one option to go to the end. We’re realising this could well be about getting this inter set to the finish because we’re never going to go for dry tyres. And this is where all the opportunity lies.

“Time and time again, it’s the sort of thing that Lewis has shown that he knows how to do and we’re not coaching him from the pitwall. He just knows what to do.”

Hamilton’s deftness of management with the intermediates was matched only by Sergio Perez, another who shares a mastery of the dark art of tyre whispering. But marrying that feel for the tyre with enough pace to gain track position was something only Hamilton could achieve. He rode through the graining phase on the intermediates that Vettel, for example, misjudged and took too conservatively.

“The thing that won it for him today was just how he looked after the intermediate tyres, how he was able to tell us, ‘They’re fine, don’t worry, I’ll get to the finish’,” said Shovlin.

Hamilton is the only leading driver who can be banked on to execute that kind of plan. He wins races like these for the same reason he was able to win the title at the same time: he’s better at adapting than a driver like Bottas, he’s faster than a driver like Vettel or Perez, he’s calmer in 50/50 moments than a driver like Verstappen and less likely to make a mistake under pressure than Leclerc, who looked set to bank second place on the final lap then locked up and slid to fourth.

He has long since lost the impetuousness that still catches out Verstappen and his judgement is superior to Leclerc’s, who while arguably the most well-rounded of Hamilton’s would-be successors is still not the finished article and prone to beating himself up because of it.

Hamilton, at 35, is not a declining power. At the very least he is a consistent benchmark. He may even still be improving. And that is part of what makes his Turkish GP performance so depressing for his rivals. Their time will come, but not yet.

Give Verstappen and Leclerc a car to fight for the title and they are undoubtedly good enough and well-rounded enough to take the fight to Hamilton. Are they ready to beat him? Exceptional though the circumstances may be, Turkey would suggest not. 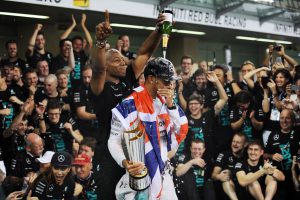 Because they still have tiny chinks in their armour while Hamilton looks stronger than ever.

Couple that with the fact that Verstappen and Leclerc are also unlikely to have machinery to challenge for a title before 2022 at the earliest, and why should Hamilton’s domination of F1 end next year? He may well expect a car advantage again in 2021. And he has displayed an unrivalled skillset which means he can probably overcome a new threat if he engages in a straight fight.

The only immediate obstacle to Hamilton’s enduring supremacy, it seems, is himself. But as he said shortly after his victory: “I feel like I’m just getting started.” So if he keeps racing in F1, he’ll keep winning in F1.

His words and his performances suggest Hamilton will only be dethroned the hard way – car advantage or no car advantage.