The non-F1 adventures Norris could have with McLaren - The Race
Skip to content
Formula 1, IndyCar, Touring Car, WEC/Le Mans, WRC/Rally/Raid

After agreeing his new longer-term McLaren Formula 1 deal, Lando Norris dropped a big hint that he’d like to explore opportunities beyond F1 with the brand in the future.

Given McLaren currently has an IndyCar team too, and has talked of participating in various other series, while team boss Zak Brown also has his own United Autosports team, Norris isn’t short of options.

Romain Grosjean has sent F1 interest in IndyCar through the roof, but don’t expect Norris to be going Stateside any time soon.

There’s so little testing in IndyCar these days that it was a big factor in Jenson Button cancelling his switch to McLaren’s own team in the series for 2021, and with Norris, there’s no way he’d be able to get the proper amount of preparation done to be confident of hitting the ground running in any IndyCar race. 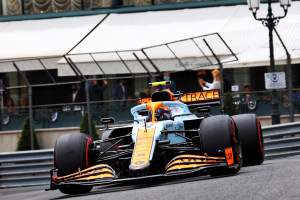 Yes, Fernando Alonso did contest an Indianapolis 500 while racing for McLaren in F1, but he had to miss the Monaco GP to do so and it’s hard to see Norris being granted – or even wanting – that given McLaren’s increasing competitiveness.

There’s no doubt Norris’s car control would translate well to IndyCar. It’s more on the strategy side and with things like restarts that the rigours of IndyCar racing would prove difficult. The field is so close and competitive that you can’t afford to show up unprepared – other ex-F1 drivers have proven that.

Having the IndyCar team – Arrow McLaren SP – does make a one-off feel logical, but Norris – already an IndyCar race winner in its iRacing series – has already said it would be unlikely he’d entertain the series before achieving his goals in F1.

The prospect of seeing Norris cresting Brock’s Skyline at Bathurst in one of Walkinshaw Andretti United’s new Gen3 Chevrolet Camaro Supercars – provided the team doesn’t make the switch to the Ford Mustang in 2022 – in the near future is certainly something to whet the appetite, isn’t it?

Through Zak Brown’s shared ownership (the United bit) with Michael Andretti and Ryan Walkinshaw, McLaren has a small role in the everyday running of WAU in the ultra-competitive Australian Supercars series.

Norris has already utilised Brown’s connections within the team to land a couple of wildcard appearances in last year’s Supercars esports series, and the Briton’s personality and sense of humour went down a treat with the local audiences and TV production as witnessed by Norris’s live Twitch stream around those two events.

Of course, esports and the real thing are two vastly different affairs, with the concrete walls at McPhillamy Park or The Cutting presented a more robust obstacle than anything in iRacing.

Just ask Norris’s potential team-mate at WAU Chaz Mostert, who suffered multiple broken bones when he crashed his Ford Falcon at the Dipper in 2015. The ‘Mountain’ is an unforgiving place.

That said, wouldn’t it be great to see Norris take on Australia’s – and New Zealand – best as a wildcard in the southern hemisphere’s biggest race?

Single-driver third car wildcards are allowed in Supercars for races outside of the Bathurst 1000, but it’s unlikely that a) Norris’s schedule would make this feasible and b) he would have the time to get properly up to speed on his own, unless that wildcard was conducting double duty on the Australian Grand Prix support bill.

Therefore, any chance of Norris racing in Supercars would probably come at Bathurst as a co-driver to one of WAU’s drivers, currently Mostert and 2019 Super2 champion Bryce Fullwood.

Bathurst is generally a six-hour(-ish) race with multiple stints and driver changes involved. Given Norris’s smaller stature versus Fullwood’s height, teaming up with an equally affable and fun-loving Mostert might be the perfect partnership.

Norris saw from an early stage of his professional career the benefits of diversifying away from the norm (in his case the junior single-seater ladder to F1) through being a team-mate to Fernando Alonso at United Autosports at the 24 Hours of Daytona in 2018.

Whether, at the age of 18, he realised it at the time or not, his appreciation of racing beyond the F1 bubble will have been fully cultivated that winter weekend in Florida.

That he did so with Alonso as a team-mate is intriguing. That he also did so by completely excelling during the race was memorable.

Norris hunting down the sister LMP2 car driven by Paul di Resta and then batting off heavy rain in his first foray into fully dark conditions was astoundingly bold and captured the imaginations of all who witnessed it.

That taste of the extremes of endurance racing was a heady cocktail and will to some extent have intoxicated Norris.

The question now is really whether he is given the freedom to explore endurance racing once again.

From a realism standpoint it looks very tough to shoehorn into what will probably be an expanded F1 calendar from 2022 onwards.

But with Daytona in the last weekend of January it would seem a possible second crack at winning a shiny Rolex is entirely feasible.

With a sportscar boom from 2022 onward just around the corner, expect more F1 cameos along the lines of Nico Hulkenberg (2015) and Alonso (2018-19) to occur around Le Mans, and expect Norris to be the front of the queue when United Autosports inevitably gets hooked into an LMDh programme.

Norris is no stranger to Brown’s personal racing car collection and if he was wanting to race something a bit different from the norm, there’s every possibility that one of these cars could be the perfect fit.

All of Brown’s racing cars are either already running or at least capable of running and there are plenty of viable championships and events that they would be eligible for.

If Norris wanted to tackle something aggressive, powerful and frankly outright frightening, then the Dyson Racing Porsche 962 could be right up his alley, along with the 1982 Daytona 24 Hour and Sebring 12 Hour winning Porsche 935.

Either machine would be completely different to anything Norris has raced in before, so if he were to compete in either of them he would no doubt have to adapt his driving style a lot to get the maximum out of the car.

Both cars have been raced fairly recently by Brown in the Group C and GT2 historic championships, so it isn’t beyond the realms of possibility that this could become a reality for Norris.

But, if he was looking for something more familiar and closer to home, there’s an array of Formula 1 cars in Brown’s collection that would be eligible for the Masters Historic championship.

With cars such as the Lotus 79/2, Williams FW07, McLaren MP4/6-6 and the Ferrari 310B at his disposal, Norris could have his pick when choosing the class he’d like to race in. And being F1 cars, you wouldn’t expect he’d need to change his driving too drastically to reach the car’s limit.

It’s unlikely that Brown would let Norris loose in any of these cars for anything other than a bit of fun at a private test, but if he were to have the opportunity of racing any of them in a competitive manner it might just give him a sense of enjoyment he never knew he was missing.

Of course, competing in a more traditional circuit racing series alongside Formula 1 might make the most sense for Norris, but as Jenson Button and Jamie Chadwick have proven, you can complement a background in single-seaters with radical off-road racing in Extreme E.

With only five events on the schedule, a calendar clash for XE and F1 is perhaps not as much of a hurdle as it would be for other series, while Norris’s willingness to try anything – albeit virtually – during the downtime of 2020 means that adapting to the all-electric Odyssey 21 and Extreme E’s hugely varied courses shouldn’t be too tough either.

What’s more, Norris’s active social media presence would be the perfect fit for XE, and could give him and United Andretti an advantage in the Grid Play stakes, too.

At face value, putting F1’s brightest rising star in what is essentially an off-road truck series might seem an odd move, but it could be a better fit than you think.

But given Andretti United’s solid male driver choice of 2019 World Rallycross champion Timmy Hansen, the likelihood of it actually happening in the real world is rather slim. In a short calendar, Hansen’s not someone you can afford to ask to give up his seat for a ringer.