Max Verstappen and Red Bull still feel extremely aggrieved over his British Grand Prix crash but one “kind of lucky” part of the accident could have a positive outcome this weekend.

Honda will use Hungarian GP Friday practice to evaluate the power unit that was in the car when Verstappen crashed, as it hopes to avoid the inevitable grid penalty that will come if those components cannot be used again this season.

Verstappen’s 51G impact with the barriers on the exit of Copse, after contact with title rival Lewis Hamilton, left his car heavily damaged. Television images showed the right rear completely destroyed, the bodywork torn away and the Honda power unit exposed.

Red Bull’s alleged repair bill was more than £1m and the impact of such expense in F1’s new-for-2021 budget cap world was a clear concern for the team.

But Honda had its own worries after the crash.

Drivers are restricted to a certain number of engine components during the season. Verstappen is on his second set of the major ones – the internal combustion engine, MGU-H, turbocharger and MGU-K – that are limited to three before grid penalties start being applied. Verstappen can therefore use one more all-new power unit without an immediate grid penalty.

However, without having use of the Silverstone components again, Verstappen is looking at a highly likely penalty later in the year as there are almost certainly too many race weekends left to complete with just one more fresh power unit and the version that was used for the opening six weekends of the season.

It’s not uncommon for engines to be damaged in such violent crashes. And the sight of Verstappen’s crashed car being recovered from Copse left Honda fearing the worst.

“When most people, including Honda engineers, saw Max’s car like that, we saw the rear end and thought – no more,” Honda’s F1 technical director Toyoharu Tanabe told The Race, making a cut-throat gesture to signal the expected demise of the power unit.

But the planned FP1 use of the same parts is a result of a small slice of fortune in an otherwise extremely costly crash, as the angle of impact meant the power unit has mostly survived the hit.

Verstappen being helped out his car

The race has been red flagged 🚩#BritishGP 🇬🇧 #F1 pic.twitter.com/eXof6ttdob

“When the car came back into the garage, when I looked at the detail, I noticed not a big impact on the power unit itself,” Tanabe said.

“The impact forces were very high. But the contact angle is kind of lucky from a power unit point of view. Not completely on the rear side, or side on.

“Visually, when we saw the power unit in the garage, we thought it was not too bad.”

Honda sent the engine to its Sakura facility while the battery and energy recovery system components were analysed at Milton Keynes.

Some parts were changed without having to break the FIA’s seals – so none of the changes relate to parts that could trigger a penalty later in the year – and Tanabe said that in the context of what static checks can be completed, “everything looks OK”.

Honda’s hope is that the power unit will run without fault and without any anomalies appearing on the data in opening practice at the Hungaroring and if so, it will continue to be used for the rest of the weekend. 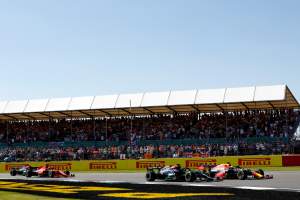 “Until we fire up the engine and run with a wide open throttle and high boost, everything in normal conditions at the track, I cannot tell 100%,” Tanabe admitted.

“Additionally, once you think everything’s OK, in the future I don’t know if something related to the impact gives us some damage somewhere.

“It’s very hard to tell but I can tell something after FP1.”

If the title battle remains as closely fought as it has been so far, with Verstappen now leading by only eight points and Red Bull’s constructors’ lead just four points, avoiding a grid drop is the sort of variable that could make a big difference at the business end of the season.

50 mins ago Rallycross No Comments