Finishing second to Valtteri Bottas matched his second place in Spain but being only 7.7s behind was as close as the Red Bull driver has come to winning since he actually did so at Silverstone. It was also Red Bull’s first podium at Sochi in seven attempts.

Verstappen was even able to chip away at Bottas’s lead, and never looked close to being attacked by the recovering Hamilton.

But some underlying losses betray those peaks. Verstappen’s return to the podium after a three-race absence came with a reminder of Red Bull’s lingering deficits.

Why Sochi looked so good

Once Hamilton served his penalties and removed himself from victory contention, Verstappen was free to shadow Bottas unopposed after being passed on the opening lap.

That was almost an inevitability given the power of the tow at the start at Sochi, so it was no great surprise or disappointment. What was more significant was that Verstappen even had to be passed in the first place, thanks to a sterling qualifying effort.

Red Bull team boss Christian Horner reckoned the “sensational” Q3 lap was Verstappen’s best qualifying performance with the team and the Dutchman was quite pleased with himself afterwards as well.

That positivity continued into the race, or at least in the second stint. Verstappen had faded on mediums but when both he and Bottas were on the hards, Red Bull stacked up well.

Accounting for a couple of key outliers Verstappen’s average laptime across the entire second stint was only 0.028s slower, with Bottas doing most of the damage in the laps immediately before and after his pitstop.

That meant Bottas was probably in race management mode, but Verstappen was not on the limit either. The end result, 7.729s behind and exactly 15 seconds clear of Hamilton, suggested Red Bull was a pretty close second-best on a track that normally treats it unkindly.

Verstappen’s Sochi performance supported what was seen at Mugello, where team-mate Alex Albon ultimately picked up his first podium. Red Bull was closer to Mercedes than it had ever been in normal conditions in qualifying in Italy, and was quite close to that level in Russia too.

Across those races its deficit to Mercedes was 0.526%, whereas over the preceding seven relevant races (Styria qualifying ignored because of the rain) it was a massive 1.11%.

It is therefore tempting, and fair, to draw a tentative conclusion that when Red Bull gets its set-up right, and the circuit is not too unfriendly (Monza was definitely a problem), it has been boosted of late. Potentially by car developments, or the technical directive requiring one mode across qualifying and the race stripping away a fraction more peak performance from Mercedes than Honda.

That allows Verstappen to be a thorn in Mercedes’ side when everything comes together.

“Mercedes had a faster car than us here in this weekend, so obviously we benefitted from Lewis’ penalty,” Horner admitted.

“But Max has just extracted every ounce of performance out of the car throughout the weekend.”

Why Sochi was still not good enough

The unavoidable truth from Russia is that Verstappen was only as competitive as Bottas once he had fallen out of contention. It’s little good being quicker over 15, 20, or 25 laps if those margins are small and the Mercedes has already built a 12-second lead.

Bottas said he “wasn’t concerned at any point” in the opening stint, when he was running second and Verstappen third. He was also managing his medium tyres to make sure he could run as long as possible once Hamilton stopped, and once in clean air he eased clear of Verstappen who had no response.

“When I was in clean air it really felt pretty good and the pace was strong,” said Bottas. “The same with the hard tyre. I could really feel that I could control the race.”

Verstappen admitted that his second stint was a forlorn chase. “He was already too far ahead” for Verstappen to think about catching him for the win.

These details are a stark reminder that while Red Bull may match Mercedes in specific circumstances there are still fundamental performance shortfalls in qualifying and the race.

Car and engine are both lacking compared to the Mercedes W11, which Horner has called “the most complete and rounded” car Mercedes has produced. That’s a pretty ominous claim given Mercedes has swept to six consecutive title doubles in six seasons. But it tallies given the inevitable seventh double looks set to be the most crushing.

In the grand prix, Verstappen was told he was losing six tenths to the Mercedes just on the straights. Horner said that was down to “quite a lot of clipping”, a phenomenon whereby the energy recovery system runs short of energy to deploy at the end of straights, which “skewed” the data.

There have been suggestions this was Honda playing it safe with its hybrid components after back-to-back issues for Verstappen at Monza and Mugello, but with a fresh engine and countermeasures in place there should have been no major concerns. Honda F1 technical director Toyoharu Tanabe told The Race: “It was very complicated. Many parameters were involved with that programme.

“We studied, we analysed, we applied countermeasures for each items. So far it looks like those countermeasure worked OK from this weekend’s experience. 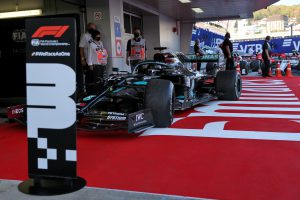 “It’s not related to the PU design. That’s why we could apply a countermeasure ancillary part without any difficulty or long-term lead time.”

Tanabe admitted Honda had “several minor” things to get on top of at Sochi but no big issues, and rumours of reduced turbocharger pressure or MGU-H deployment have been dismissed by the manufacturer.

It appears that Honda is just lacking some outright performance to Mercedes and its possible its ERS management was not on the same level at Sochi as its rival either. But in any case, the engine plays little part in Verstappen’s complaint of front-end grip through the first parts of qualifying and in the opening stint of the race.

“On the medium tyre it was just not really having a great balance,” said Verstappen. “A bit like I had in Q1 and Q2 where I just couldn’t push the entries of the corners and I couldn’t keep up with them. So, I just tried to not lose too much time.”

That is probably why Red Bull is keeping its hopes for 2021 in check, let alone the rest of this season. The Mercedes is simply a better all-round package and however much the Red Bull-Honda union has improved, it remains short of Mercedes’ level.

“There is no silver bullet,” said Horner. “We need to improve across all areas of the car.

“The whole team, together with Honda, are focused on doing that. It’s not just one area. Mercedes has done a very good job this year.

“It is probably their most complete and rounded car probably the last six or seven years for them. They’ve set the bar very high but that’s what we have to aim for.”

The combined error of Hamilton/Mercedes over the out-of-position practice starts opened the door for Verstappen to take advantage, and he did. So, Mercedes is capable of tripping up now and then, but Red Bull simply needs to be faster to put its rival under the sort of pressure that may prompt further mistakes.

Its race team and lead driver are clearly competent enough to take advantage of any window of opportunity to snipe at the all-conquering black cars. “That’s why we desperately would like to get a car to challenge them,” Horner admitted.

Sochi was just a reminder that no matter how close Verstappen makes the team look, the RB16 is still a fair way short of being the car he and Red Bull need.