The race-defining start that surprised Max Verstappen by launching him from third to first in the Emilia Romagna Grand Prix underlined how Red Bull-Honda has improved a key underlying weakness.

Verstappen started from the second row after a scruffy qualifying performance but led into the first corner at Imola thanks to a superb start in the wet, in which he passed team-mate Sergio Perez and drew alongside poleman Lewis Hamilton.

The Red Bull driver toughed it out under braking and held the inside, with the pair making light contact as Hamilton tried to go around the outside before bouncing across the kerbs in his Mercedes and picking up light front wing endplate damage. 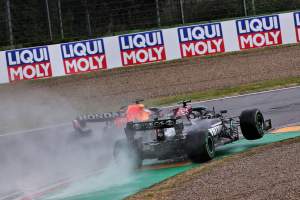 It earned Verstappen track position that, along with the Red Bull’s superior tyre warm-up, he put to good use early on. Hamilton was forced to try to recover and while he came close to taking the lead back before a slow pitstop, and closed in on Verstappen again before going off at the Tosa hairpin, Verstappen would spend the second part of the race unchallenged before winning by 22 seconds.

“I was surprised myself,” Verstappen said of the launch. “Last year we had been struggling a little bit off the line but we had worked really hard to make that better and you saw it in Bahrain.

“But now in these tricky conditions I think we did a great job.

“You always try to make the best start possible and once I saw the launch was very good of course you go for it.

“Of course, it was very important around here.”

At several tracks, a grand prix can be decided off the line. Places like Imola, Barcelona, Monaco, the Hungaroring and Singapore are obvious examples but other tracks, like Sochi and Yas Marina, are also difficult to follow and pass on. 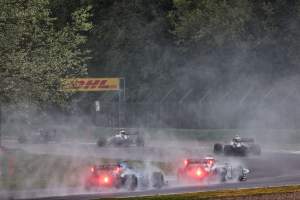 The tight battle between Red Bull and Mercedes means it is realistic to expect Verstappen and Hamilton to be trading pole positions and race wins all season, so decisive moments like the race start are more crucial than ever.

Red Bull and Honda have put significant effort into identifying the causes of their poor starts, particularly last year, and improving the launch procedure.

“It’s very complicated, the strategy and the combination between the clutch control and the power unit torque delivery, and the system – software on the team side, Honda’s side – and the PU behaviour,” Tanabe told The Race.

“It’s everything mixed. And we learned a lot from the bad starts from last year.

“We tried several settings to learn what caused that, each element’s effect on the launch. We achieved the level for this year learning from the bad launches last year, we tested, developed, and [optimised] this year’s launch.”

Two races are not enough to state definitively that Red Bull and Honda have nailed their start procedure but they do provide good evidence that the bad starts from the last couple of years have been learned from.

Asked by The Race if he felt the bad starts were now dealt with, Tanabe said: “Basically, yes but the start is a very complicated situation.

“I hope this year every single start will be successful, but it’s very hard to tell.

“Now, we are comfortable enough to wish we can have this good start every time. We’ll keep watching and then analysing – even if it was a good start.”