The full story behind the bid to ‘copy’ Mercedes

A ‘pink Mercedes’. A ‘clone’. A ‘copy’. A ‘W10B’. Racing Point’s 2020 Formula 1 car has been called many names following its reveal at the start of pre-season testing in Spain.

The RP20, to use its actual name, is all of these things and none of them. It is a car with styling cues from the title-winning team of the last six seasons, built by a team having a crack at replicating what made last year’s Mercedes so good.

You might wonder, ‘Why hasn’t someone done this before?’. Mercedes has been dominating for years. Surely it makes sense that eventually someone would just try to replicate it. If you can’t beat them, and nobody has since 2013, why not join them?

“From the outside, it probably looks like ‘oh, yeah, they’ve just copied the Mercedes’,” Racing Point technical director Andrew Green acknowledges. “It’s nothing like that.

“To copy something means nothing unless you understand what you’re doing. Otherwise, it doesn’t work.”

You have probably noticed by now that Racing Point sees no shame in what it has done. Quite the opposite. Green is proud of what his team has accomplished since deciding in the middle of last year to scrap its own concept and put its effort into seeing if it can master what Mercedes has made its own. 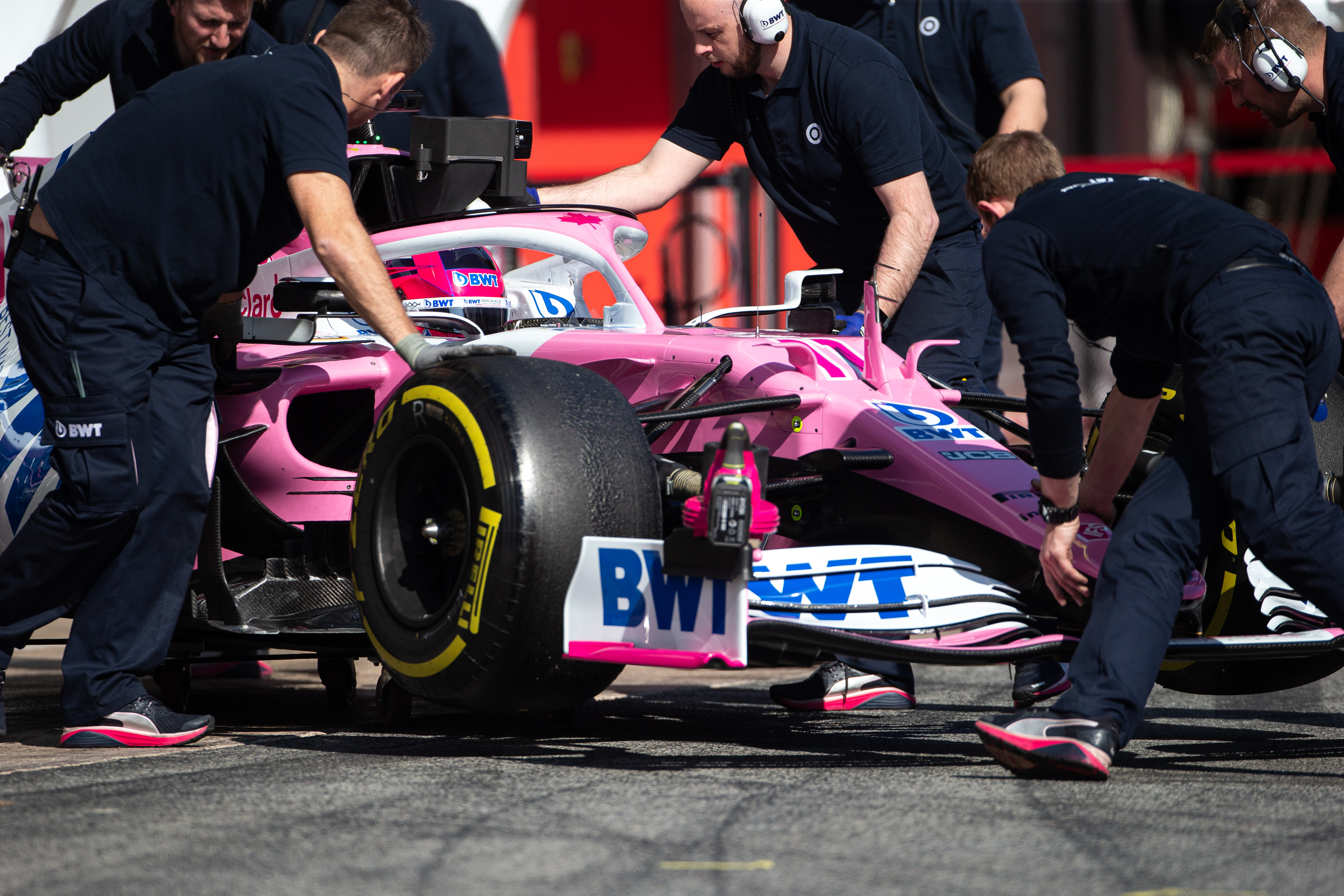 “That just wasn’t going to be acceptable. We have one more year left in these regulations, there’s time to try something new, to take a risk.”

That last point might sound odd. Copying the best car on the grid, a risk? To understand why, you need to appreciate where Racing Point has come from, as well as the complexities that go into making an F1 car work effectively.

Green accepts ‘copying’ Mercedes is something the team maybe should have done earlier. But it did not have the resources – the people or the funding – to do that.

The first factor is the practicality. Since its Force India days, this is a team that used a Mercedes gearbox. But at the same time, like many of its rivals, it has been trying to develop the Red Bull-led high rake philosophy. Green admits that they found that “a real struggle”.

Mercedes is an outlier. It has a lower-rake concept and so the rear suspension pick-up points on its gearbox are designed to reflect its own philosophy. That means Force India/Racing Point have been trying to shoehorn its underlying architecture into a different design, instead of doing what complements that architecture.

“You’d be foolish to think you’re going to try and go in a different direction ‘because I know better’,” Green says. “Try to understand what the philosophy is behind it, and then see whether you can do it better.

“Trying to fight against it is a difficult one to do.” 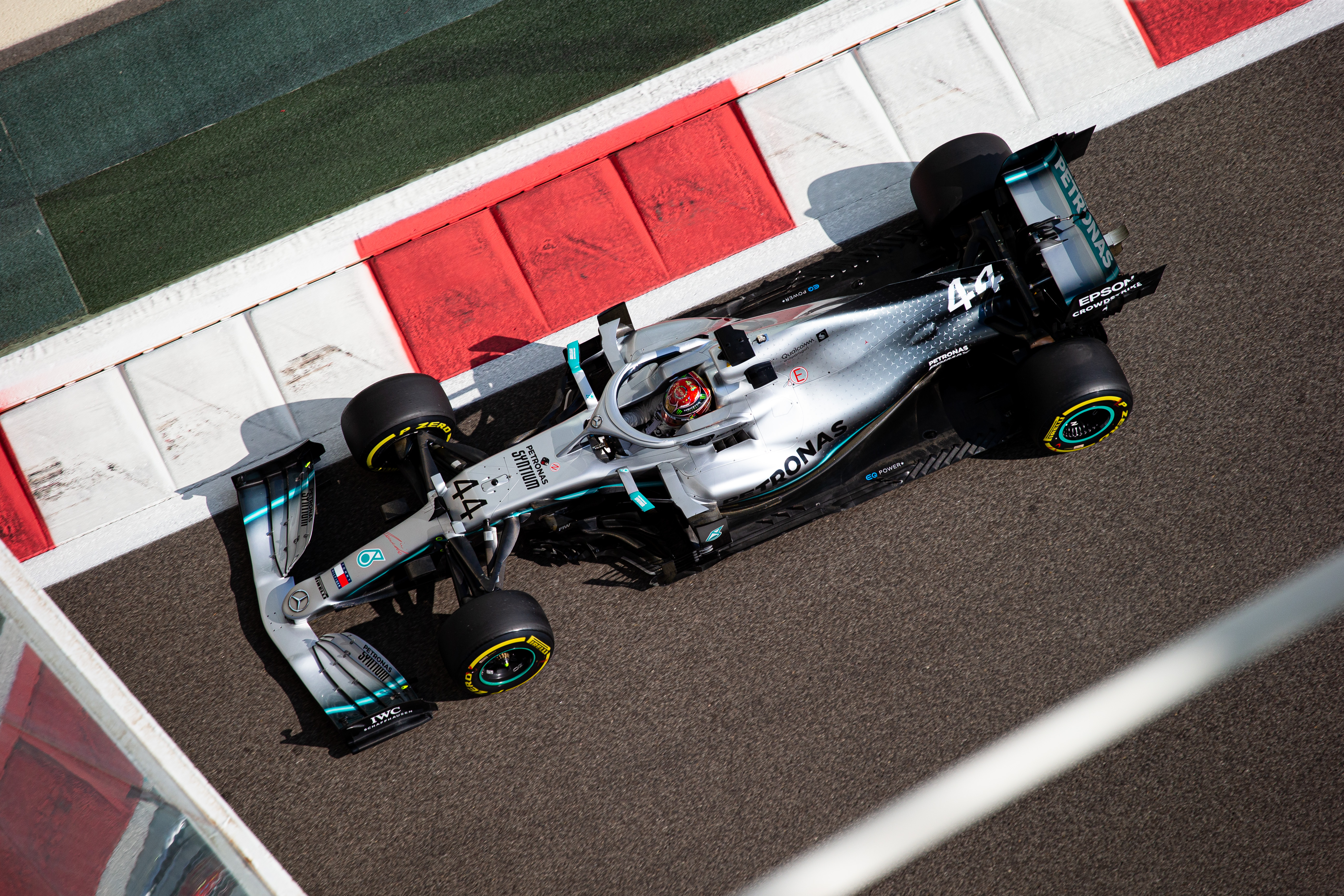 So, with a Mercedes gearbox, a Mercedes engine and some Mercedes components, the path of least resistance for Racing Point is to follow the wider Mercedes car design. At this point you might be thinking, ‘but they’ve known this is the case for a while – why are they only doing this now?’.

This is where Racing Point’s history comes in. For years, Force India operated as F1’s best bang-for-buck team. The days of underfunded independents rising up to score unlikely wins feel long gone, but Force India did the modern-day equivalent. In particular, its back-to-back fourth-place finishes in the constructors’ championships in 2016 and 2017 stand as major achievements.

But its financial situation was never prosperous and grew increasingly perilous. Green accepts ‘copying’ Mercedes is something the team maybe should have done earlier. But it did not have the resources – the people or the funding – to do that.

The complexity of designing an F1 and getting its various parts to work in harmony is mind-boggling. For example, in ditching its previous concept and changing to what Mercedes does, Racing Point “close to zero carry-over” from its 2019 car. That takes a serious investment of human and financial resources. Force India was often in short supply of both, which is why it tended to carry over its chassis to the following season.

“If we didn’t, this team would not be sitting here right now,” says Green. “We would be gone.”

He adds: “To not take the carry-over, to be able to make a brand new car from scratch, get it here and then build another one and another one, is something that we haven’t had the production capability or the financial capability to ever do that before.

“But now we have. It gave us the opportunity, so we grasped it and see what happens.” 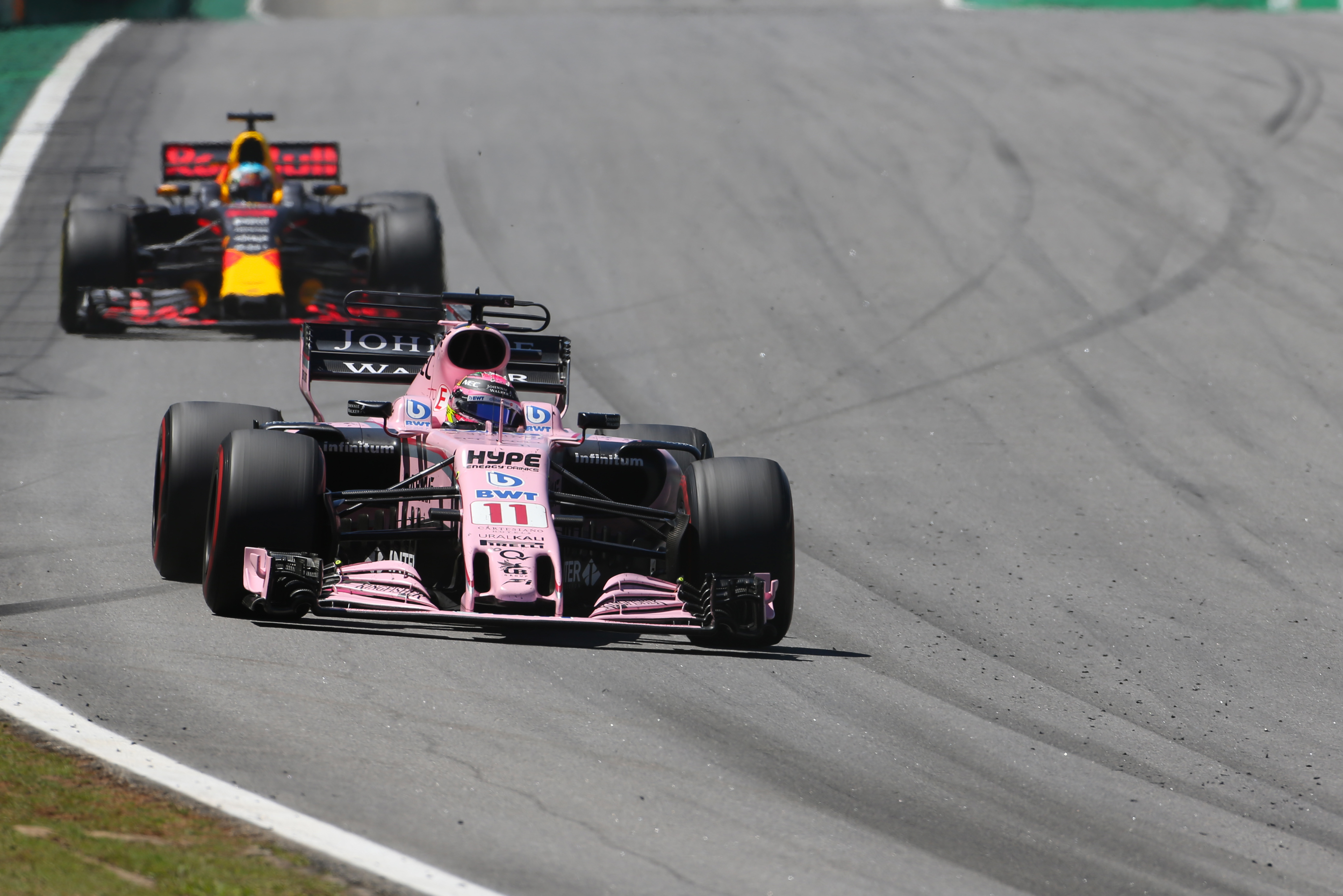 When Force India fell into administration in mid-2018 and Racing Point rose from the ashes, it was too late to enact meaningful change on the 2019 car. Which is why the RP19 was no great shakes better than the last ‘Force India’.

However, Racing Point also noticed that it was having to invest in massive upgrades for “very small returns”. It did make progress, and Sergio Perez ended 2019 on a run of point-scoring form better than anybody in the midfield, but only after a “huge, huge push”.

With a history of doing more with less, Racing Point’s technical team is one that can be trusted to think on its feet. Thus it decided to use its new-found resource to embrace the Mercedes copy.

But throwing what was learned and pursued over the last few years out the window, and trying to master a different aerodynamic approach, is more than just a financial exercise. It’s an all-new technical challenge, with not a lot of time to perfect it. And this is where it becomes a gamble.

“You build up a knowledge base from a direction you take and every team has got a different group,” says Green.

It would do a disservice to Racing Point if fans felt it had taken a massive shortcut in building a pink Mercedes.

“They’re using different tools, different software, have different people making decisions and it’s difficult once you set off on a route [to change].

“We set off on this route many years ago along with a few other people who reverted from a lower rake car to a much higher Red Bull-type car. You build up years of data and information about what’s good and what’s bad and which direction to go.

“It [changing that for 2020] is as close to a clean sheet of paper as you can get. We’re trying to develop around a different philosophy. We don’t really know where that philosophy is going to take us, we just know roughly what direction to go in.

“Then it’s for us to do the learning and understanding.” 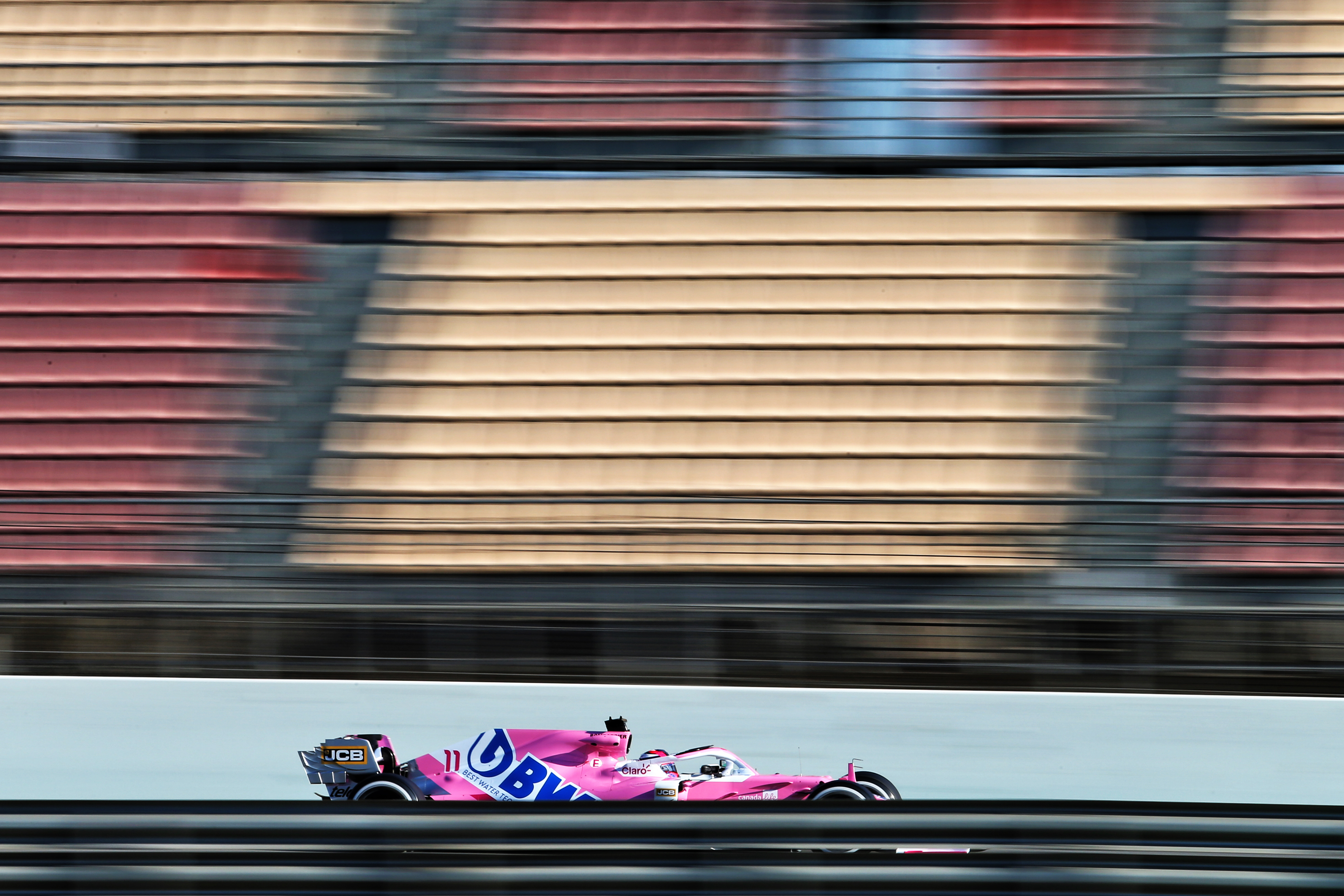 That process has started in earnest now the car has run on-track, and the early signs are encouraging because the drivers are reporting that there is a clear direction to improve. And in any case, it’s a short-term risk, because is in 2021 everything changes anyway with the sweeping technical overhaul that is coming in.

As a big proportion of intel is going to get thrown away at the end of this year, the risk of having to revert to the old concept if this change fails is not there.

It would do a disservice to Racing Point if fans felt it had taken a massive shortcut in building a pink Mercedes. There is still an awful amount of research and development to undertake, as well as actual manufacturing – the suspension systems, wishbones, chassis and aerodynamic surfaces, for example, are all Racing Point.

“I think we’ve taken a very, very big risk with what we’ve done,” insists Green. “It’s not insignificant and the amount of work that has to go into understanding another teams philosophy from the outside looking in is huge.

“I’m proud of everything. To get to where we started from six months ago to doing what we’re doing now is a tremendous effort.”

The results of the first week of testing offer the first sign of validation in what Racing Point has done. This is a team of people that has always found pride and success in being intelligent workers, not just in what they do but how they do it, and the RP20 looks another good example of that.

It is worth remembering that when the Racing Point name joined the grid, it was because the financial trouble that dogged Force India for so long finally caught up with the business. New ownership, big investment and (from 2021) Aston Martin works team status are all signs of ‘Team Silverstone’ having the financial firepower to take that efficiency to the next level.

When it is renamed Aston Martin in a year’s time, the Racing Point identity will disappear from F1 in very different circumstances to how it joined the grid.

If it comes anywhere near to mastering what Mercedes has made work so effectively, it might well depart it in a blaze of glory.