The first signs that Mercedes is solving its main weakness

Mercedes has made progress in addressing the rear instability that blighted its Formula 1 pre-season test, even though the extreme conditions of Bahrain Grand Prix opening practice make a definitive conclusion difficult.

After three days of testing at Sakhir two weeks ago, the first hour-long practice session of the season on Friday marked the most representative running we’ve had so far.

Not only were all 20 cars out on track for the first time, but given the run plans would’ve been more similar than in any one-hour window in testing, this has given us a little more to go on.

Given this is Bahrain, the track temperature in the mid-40°C bracket was higher than it will be for qualifying and the race. But at least the wind was subdued, a gentle breeze at its most vigorous and significantly less than in testing.

The Race observed Mercedes drivers Lewis Hamilton and Valtteri Bottas from various perspectives – and asked team boss Toto Wolff for his initial impressions – to analyse how the W12’s on-track behaviour has already changed.

Watching the session from trackside at Turn 11, the same corner that was a focus for The Race during testing, there was a noticeable change.

The turn-in to the medium-speed corner did appear to be improved, with the drivers seemingly a little more confident in the rear end. But on push laps, it did also become apparent that there was some mid-corner understeer. When that led to the car being under-rotated for the exit phase, it sometimes caused problems with traction on the power.

While it’s impossible to draw anything but the most limited of provisional conclusions based on the perspective of one corner in one unrepresentative session, it did appear that by weakening the front end the car was improved on turn-in, but with resulting problems later in the corner.

Given this is still the experimental phase of the weekend, it may well be this can be dialled out. But the Mercedes on track did look dynamically different compared to in testing and, on its best laps, more joined up. But that does appear to have come with a limitation on mid-corner speed.

Studying both Mercedes drivers through opening practice left a strong impression that the W12’s limitation has been flipped 180 degrees.

It is always hard to decipher how much an isolated incident is down to a car handling characteristic, a driver simply overreaching or a mistake. However, both Hamilton and Bottas visibly struggled with mid-corner understeer at different times.

A common theme through the season was that if they didn’t get the front in, understeer kicked in mid-corner and the front washed out. And into the hairpins at Turns 8 and 10 there was a slight tendency for a tiny rear breakaway that transitioned to light wheelspin on exit.

Neither driver looks any more or less comfortable than the other at this stage. Bottas had a stronger first flying lap on new rubber, then a weaker second. Hamilton was the other way round but looked tidier at the first attempt on used rubber.

Back on new tyres for the final runs, Hamilton’s best lap was compromised by some sector two traffic and he also missed the apex at the final corner – whereas Bottas got the nose in more happily.

A cautious initial conclusion could be that whatever Mercedes has tried to do to settle the rear of the car down has induced slightly too much understeer.

This kind of over-correction is not exactly uncommon. If it is the case, it gives Mercedes opportunity to find a happier middle ground – which might explain the front wing angle tweaks both drivers tried more than once during FP1.

However, FP2 will be a much more relevant test, especially when fuel loads become less of a guessing game (both drivers were using Mercedes’ main engine mode on push laps) and track conditions are far more appropriate compared to qualifying.

It’s daytime and a fairly unrepresentative session as far as temperatures are concerned, so FP2 will give us a little more idea of who has made up ground since the pre-season test. It will also closer to the track temperatures we will see in qualifying tomorrow.

My initial reaction is that the Mercedes seems to have dialled in more understeer than when it was testing. Saying that, Hamilton had a couple of reasonable oversteer moments on turn-in but nothing as vicious as we saw in testing.

Red Bull, McLaren and AlphaTauri all look well balanced and driveable, but fuel loads can influence that dramatically. We’re still really no closer to knowing what the season is going to bring us – other than that Haas is going to have a dismal start to the season at best!

WHAT DOES MERCEDES THINK?

He said that the team never found the “sweet spot” in testing but, after a lot of work between then and now, has now “found a path forward that makes the car more predictable”. 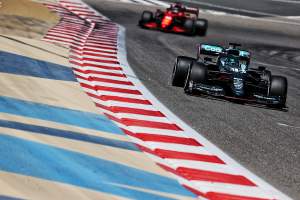 Wolff also stressed that the track conditions were “hardly representative” of the competitive sessions, “especially on Sunday with the wind”.

But the basic conclusion that Mercedes has found a way to reduce its rear stability problem for Bahrain appears to be correct after FP1.

“It’s absolutely right, what you’ve seen, the snappiness on the rear is much better,” Wolff said when The Race suggested the car now looked more stable but with understeer.

“Now it’s about tuning it for the meaningful sessions tomorrow and on Sunday, and see whether the car is still behaving nicer than in testing or not.”