The F1 lap of the season contender that flattered its car

Charles Leclerc revealed earlier in the week that he has revised his approach to an F1 weekend. His new strategy? To be flat-out the whole time!

The Ferrari driver reckons there’s more upside to be gained from running on the ragged edge by getting comfortable there than there is downside risk. It’s the sort of approach that can only work if you’re good enough to understand where the margins are – and it’s clear that even though Ferrari has provided Leclerc with a far less competitive car this year than last (for reasons that have been extensively raked over already), he is still evolving.

His qualifying lap around a tricky Algarve circuit – gripless, oily surface, tricky tyres, variable gusty cross winds – was sublime. Lewis Hamilton deserves every accolade for securing his 97th career pole, but arguably lap of the day – maybe of the season – was fourth-fastest Leclerc’s, at just over 0.4s behind.

The Ferrari has been steadily improving as the team has brought its phased series of upgrades for the last three events, but this is still a car down on both power and grip to the Mercedes. Watching the on-boards, the acceleration of the W11 out of the slow turns is visibly more savage and its grip into the braking areas at slow speeds in particular is much more secure.

Leclerc’s lap is a wonderfully-judged balancing act, maximising momentum so as not to over-stress the traction, super-ballsy where required, patient and delicate in the exits from the low-speed sections.

These are the margins he feels he can better balance upon from running to his maximum throughout the practice sessions, a spin in FP3 his only incident of note.

We've been here before…

After getting the Ferrari through to Q3 on the medium tyre – no mean feat in itself, given how reluctant the fronts were to come up to temperature – Leclerc switched to the softs for the Q3 runs.

For Mercedes and Red Bull the medium turned out to be probably a better tyre, but the Ferrari seemed much more comfortable on the soft, as it needs all the rear grip it can find at low speeds.

Into the first turn of Leclerc’s final Q3 lap, he nails the last of the two downchanges to sixth jut as the car is at the apex at 226kph before then nailing the throttle at the perfect moment to maintain the trajectory under full power and no further steering input.

It was very common here for that final downchange to come momentarily late, taking the car out wide and forcing the driver to apply more lock so as to stay away from the track limits penalty line on the exit.

“Big balls,” was his summary of that corner. But it was also perfectly judged. Through the flat kink of T2 and onto the tight T3, Leclerc concentrates on not being too greedy with the approach speed. 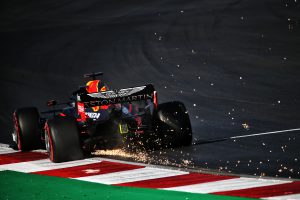 “It’s easy to get snaps [of overseer] on the exit with our car, here,” he explained, “and I wanted to avoid that.”

It’s the second-slowest point if the circuit at 87kph in third gear and so getting the power down on the exit is crucial for the uphill acceleration zone that follows and his throttle control here is audible.

From there and it’s over the flat-out crest of T4, 287kph into the downhill braking zone for the slowest corner of the track, the hairpin of Turn 5. The car is at its worst here, where low-speed mechanical grip is at a premium. The rear suspension does not work well as the load comes off it and it’s something that Leclerc has had to incorporate into his technique, in contrast to Sebastian Vettel who admits he cannot deal well with the trait.

In stark contrast to the rock solidity of the Mercedes and Red Bull here, the Ferrari almost floats into the turn-in phase and well before the apex the rear skips wide. The remarkable thing is how Leclerc, as if he’s expecting it, doesn’t lose momentum with lots of correction; rather he releases some brake pressure to keep the rotation from becoming overpowering, almost converts the waywardness into an asset. It’s a moment of brilliance.

From there he uses lots of exit width, wide over the green run-off to keep the line as wide as possible, against releasing as much traction strain as possible from that overworked rear. Flat in sixth through the Turn 6 kink and flat in seventh through Turn 7, 263kph at the apex. Turn 8 is a tricky uphill right-hander, where he’s geometrically perfect, confidently committing to a strong front end (the benefit of those softs) from braking through apex and out wide on exit again, squeezing up against the traction limits.

As he heads over the crest he knows he’s now heading into the section where the crosswinds are evil and have been causing havoc all day. He makes a toggle change on the steering to alter the diff, giving him greater stability but less responsiveness over the rest of the lap. It’s now about not overloading the front of the car and into the double right-hander of Turns 10-11, he does it in two parts, turning in early but shallow for the first part, keeping momentum for as long as possible and not putting too much load on the front, which will be slower to respond since the switch change. Then he turns more from about mid-way across the track to hit the apex.

He doesn’t need all the track exit width from T11 and can therefore turn in shallow for T12, shortening the distance without hurting the momentum. He crosses the wind at the uphill apex at 260kph in sixth, keeping it pinned.

Turn 13 is another tricky braking area into a slow left, complicated by having to cross the wind again. He prefers to miss the apex here, running the longer but faster line around a metre wide of it, not wanting the power to kick in when he’s got a lot of steering lock on, thereby giving a cleaner, faster exit.

That rear end is still challenging him, the tyres clearly getting hot now, and his hands are a blur of correction but it’s not that costly – as there’s only a short squirt from there down to T14, a long fourth-gear corner that flows into the flat-out final turn. He’s super-patient with the power through 14, just letting the speed carry him out before pouring it on progressively.

The Ferrari is getting better but this lap of genius flatters it. It’s within sniffing distance of Max Verstappen’s Red Bull just ahead and comfortably ahead of Sergio Perez’s Racing Point and Alex Albon in the second Red Bull.

It’s a similar sort of lap in a recalcitrant Ferrari that made a legend out of Gilles Villeneuve.