This article originally appeared on January 29 2021 and has been updated to reflect Red Bull’s announcement.

Red Bull’s settled deal to run Honda engine technology on a continuation basis following the Japanese manufacturer’s withdrawal at the end of the season is unusual, but not unique in Formula 1 history.

When an engine manufacturer withdraws, usually it holds onto its engine technology. Of the last three automotive manufacturers to walk away from F1, neither of Honda and BMW allowed others to use their engines, while Toyota’s initial deal to supply the planned Stefan GP team with its powerplant and chassis came to naught.

But there have been cases when manufacturer technology was used by an independent – or at least, largely independent – engine supplier and continued to race in F1.

They don’t offer the best omens for Red Bull’s chance of making ‘Not Honda’ work, but all the deals explored below happened in very different circumstances to what’s being proposed for 2022.

After BMW announced its intention to quit F1 at the end of 1986, it sold the rights and stockpile of its M12/13 engines to Arrows backer USF&G. This resulted in those inline-four engines racing in F1 for another two years badged as Megatron. This was the name of a USF&G subsidiary that had provided computing equipment.

Curiously, the Megatron continuation engines ended up competing against pukka works BMWs in 1987. 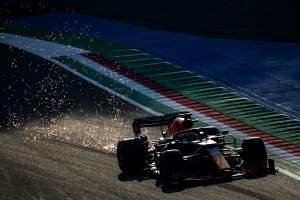 This was because BMW temporarily reversed its decision in order to see out the final year of its Brabham supply contract, continuing to use the M12/13/1 engine introduced in 1986, which inclined to 72 degrees to suit the unsuccessful lowline Brabham BT55.

But while related, that was a different engine to the ‘upright’ M12/13 powerplant Megatron had the rights to.

Tuned by Swiss-based Heini Mader, whose company had worked with BMW on its F1 engine project, Megatron units powered Arrows to a solid season in 1987 despite struggles with the mandated turbo pop-off valve. Megatron also supplied Ligier, with less success, as a late replacement with Alfa Romeo that season before the French squad switched to Judd propulsion for the following year.

In 1988, Arrows had the best season in its history with fifth in the constructors’ championship despite having to make modifications to adapt to the lower boost level permitted and the existing stock of engine parts starting to run short.

The switch to atmospheric engines in 1989 brought the Megatron programme to an end.

The lines between Mugen and Honda have always been blurred. Owned by Hirotoshi Honda, son of Honda founder Soichiro, there has been a long association between the two companies even though Mugen has never been owned by Honda itself.

And while Mugen’s F1 involvement in F1 in the 1990s started and ended as effectively a Honda factory programme, there were times when it had to be more independent.

Initially, Mugen prepared the Honda RA101E V10 engines that propelled Tyrrell in 1991. This was as part of a deal that had brought Satoru Nakajima to the team a season earlier, but with Honda focusing on its V12 project it brought in Mugen to run its secondary ‘works’ supply.

Mugen then supplied an evolution of that engine – renamed as Mugen-Honda – to Footwork in 1992-3 (pictured above) with independent funding, albeit with some Honda engineers still involved. It subsequently switched to Lotus and then Ligier, famously winning the 1996 Monaco Grand Prix with Olivier Panis.

Honda gradually ramped up its involvement and by the time it linked up with Jordan in 1998 they were Honda works engines in all but name.

“The engine for 1998 was fully designed, developed and paid for by Honda,” says Gary Anderson, Jordan technical director when it switched to Mugen-Honda power. “All my meetings were directly with the Honda engineers in Japan and Mugen were involved in the logistics and had a circuit presence, but even then that was small.”

Mugen-Honda engines ultimately claimed four victories in F1, the other three with Jordan in 1998 and ’99, before Honda’s fully fledged works return with BAR in 2000. Jordan’s engines remained Mugen-Hondas that season before it too got an official deal the following year.

When Renault announced it would pull out of F1 at the end of 1997, French engineering company Mecachrome did a deal to continue to use its engine technology and supply it to teams on a customer basis.

Mecachrome had a long history of working with Renault and was already heavily involved with the preparation of its works engines.

Mecachrome engines powered both ex-works Renault teams, Williams and Benetton, in 1998. While Williams ran its engines as Mecachromes, Benetton badged them as Playlife in deference to a fashion company owned by the Benetton family.

In May 1998, Supertec, run by Flavio Briatore, announced it had acquired the rights to distribute the engines, which continued to be prepared by Mecachrome. It continued to supply Williams and Benetton in 1999 alongside the new BAR team. For its final season in 2000, it supplied Benetton and Arrows.

While the Renault engine was market-leading in 1997, the continuation project didn’t keep pace with development despite Supertec’s lofty ambitions.

But it proved to be a solid stop-gap engine for Williams and Benetton and picked up 12 podium finishes from 1998-2000 despite never managing better than second place.

When Peugeot quit F1 at the end of 2000, the Peugeot Sport F1 facility and technology was sold to Asiatech. It had grand ambitions and a five-year business plan intended to turn it into a fully-fledged works F1 team, with running the ex-Peugeot engines seen as the perfect soft start to its in-house engine programme. It had cash, too, thanks to investment from Hideo Morita, the eldest son of Sony co-founder Akio Morita.

It supplied Arrows with its engines, now called the Asiatech AT01s, for free in 2001, although the lack of performance was criticised by team boss Tom Walkinshaw. That resulted in a switch to power Minardi in 2002 with Asiatech AT02s that were a gentle evolution of the old unit.

Again, the lack of performance was a concern even though the reliability was impressive. But Minardi owner Paul Stoddart made clear his intention to shift to an alternative supplier in 2003, holding discussions with Ferrari before striking a Cosworth deal, and Asiatech was left seeking a new partner.

In 2002, it also unveiled a windtunnel model and single-cylinder development project that was the foundation of its planned all-new engine. But despite its ambitions, it couldn’t convince a team to take its engines in 2003 and set its sights on a sabbatical to gear up for a full works entry.

But Morita withdrew his investment, having put in an estimated £200million, and the company closed down in November 2002.