McLaren Formula 1 driver Lando Norris admitted there was an element of frustration and annoyance about his Styrian Grand Prix despite the overall satisfaction of another top-five finish this season.

The Norris-McLaren combination is F1’s third-best in 2021. Norris has now finished in the top five in seven of this year’s eight races so far and at the Red Bull Ring last weekend he was fifth for the third grand prix in a row.

But the lead McLaren was also lapped for the first time this season, a hint of the reality that is keeping the team and its driver grounded in their pursuit of Red Bull and Mercedes.

Norris said he couldn’t have done any more in his race and he’s almost certainly right.

He started third, made a great pass on the outside of Sergio Perez into Turn 4 to regain the place on the opening lap, and help off the Red Bull until lap 10.

After losing fourth to Mercedes’ Valtteri Bottas a lap later and having regressed to where the car should have been without his qualifying heroics, Norris settled in for the long haul.

“It’s frustrating because we would love a bit more, we would love to be a bit higher up, and at least fighting someone, something,” he admitted afterwards.

“But in some ways, it’s a positive that we had a lonely, easy race.”

Norris has indicated that the more he occupies the best-of-the-rest position, the more it isn’t enough. He and McLaren want more.

In the Styrian GP it was not a case of taking another top-five finish for granted, more the fact it was impossible to ignore the gaps to the cars ahead. 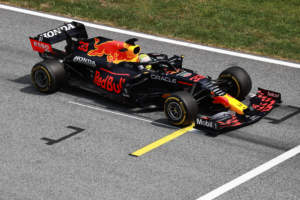 They were significant. Norris finished 26.7s behind Perez, who made an extra pitstop and finished the race right on Bottas’s tail. Lewis Hamilton probably should have been a minute or so up the road without his own late pitstop at the end.

And race winner Max Verstappen lapped Norris 15 laps from the end with the margin between them eventually more than 70 seconds.

“But I guess every time you get in that position and you get comfortable with it, you always want a little bit more, you want to achieve something more.

“It’s annoying because they were so much further ahead today. It wasn’t like they were 10 seconds ahead, or 15, or five. It was 26.7 seconds ahead. That’s a lot of laptime. That’s a much better car needed, and a lot more grip and things…

“It’s frustrating because we want to improve but I guess for a while you’re not going to see us do a lot better than that in terms of pure performance.”

Norris said he was still happy to be fifth, and of course he should be given what McLaren is fighting for at the moment, but the wider focus on the gap to Red Bull and Mercedes is the racing driver equivalent of familiarity breeding contempt. Racing drivers never like to settle. 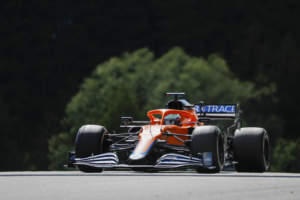 Unfortunately, the Styrian GP was a true reflection of McLaren’s reality. If the top cars all have normal races, then fifth is the best result on the table. And if it’s an uninterrupted grand prix it will probably be a distant fifth.

Getting lapped at the Red Bull Ring was something new for the lead McLaren but the hints have been there before now.

Norris has been the first McLaren home seven times this season, with Daniel Ricciardo the lead car in Spain. Several races have been interrupted by safety cars at certain points but if we look at the lead McLaren’s deficit in every race this season and judge it against the number of laps that were run interrupted to the finish, there’s a clear pattern.

We’ve explored before how McLaren’s Sunday deficit is being more ruthlessly exposed this season by the title fight, as Mercedes and Red Bull have pushed each other more in almost every race than Mercedes ever was in 2020.

So, in Spain and France, where the winner switched to an aggressive two-stop strategy and had to push like hell to overcome the other on-track, McLaren finished more than a minute behind. In Monaco, where Verstappen’s win was never really threatened, the pace at the front was more moderate.

It was slightly different in the Styrian GP as there was not quite the same fight but Red Bull and Verstappen were simply really, really, really fast even with a degree of management about their race.

Verstappen used a clear performance advantage to crushing effect until the 10 or 15 laps when it was clear Hamilton was in a more severe management mode.

In the last 15 laps, Verstappen’s pace dropped by around three tenths of a second on average – so there’s every chance that if Hamilton had been able to continue his pursuit to the finish, Verstappen would’ve gone quicker and the Norris deficit would’ve been even bigger.

“We have seen this year that both in qualifying conditions but also in the race we’ve definitely made a step forward and got closer to the guys in front,” said McLaren team boss Andreas Seidl.

“But it is also clear that the gap is still big, especially when these guys are doing a flat-out race, which didn’t happen many times last year. 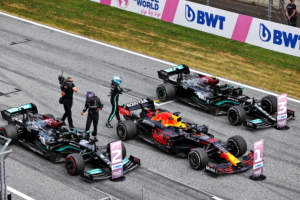 “The competition between Lewis and Max going flat out shows that’s the real pace difference we have in a race where you have no safety cars or something else.

“But I’m happy with the steps we’re making. We just need to keep making steps over the next two years and at some point we will get them.”

All Norris and McLaren can do in the meantime is ‘be there’. If something happens to any of the leading four cars they can strike – like at Imola and in Monaco, where Norris grabbed podium finishes. If nothing happens, they must try to finish fifth.

Maybe over the course of the season that will get even more frustrating. It’s simultaneously a sign of how far McLaren’s come in recent years and how far it still has yet to go.

Ultimately, for a team still on the comeback trail, a distant fifth’s a good thing to be annoyed about.