Sainz has mastered Ferrari F1 ‘basics’ but not its ‘tricks’

Carlos Sainz Jr says that he has mastered “the basics” of the 2021 Ferrari after completing 57 laps of running on the first day of the Bahrain pre-season test.

Sainz, who has replaced Sebastian Vettel at the Scuderia, had his first outing in the 2021 Ferrari SF21 and set a time of 1m31.919s which was fast enough to place him fifth overall on the timesheets by the end of running.

He had pipped Alfa Romeo’s Antonio Giovinazzi as the fastest Ferrari-powered car on track after an impressive run in the final 11 minutes of the session on the medium C3 tyre. 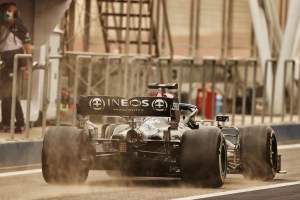 Ferrari is hoping for a complete turnaround in form this season after a torrid 2020 and set a total of 116 laps with Sainz and Charles Leclerc on Friday.

Asked if the car was giving Sainz confidence, he said: “It’s difficult to tell because I don’t think I’m actually at the limit yet. It’s too early. I mean, I only have 60 laps with this car, it’s not enough to put it absolutely on the limit.

“I think I’ve arrived to the first test as prepared as I could arrive, given the situations, and I feel like from lap one I was on top of the steering wheel, the switches, knowing what we wanted to test, we tested exactly everything I wanted to test.

“I felt on top of the basic stuff – now it’s time to challenge the car and little by little try to find its tricks, where the last two or three tenths are, which is the limit of the car. And that’s going to take some time and a lot of new sets of tyres, long runs, to know exactly where that is.

“The fact that I did my debut with Ferrari with a sandstorm and 50km/h gusts of wind, it didn’t help for sure.

“But in the end let’s see if later in the test or at some race weekends I have a bit of a calmer situation to assess more the little fine-tunings and the little things.”

Earlier in the morning, Leclerc had caused the first red flag of the test when he stopped the Ferrari at Turn 4. It was later revealed that the issue was a “combustion anomaly”, but Sainz said that this had a negligible impact on the team’s planned running.

“We went out a bit later but in the end we shortened up the timings of the stops, and I didn’t care at the end because I could do all the laps and all the things that I had planned,” said Sainz.

“We need to take into account that in testing teams are extra cautious whenever they see something on the data that’s a bit strange, they stop the car immediately just to make sure it’s not a day-ending stoppage, you know?

“And it wasn’t the case, we could go out I think one hour 15 minutes, one hour and a half after the stop. We checked everything and we went back out.”