George Russell claimed his fourth consecutive victory in the Formula 1 Virtual Grand Prix finale in Canada, leading from start to finish after starting on pole position.

The Williams driver rated his qualifying lap as his best this year, giving him pole with a margin of 0.452s over Red Bull’s Alex Albon – who would have been just over a tenth behind had his best lap not been disallowed for track limits violations.

With Albon battling lag that at one stage led him to suggest he couldn’t race, Russell held the lead comfortably at the start and quickly pulled out a gap of over a second.

Although Albon appeared to have been shuffled down to fourth behind the second Williams of Nicholas Latifi, who had started third, and Mercedes driver Esteban Gutierrez on lap three, this was misleading.

Albon was then restored to second place, spending the rest of the first stint trying to hang on to Russell, falling to just over 2.5s behind by the time both pitted at the end of lap seven. 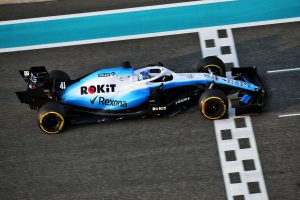 Both had started on softs and switched to mediums, as did Gutierrez – who stopped on the same lap but lost more time amid traffic after his stop.

For the rest of the race, Albon tried to keep up with Russell, who gradually edged away until the top three made their second stops to take a final set of mediums at the end of lap 22.

Although Albon started to inch up on Russell late on, he incurred time penalties that led to him being classified 15.320s behind in the final reckoning – four seconds clear of Gutierrez.

So dominant was Russell that at one stage he suggested, were Albon to pick up more penalties, that he would drop back to create a battle on-the-road to entertain the fans – a suggestion that didn’t go down well with Albon.

"Alex, George wants to slow down"

Russell had already clinched the unofficial championship thanks to Ferrari’s Charles Leclerc missing the race to contest the Virtual Le Mans 24 Hours, but took his tally to four wins in seven starts.

Albon’s runner-up finish in Canada meant he leapfrogged Leclerc for second in the unofficial standings.

“It’s been great, it’s kept us entertained, kept us busy that for sure – and it’s kept the competitive side of us busy and interested,” said Russell of his simracing activities.

“From my side, I’ve put a lot of hard work and effort in and glad we’ve got some good results to show for it.”

Renault’s Cao Collet finished fourth, over half-a-minute down and comfortably ahead of McLaren driver Ben Daly, who races as Tiametmarduk.

Daly was the only one of the leading drivers to opt for a set of softs for his third stint, leading to him charging to fifth in the closing stages ahead of Renault’s Guanyu Zhou after surviving an earlier clash at the final chicane with Mercedes driver Anthony Davidson.

Latifi finished seventh for Williams after hitting the wall and spinning during the first stint at the final corner while battling with Gutierrez, forcing an early pitstop and recovery drive to cross the line just ahead of Davidson.

Ferrari’s Callum Ilott took ninth on a one-stop strategy, with Racing Point driver David Schumacher finishing 10th from last on the grid ahead of the duo of Haas F1 reserve drivers Pietro Fittipaldi and Louis Deletraz.