Renault has lodged a protest against its Formula 1 rival Racing Point following the Styrian Grand Prix at the Red Bull Ring.

The ‘Mercedes copy’ Racing Point RP20 has been a source of controversy since making its appearance in pre-season testing, and has shown flashes of supreme pace over the first two race weekends of the delayed 2020 season – even though circumstances have prevented the team from recording a truly standout result.

Racing Point has made no secret of the fact it based its design on last year’s Mercedes, but has strenuously denied breaching the regulations in how it did so.

The two Racing Point cars of Sergio Perez and Lance Stroll finished the Styrian GP in sixth and seventh respectively, although Perez had been fighting the Red Bull of Alex Albon for fourth when he broke his front wing and had to limp home. 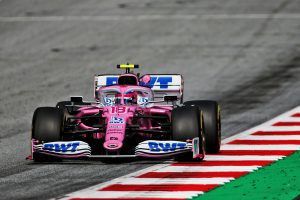 The French manufacturer’s protest alleges a breach of Articles 2.1 and 3.2 of the FIA Formula 1 Sporting Regulations, as well as Paragraphs 1, 2a) and 2b) of Appendix 6 to the same document.

Article 2.1 states that all F1 participants must comply with the International Sporting Code, the F1 technical regulations and the sporting regulations, while Article 3.2 says “competitors must ensure that their cars comply with the conditions of eligibility and safety”.

Appendix 6, meanwhile, states a team can only use such “Listed Parts” that were designed by it, and that while an outfit can outsource the design of such parts, it should not enlist a competitor for this task.

Listed Parts, as outlined by F1, include the survival cell, front impact structure, roll structures, air ducts and bodywork “with the exception of airboxes, engine exhausts and any prescribed bodywork geometries”.

A statement from Renault read: “We confirm that Renault DP World F1 Team has submitted a request to the stewards of the event for clarification on the legality of the Racing Point RP20.

“We have no further comment on this matter until the Stewards have arrived at a decision.”

Team representatives were due to report to the stewards at 7.20pm local time for a hearing.