Hamilton and Verstappen came together midway through the Monza race while battling at the Rettifilo chicane, with both retiring on the spot after Verstappen’s Red Bull bounced off a kerb and mounted Hamilton’s Mercedes.

Red Bull team principal Christian Horner said Verstappen “deserved a bit more space from Hamilton” but ultimately felt it was a racing incident “when you look at it objectively”.

Red Bull’s motorsport advisor Helmut Marko was likewise quoted as telling German TV that it was a racing incident.

But the stewards decided Verstappen was “predominantly to blame” for the collision and slapped him with at three-place grid penalty for Sochi – and Shovlin believes Red Bull’s rhetoric suggests its chiefs privately share that viewpoint.

“I mean, we obviously felt strongly that Lewis had done absolutely nothing wrong and that Max was the one predominantly to blame,” Shovlin said.

“I think if you look at the fact even Helmut and Christian weren’t trying to blame Lewis, it sort of feels like they know Max was in the wrong, because they will try and blame Lewis at any opportunity.” 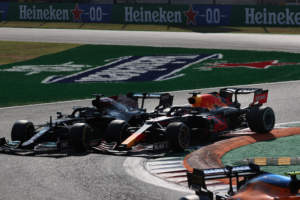 Shovlin’s remarks come a few races on from the Verstappen/Hamilton collision at Silverstone, when Mercedes felt Red Bull’s criticism of Hamilton warranted a rebuttal statement after Red Bull’s bid to have Hamilton’s initial in-race penalty reviewed fell through.

Shovlin believes that Hamilton, who had started the race from fourth on the grid and overtook McLaren’s Lando Norris on track, would’ve had a strong shot at victory if not for the collision.

“If you take the incident with Max, put it to one side, for Lewis it would’ve been a race against only Daniel [Ricciardo],” he said. “And the issue in the sprint race [when Hamilton couldn’t pass Norris] was Lando had some tow from the car ahead.

“So really it would’ve been a question of whether Lewis could’ve got by Daniel.

“You know that kind of zone that Lewis goes into when there’s a win on the table and he can see it, but it would’ve been a good little battle in the end – but it would’ve needed that pass on track to turn it into a win.”

“So you’ll always feel that three places [grid penalty] is relatively easy to overcome if you’ve got a competitive car. But that’s all in the past now, we need to make sure we put a good weekend together in Russia.”