Racing Point moves away from Mercedes design with upgrades

Two key upgrades on the Racing Point RP20 at Mugello this weekend illustrate that the team is developing its car away from the Mercedes W10 it is based upon.

New front brake ducts and a new sidepod shape are quite different to any parts that ran on last year’s Mercedes.

However, against the backdrop of the recently-resolved controversy over the original brake ducts, the new ducts did raise a few eyebrows in their obvious similarity to those on the current Mercedes W11 – although a detailed look reveals they do differ in several key areas.

“These ducts were developed by us but took inspiration from cars up and down the grid, as always.

In response to the protests and appeals over the Racing Point RP20, the FIA recently outlined to the teams a much stricter interpretation of what will henceforth constitute a team’s own design. 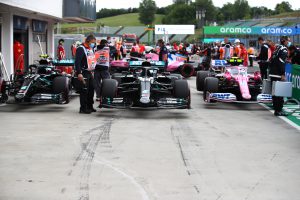 Under these guidelines it will no longer be permitted to reverse engineer another team’s car to the extent that is evident in the similarity between the W10 and RP20.

But the precedent was established during the case that any previous use of listed parts which were non-listed last year (ie which could be bought from another team) could henceforth be considered within that team’s DNA.

Taking that as a starting point, Racing Point has chosen to develop its front ducts in a very similar direction to that followed by Mercedes in conceiving this year’s W11.

The inlet ducts standing proud of the brake-enclosing drum are uncannily similar but when the drum is removed to reveal the rest of the duct, there are several key differences.

It would appear that the aerodynamic function of the ducts – how they direct the air through the wheelrim to aid the outwash around the wheel from the front wing – is significantly different.

This will work in conjunction with how the airflow is being prepared for the all-new sidepod shape debuted on the car of Lance Stroll during Friday practice.

In place of the previous Mercedes-like sharp ‘coke bottle’ in-cut of the bodywork, there is now a wider forward section with a significant downward ramp before the coke bottle section.

These ramps – which help accelerate the airflow downwards to further energise the flow following the path of the coke bottle – were an innovation introduced a couple of years ago by Red Bull and have since featured on the cars of Alfa Romeo, AlphaTauri and Williams.

“It’s a major upgrade for us,” says Green, “and will be our only one of the year. It’s quite a powerful one.

“There wasn’t enough time amid the triple-header to get the parts ready for both cars, but it will be on both at the next race.”

Next year Racing Point (which will by then be Aston Martin) is expected to adopt the radical rear suspension of this year’s Mercedes W11 as that is a non-listed part and can be purchased.

But there is no feasibility of simply reverse-engineering the whole W11 for next year. Not only would this fall foul of the new guidelines introduced by the FIA, but it would not be physically possible given that all cars must retain existing tubs for next year.

Configuring W11-copy bodywork around the W10’s tub would not be possible as the two tubs are quite different, specifically around the side impact structure/sidepod entry area.

So we can expect to see Racing Point further develop its car around the W10-like tub but incorporating the new rear suspension, which offers potentially greater aerodynamic performance by clearing a better path for the airflow around the diffuser.

That process of diverging from the original – but still with heavy Mercedes influence – really began to take shape this weekend at Mugello.