Racing Point will run its 2020 Formula 1 car on a promotional day at Silverstone next Wednesday.

Lance Stroll is expected to drive the Racing Point RP20 – dubbed the ‘Pink Mercedes’ because it is based on the 2019 Mercedes – during the run on the Silverstone National Circuit.

The national circuit is a 1.6-mile configuration, which uses the old start/finish before Copse, then loops right at Maggotts onto the Wellington Straight that leads to Brookland, Luffield and Woodcote at the end of the lap.

Racing Point is the first team to confirm that it will use its current car for a run ahead of racing resuming at the Austrian Grand Prix next month.

F1’s regulations ban running of contemporary cars outside of official tests and race weekends, but do allow for two promotional days on which no more than 100km of running can be completed using Pirelli demonstration tyres.

Mercedes became the first to get back on track this week, but used an older chassis. 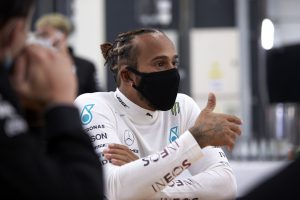 It has just completed two days of testing at Silverstone with a 2018-specification car under the regulations governing testing of what are designated ‘previous cars’ of 2016-2018 vintage.

Mercedes used that test to trial the new protocols designed to limit the risk of spreading COVID-19 such as social distancing, masks and other protective equipment.

Racing Point also plans to operate in line with the new ways of working on its Silverstone promotional day.

Ferrari is also expected to run a pre-2019 car at Fiorano before Austria, but has not confirmed its plans yet.