Podcast: Russell on the lessons from his Virtual GP success - The Race
Skip to content
Formula 1, Gaming, WEC/Le Mans

Williams Formula 1 driver George Russell joins the latest episode of The Race Esports Podcast to talk about his run to the unofficial F1 Virtual GP title.

Russell, who won four Virtual GP events in a row to emerge as the standout driver in F1’s replacement series, tells host Claire Cottingham what it took to go from a rookie to a top performer on the F1 2019 video game.

Though the series was conceived primarily for fun, Russell says drivers took it increasingly seriously as it went on, and feels there were lessons to be learned from his mini-campaign. 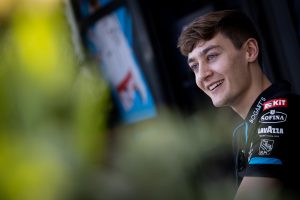 He also discusses the upcoming return to real-life track action, with the F1 season set to get underway in Austria at the start of the year.

Also in the episode, Haas F1 reserve driver Louis Deletraz chats to Cottingham and co-host Jack Nicholls about his run to the virtual Le Mans title.

Deletraz, who won the 2020 virtual Le Mans with Rebellion Williams Esports, opens up on the team’s extensive preparation for the event and his mindset during the nail-biting fuel mileage finale.

Finally, the hosts preview the second round of The Race All-Star Series’ ‘Triple Crown’ season, taking place at the Indianapolis oval this weekend.