Lando Norris fears McLaren’s eye-catching Bahrain Grand Prix practice performance was misleading as he is lacking confidence in the car, while new Formula 1 team-mate Daniel Ricciardo admitted they were both “relatively unhappy”.

Norris was second-fastest on the first day of official running in the 2021 season, and faster than both Mercedes drivers, with Ricciardo sixth-quickest.

McLaren enjoyed a quietly effective pre-season and has been tipped by many to be favourite to finish third in the constructors’ championship again.

Its strong Friday performance appeared to underline that optimism, but Norris gave a surprisingly downbeat appraisal immediately after FP2 – suggesting McLaren may have been flattered by showing more of its hand than rivals. 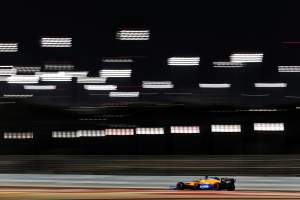 “It’s going to be kind of the usual front four cars ahead of us.

“Behind, everything’s very close, even if today were a little bit ahead it’s because we just showed a bit more.”

Norris was within a tenth of pacesetter Max Verstappen’s Red Bull in FP2 and 0.14s quicker than world champion Lewis Hamilton. Ricciardo was 0.383s off the pace.

Afterwards, Norris said he was “a bit surprised” by the result, and though he admitted it was possible the performance is real he added the new MCL35M “didn’t feel that good today”.

Norris said “most corners” needed to be improved and he claimed to be lacking the confidence he had in last year’s car.

“In different scenarios it feels good and in some other areas, it feels slightly worse,” Norris said.

“A bit of it depends on the wind and the weather and the temperature as well, low fuel and high fuel.

“It’s different areas we’ve got to work on and that’s what we’ll do tonight to try to improve.

“I don’t have the confidence that I want, especially in the medium and high-speed corners. So, corners like Turn 6, 7, I made a mistake on my first lap and I had to abort because I turned in and just completely lost the rear.

“My confidence in the car isn’t where I want it to be. Isn’t where we had it last year. But there’s also improvements in other places comparing it to last year.

“It’s not necessarily that everything has to be better. There’s just areas to work on and that’s our job.”

Norris admitted it is “a bit promising” to be dissatisfied with the car and still be so quick.

However, he suggested he was not convinced McLaren could find the gains he was after as they are “similar things we’ve been working on all season”.

“Although where we were looked good today, I don’t want to get too confident because I don’t necessarily think that is where we’re going to be tomorrow,” he reiterated.

Ricciardo, having overheard Norris’s comments, agreed in his own TV interview that “the encouraging thing is we’re second and sixth and still both relatively unhappy”.

“There’s still some things to perfect,” said the ex-Renault driver.

“Did I think I put in awesome laps today? Not yet awesome. But I don’t think today is a good kind of benchmark.

“It is nice to get everyone on track in the same conditions, though. So we do see where we stand.

“Not to be too pessimistic, but I don’t think we’re yet saying we’re 100% into the car and comfortable and it’s doing everything we want.

“I think we’ve still got some work to do. But knowing that, and we’re still at the pointy ends, I guess that’s encouraging.”