Mark Hughes: Norris and Russell showed what Hamilton is facing - The Race
Skip to content
Formula 1

Mark Hughes: Norris and Russell showed what Hamilton is facing

Watching Lando Norris talk through the lap that was just hundredths shy of Max Verstappen’s Austrian Grand Prix pole position just further underlined the feeling that his was the lap of the day.

But maybe George Russell would disagree, for the Q2 lap on mediums that put the Williams into Q3 was also a thing of beauty.

Norris was absolutely wringing the neck of the McLaren and until the final turn was marginally ahead of Verstappen. The front tyres were just a little bit too far gone to hold him as tight as needed and he lost time understeering over that final kerb. 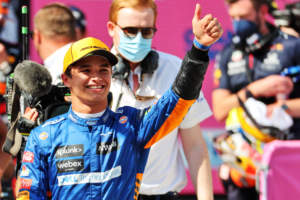 But he was stunningly acrobatic in places, never more so than through the penultimate corner, the fast Turn 9, downhill at the apex approached from a blind brow.

For the last two weekends he has been practicing using the evil sausage kerbs on the exit of the turn to limit the rear-end slide, to knock the car straight, when just an inch further or 1km/h more would have the car clattering over them, destroying the lap and the car’s floor at best. He was using that kerb to take in an entry speed that was otherwise unfeasible for that car.

In the places where the McLaren was reluctant to get quickly enough into the turn on entry, he was using the power to amplify that rotation, when using too much would have just slid the laptime away – or spun the car.

At other places, early in the lap, he was taking chunks out of Verstappen by how well he was getting the nose of the car right on top of the kerb’s apex, giving him way more track width in which to carry the speed.

That’s very much a function of how the McLaren’s aero has developed around an increasingly loaded-up front end that works brilliantly well with how Norris prefers to get the car turned with the minimum of steering lock and lots of beautifully-judged weight transfer with the brakes, the very area where Daniel Ricciardo is struggling to match him.

Ultimately Norris fell shy of pole by less than half-a-tenth of a second in a car which surely trails the Red Bull-Honda by more than that. It was a quite brilliant performance.

Russell reckons his own second Q2 lap – which got the Williams through to Q3 on the medium tyres – was as close to perfection as he can remember getting.

In these short-duration turns he was another to get quick rotation early and neatly. Watching how early he was able to get the lock off gave a good visual indication of just how effectively he was getting the Williams to respond. 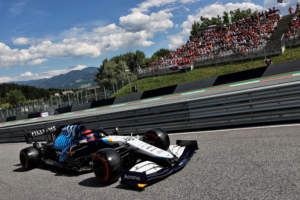 “The lap is so short that if you make the slightest mistake you cannot make it back,” he explained. “So it’s just about getting it as clean and perfect as you can.”

While absolutely on the ragged edge.

These are two of the shining stars of the future. If Lewis Hamilton is relishing the challenge of taking on the new generation, just watching this pair of laps will leave him under no illusions that challenge is going to be intense if these two get themselves into comparable machinery to his. It is going to be about more than just Verstappen and Charles Leclerc.