Lando Norris has agreed a “multi-year” extension with the McLaren Formula 1 team that will partner him with Daniel Ricciardo “beyond 2022”.

Norris has been a McLaren protege since 2017 and made his F1 debut with McLaren in 2019.

Now the good news is out there, let’s hear from the man himself shall we?

He has had an excellent start to the 2021 season, scoring a podium at Imola and playing a pivotal role in the team holding third place in the constructors’ championship. 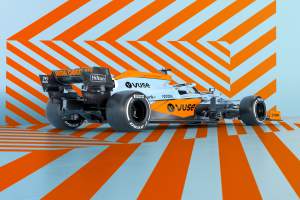 It has cemented Norris as one of F1’s brightest talents, especially as he has so far eclipsed McLaren’s new signing Ricciardo, who joined from Renault.

The length of Ricciardo’s McLaren deal was not disclosed but the Australian revealed it was a three-year arrangement.

McLaren has now revealed a new agreement with Norris that extends his relationship into the long-term as well.

The team said in a statement that the “confirmation of its driver pairing beyond 2022 signals McLaren Racing’s commitment to stability for the future and represents a further step in the team’s long-term plan to compete at the front of the field”.

Norris said his goal is to “win races and become world champion” with McLaren and as he has been part of the team for so long he “couldn’t imagine starting the next phase of my career anywhere else”.

McLaren Racing CEO Zak Brown said: “I’m delighted with the extension of our agreement with Lando for 2022 and beyond.

“He’s been instrumental in our return of form here at McLaren and we’re proud of the growth he’s shown since he first started with us back in 2017.

“Lando is one of the brightest talents on the Formula 1 grid and we look forward to seeing him continue to go from strength-to-strength both on and off track.”

“Lando has impressed us since his rookie year with his performances, and his evolution as a driver since then has been clear to see,” said Seidl.

“He’s an integral part of our performance recovery plan and his record so far, securing two podiums with the team over the past year, has shown he’s a formidable competitor on track.

“Like him, we have strong ambitions for our future together and I’m pleased we’re continuing this journey for both Lando and the team.

“In Lando and Daniel we have a hugely talented and exciting driver line-up, and this announcement is a strong signal of commitment to the next chapter for McLaren from 2022 onwards.”