'No serious damage' to Leclerc gearbox, final call on Sunday - The Race
Skip to content
Formula 1

‘No serious damage’ to Leclerc gearbox, final call on Sunday

Charles Leclerc’s chances of starting the Monaco Grand Prix from pole position have been boosted after Ferrari’s initial analysis of his gearbox showed “no serious damage”.

Leclerc set the fastest time in the final part of Q3 then suffered a late crash that brought out a red flag and prevented Red Bull’s Max Verstappen or Mercedes driver Valtteri Bottas from improving. 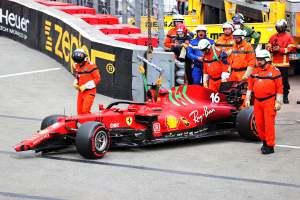 The local driver said after qualifying he was worried about the damage his crash caused.

If it necessitated a gearbox change it would prompt a five-place drop, while a new chassis would mean a pitlane start.

But Ferrari says its early investigation on the gearbox of Leclerc’s crashed car showed no serious damage.

Ferrari is refraining from committing to using the gearbox in the grand prix just yet, as further checks will be carried out on Sunday morning.

Team principal Mattia Binotto made clear earlier in the afternoon that Ferrari would not be willing to “gamble” on going into the race carrying damage that could cause a failure.

“We won’t gamble. For us, what’s important after such a quali is to maximise the number of points for the championship and finish the race,” he said.

“So reliability is key. Reliability remains the priority.

“If we have any doubt we will certainly need to change or fix it.”

28 mins ago Uncategorized No Comments