Alfa Romeo Formula 1 driver Zhou Guanyu’s double penalty in the Saudi Arabian Grand Prix was the result of a ‘miscommunication’ that led to the front-jack operator lifting the car at a pitstop when it was not permitted.

Early in the race, 2022 rookie Zhou was hit with a five-second penalty for gaining an advantage by cutting across the runoff at Turn 1 just after passing Williams driver Alex Albon on lap five.

Zhou had just used the DRS to pull past Albon, but had a brief lock-up and went off despite being clear of Albon into the left-right combination. He rejoined the track still ahead in 15th place, but after asking the Alfa Romeo pitwall if he needed to give up the position he was told it was unnecessary.

The second penalty, a more costly drive-through, was earned when Zhou attempted to serve the original punishment. 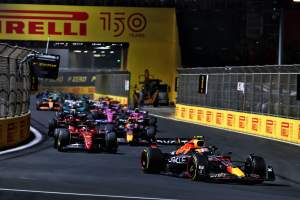 This came at his pitstop at the end of lap 16, which was under the safety car thanks to Nicholas Latifi crashing his Williams.

This was significant because it meant Alfa Romeo completed a ‘double stack’ pitstop with team-mate Valtteri Bottas coming in on the same lap.

For such a pitstop, Alfa Romeo uses two different jack operators with the one on standby for the first stop in case of a problem taking over as the prime jack for the second stop.

However, the jack operator for Zhou’s stop had not been informed Zhou was serving a five-second penalty. This happens before the stop, with the team not permitted to touch the car. 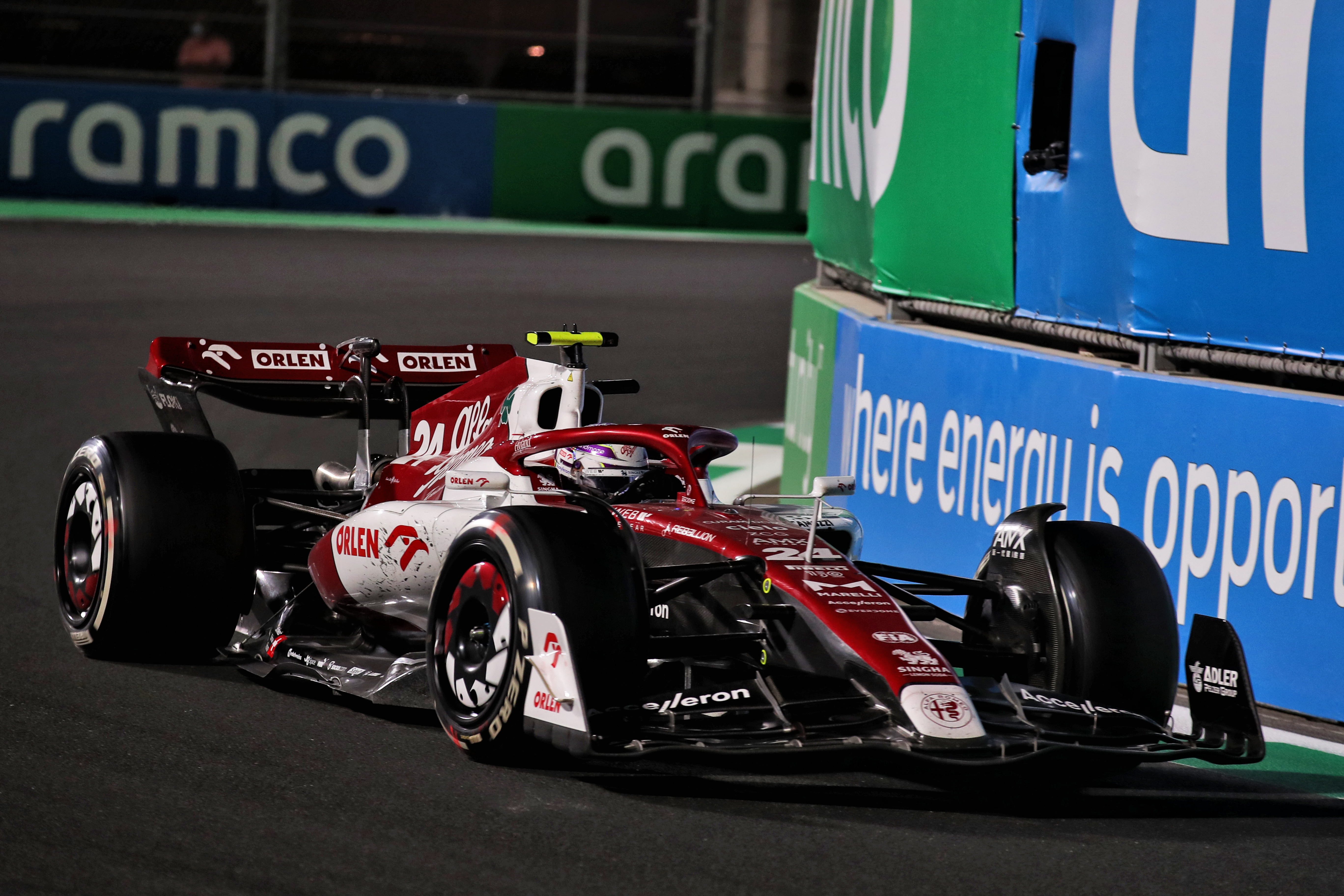 As a result, the jack operator lifted the car, then dropped it when he realised a penalty was being served. This was at the point when the crew was just about to change the tyres. He then attempted to re-lift the car, but wasn’t able to, with the standby jack taking over.

“We did a double pitstop and we had a radio communication problem there,” said Alfa Romeo head of trackside engineering Xevi Pujolar. 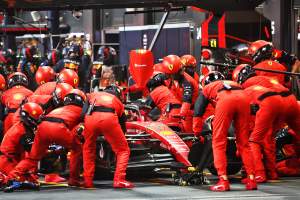 “That’s why the guy touched the car because we do it with two jacks. The main jack went on the first one and the second one with the radio communication problem.

“The front jack was not aware that it was a five second penalty. That’s why he touched the car.”

Zhou actually lost further time thanks to the confusion, spending around six seconds longer in the pitlane than he would for a normal pitstop with a five-second penalty.

But the infraction automatically triggers a drive-through penalty, which Zhou served 11 laps later.

That relegated Zhou to the back of the field and he eventually finished 11th. But even before the pitstop he had already had a difficult race, suffering wheelspin at the start thanks to Alfa Romeo’s clutch vibration struggles at the start. 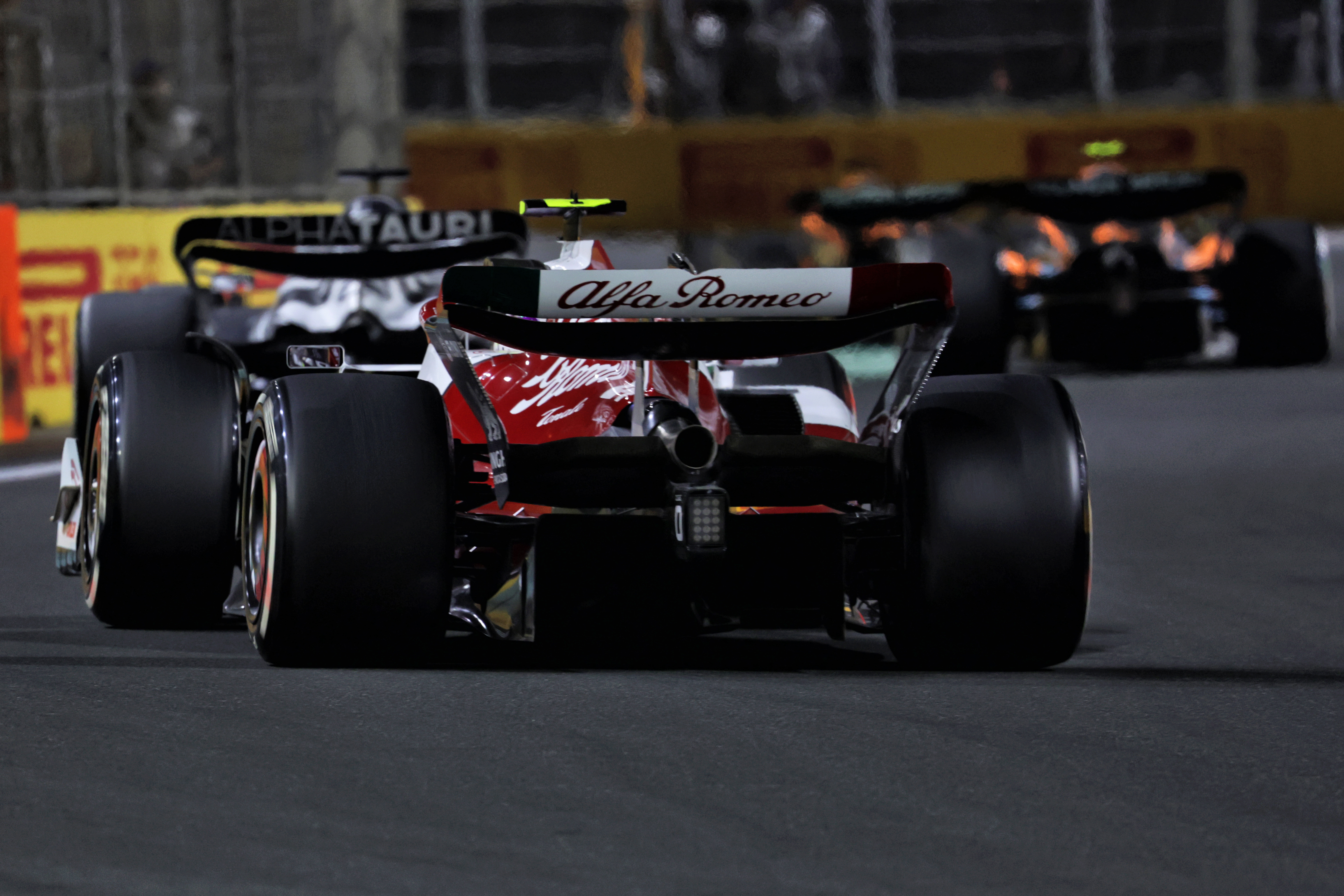 This meant he went into the first corner squeezed on the inside and alongside Daniel Ricciardo. He rattled over the inside kerb and made light contact with the McLaren, in doing so shifting up from second to third gear.

This led to the anti-stall kicking in, meaning he dropped to the back of the pack. A similar situation arose in Bahrain, where he also dropped to last thanks to the car going into anti-stall in third gear in Turn 1/2, albeit not after contact with another car.

“For the anti-stall, it is something that we need to go through with Zhou,” said Pujolar.

“There’s nothing wrong with the car thing, he has got the feeling that the revs are still OK but it’s actually not OK because it’s too low.

“We need to see what can we do to mitigate that issue in the future because now it [happened] twice.”

Given Zhou felt the revs were indeed high enough, Pujolar suggested that the rookie simply needs more time to build a feeling for the engine revs.

“It’s just maybe his feel with this kind of situation, to hear the engine revs and when it’s stalling,” said Pujolar when asked by The Race what the potential fixes are. 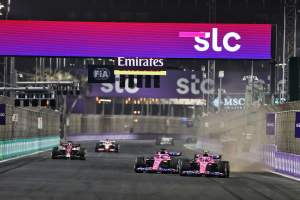 “We have to analyse a bit better, in more detail with more time. When he’s touching the car at some point maybe then it’s dropping too low and he didn’t realise.

“Everything is working as expected but for him, it’s just something that he needs to understand, but there are different ways to solve that problem and we’ll have a look at what’s the best way to do it for Melbourne .”

Zhou is hoping that a fix can be found to ensure that there isn’t a repeat of the problem in the Australian Grand Prix given he’s dropped to last place in the early moments of the race in both of his first two F1 starts.

“It’s not ideal because we had the same issues as Bahrain, so we need to investigate,” said Zhoul.

“To keep having the same issue lap one going to last is not ideal.”