Mercedes responds to claim it may block Albon Williams move

Mercedes Formula 1 boss Toto Wolff has responded to claims from Red Bull’s Christian Horner that the German manufacturer is trying to block Alex Albon from landing a drive with Williams next year.

Horner revealed on Friday at the Dutch Grand Prix that Red Bull is “working hard” to find its reserve driver Albon a race seat for next year, adding that Williams and Alfa Romeo have expressed interest. 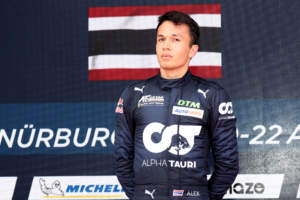 However he said Albon’s hopes of landing a seat at Mercedes-powered Williams, which would be the driver’s preference, could face “hurdles”, and he even suggested Mercedes had called Albon telling him not to go there.

Speaking later on, Wolff wasn’t asked directly about the “four phone calls” Horner mentioned, but he suggested any involvement over a Williams seat from Mercedes was linked to it looking out for the interests of its new Formula E champion Nyck de Vries.

“I think it’s the ordinary course of business,” Wolff said. “Williams has a Mercedes engine, that is clear, and we have Nyck de Vries, a Dutch driver that deserves to be in Formula 1 equally.

“I guess this is two interest groups that just have to find a solution.

“With Nyck I am in two minds. He won us the Formula E world championship most recently. The great thing is that he has two options.

“He has the guaranteed seat in Formula E, which is a really tough championship, and on the other side the maybe 50/50 chance to be in a Formula 1 car.” 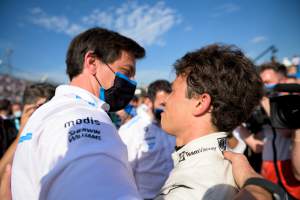 If de Vries was to stay in Formula E he’d have one more year with the factory Mercedes team before it pulls out of the all-electric championship at the end of next season.

Like ex-Formula 2 rival Albon, the Dutchman’s hopes of a 2022 F1 drive rest with Williams and Alfa Romeo.

When asked if he would block another driver from getting a seat, Wolff said: “I would never block someone like Alex Albon.

“He’s a fantastic guy, personality is great, I was personally sad to see him going.

“And if he has a chance driving in a Formula 1 car, I think that’s the right thing to do.

“But equally maybe Nyck has, so we need to look at the open spaces at Alfa and at Williams and try to find a solution.”