Bahrain Formula 1 testing kept its best surprises back for the final day.

Once yesterday’s running had been filtered with corrections for estimated weight and tyre differences it looked quite conventional.

On the quicker final day, it didn’t look like that at all.

Some teams found as much as 1.5s of single lap pace but Mercedes virtually flatlined as its drivers struggled with a rear end stability problem that it simply doesn’t understand yet. 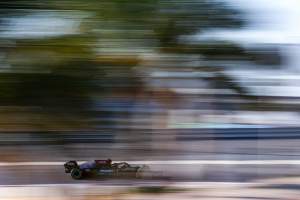 Mercedes not as quick as Red Bull, confused by low-fuel work
Read more

After that had all played out, we were left with a picture that definitely seems to paint the Red Bull-Honda as the quickest car – by a handy margin from the sister AlphaTauri team.

Trying to call form definitively from these three days of Bahrain testing is by some order of magnitude more difficult than the usual Barcelona tests.

The variation in the track grip afternoon to dusk is in excess of 1.5s according to the best team estimates and this completely changes the picture of the performance gaps between the different tyre compounds.

Then there is the wind, which varies wildly in both strength and direction, and the fact that the Sakhir track is a whole lot more power sensitive than Barcelona so variations in power modes chosen by the teams will have a larger effect on lap times.

Finally, the squashed three-day duration meant a wild variation in run plans as teams prioritised different aspects and there was very little correlation therefore between teams. There simply weren’t enough long runs to do a meaningful comparison.

So we are left with the single lap pace of the cars let loose in the final 90 minutes when the track cooled and from that we can apply the same filters as yesterday.

The difference between tyre compounds was not predicable but reckoned to be in the range of 0.2-0.4s. We have allowed for a step of 0.3s between C3 to C4 to C5.

Regarding fuel load weight, we have made the same assumptions as yesterday regarding the teams, based on historical data – ie with Mercedes heaviest and the others lighter by varying degrees.

Where would Aston Martin fit in had it been running when the track was quick? Yesterday, using the same assumptions it would have recorded a 1m28.7s, but everyone improved today, some more than others, but between the nine teams by an average of 1.1s.

Apply that and maybe the Aston Martin could have done a 1m27.6s – which would have just shaved it into second ahead of the AlphaTauri.

But that’s a generous assumption because the spread of improvements between teams was wide (see below). If Aston Martin had made only the same improvement as Mercedes it would be trailing in sixth, between McLaren and Alpine.

This table shows how teams’ thereotical best laps improved from Saturday to Sunday:

Might Honda have unleashed a step more available power to Red Bull and AlphaTauri on the final day after establishing reliability on the first two days? It’s as good a working theory as any for the dramatic step up in performance of both those teams today.

That said, it wasn’t only the progress made at those teams: Mercedes by its own admission was struggling with a stability problem which seemed wind-related but more underlying than just that.

Ferrari made a similar step in performance to the Honda-powered teams from Saturday to Sunday, enough to put it on a par with Mercedes but still around 1s adrift of Red Bull.

Aston Martin suffered more reliability niggles, with a turbo problem curtailing Sebastian Vettel’s running in the afternoon session when the track was at its quickest. Lance Stroll had managed some race stint simulations in the morning but there were no representative fast single laps from Aston today.

Most teams opted not to do race simulations runs, reasoning that with time so restricted there was more to be found out be doing a bigger number of shorter runs.

The exceptions were Ferrari and AlphaTauri. The race sims of Carlos Sainz Jr and Yuki Tsunoda were conducted at much the same time and on the same medium/hard/hard combination – the Ferrari ‘won’ that race by just over 10s. On single lap pace though, the AlphaTauri of the Japanese rookie appeared to have around 0.3s advantage over Sainz.

It’s not only us who are struggling to decipher exactly what the competitive order might be with the first race just two weeks away. The aforementioned randomising factors could saw lap times by up to 2s.

What is sure is that Mercedes has a major concern and a lot of data to analyse before it arrives at an understanding let alone effects a fix.

Can it do that in the available time?