McLaren has revealed the MCL35M, its 2021 Formula 1 car that marks its first Mercedes-powered design since 2014.

The British team has reunited with Mercedes after six years split evenly between its dreadful Honda alliance and its renaissance with Renault.

Ricciardo and Norris will get their first experience of the car on Tuesday at Silverstone, where McLaren will utilise one of its filming days.

McLaren’s papaya orange and blue livery remains, with a “subtle progression” for the 2021 design.

Time for a closer look at the #MCL35M. pic.twitter.com/0n1qy7qFWG

The Mercedes engine has been called “one of several key changes” to the car from its predecessor, the MCL35.

Though described as an “evolution” of the 2020 car – hence the similar model name, updated with Mercedes recognition – the new design is akin to an all-new car despite large-scale mechanical carryover from 2020 to 2021.

McLaren technical director James Key says installing the new engine has taken a “considerable effort” but “despite our limited scope for installation in a homologated car, the team has done a fantastic job of optimising our design work”.

“Despite relatively stable technical regulations from 2020, there are several significant aerodynamic changes to the rules that are important to get right,” says Key.

“Every change to these regulations presents an opportunity, and the team in Woking has been working incredibly hard in difficult conditions to maximise those opportunities.”

The MCL35M will be tasked with trimming the gap to Mercedes and Red Bull this season. 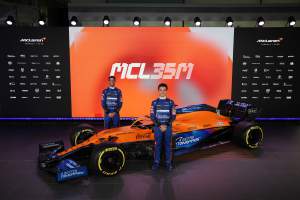 McLaren finished third in the constructors’ championship last year, its best result in F1 since 2012.

“We’re thrilled to launch our 2021 team with Lando and Daniel, as we prepare to get the Formula 1 season started,” said McLaren CEO Zak Brown.

“We’ve got an incredibly exciting driver line-up this year, both are formidable racers on-track and great characters off-track.

“Lando is a naturally fast and intelligent racer on an exciting trajectory, while Daniel is a multiple grand prix winner with a sharp racer’s edge and exceptional talent. 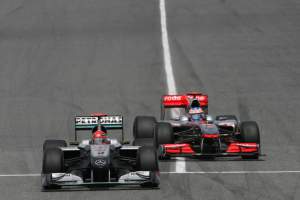 “After a challenging but rewarding 2020, we have firmly hit the reset button for this season as we continue on our path towards the front of the grid.

“This will be an even tougher season but we’re ready to meet the challenge.”

The unveiling of the MCL35M is the first launch of the 2021 F1 season and the first look at how teams have adapted to subtle but significant aerodynamic changes mainly at the rear of the car.

AlphaTauri is scheduled to be the next team to unveil its 2021 challenger, on Friday February 19.