McLaren team principal Andreas Seidl says Renault’s protest against Racing Point is a “key” opportunity to clarify whether allowing such a “copying job” is the right direction for Formula 1’s future.

Seidl was keen to distance himself from the specifics of the protest and stressed he would be surprised if Racing Point had done anything explicitly illegal.

But what he said “in general” on the topic indicates he wants to see clarifications that curb the capacity to copy a rival car so closely as part of a wider co-operation with another team.

He sees the outcome of this protest as key to deciding whether or not F1 becomes a “copy championship” and stressed his support of the concept that teams should all be independent constructors.

Beyond the question of whether the Racing Point is legal under the current rules, Seidl said this protest also offered an opportunity to further restrict the alliances that exist between teams.

“Regarding the protest, we don’t know as a team all the details that are behind it, and to be honest with how outspoken and proud Racing Point have always been about their copying job, running a one-year-old Mercedes, I would be surprised if there has anything been done which is not according to what is possible within exploring the limits of the regulations,” said Seidl.

“At the same time, we welcome any clarifications on this topic because it’s an important topic for us as McLaren.

“This protest is another key element of making some clarifications on the FIA and Formula 1 side of what they want Formula 1 to be in the future.

“Do they want that Formula 1 ends up a copy championship where you end up with two, three constructors or manufacturers and they simply have more cars of one manufacturer or constructor on track – which I think is the wrong way to go for Formula 1 and is not a sustainable way for us.

“What made Formula 1 so special is that Formula 1 always has been a competition between 10 constructors.

“The final car is the result of the know-how, the engineering power you have built up within your own team over the years and in the end that’s a competition you all want to be in and I think also fans want to see.

“We have everything in place in order to push that back even further again to what Formula 1 always has been.”

Seidl also said clarifications on this are necessary to help dictate the future of the McLaren team and its approach to re-emerging as a winning force.

He also said components such as the suspension, which are currently not among the listed parts required to allow a team to be considered a constructor, are among the performance-defining components he believes teams should design themselves.

“The key performance differentiators you have in Formula 1, which is aerodynamics for sure but also bits like the structural design of the car [and] suspension elements should be done by each team individually,” said Seidl. 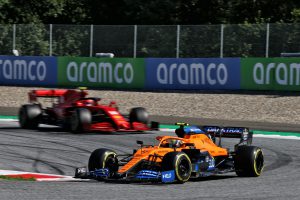 Why McLaren really could beat Ferrari in 2020
Read more

“A suspension part is the result of experience you’ve built up within a team over many, many years, the experience you put in from a lot of engineers being involved, not just on the design side but also on the engineering side, on the simulation side, on simulator work, on bringing back results you collect on track back into the engineering back home.

“So you cannot just take this part of the drawing in an isolated way. Each part of a Formula 1 car is part of the entire car concept and it’s something Formula 1 simply has to decide which way they want to go together with the FIA. I think our position is clear what we want to see.

“It’s important to get these clarifications now in order to also make up our mind of our future as a team. But we clearly want to be our independent team with our identity.”

Seidl stressed that the regulations in this area need to be clarified, suggesting that the policing of them might require the embedding of a permanent steward within team factories to ensure there is no illegal transfer of information.

He also referenced the recently-created FIA ethics and compliance hotline, which allows the anonymous reporting of rules breaches, as a key part of this process given the complexity added to the rules by the regulations allowing partnerships between teams.

He warned of the damage done to F1 by protests that are necessary to ensure teams are following an extremely complex set of rules given the risk that they are “all competing according to the same regulations”.

“It’s particularly important now also that we, as teams, give maximum support to FIA to see how can we even improve this policy, because we all have no interest in what’s ongoing at the moment with this negativity of protests and so on,” said Seidl.

“We fully support initiatives like the whistleblowing concept of FIA which I think is something that should be broadcast and encouraged even more, because I think that is one key element to make sure we all compete under the same regulations.

“We will also be open to discuss even further initiatives like supporting the FIA to increase their capacities in order to police what’s going on at teams, and also what’s going on in terms of cooperation between teams.

“You could also think about ideas like putting permanent stewards at the team bases and so on, embedded in the teams, simply to make sure that we have a fair sport.

“The way the regulations are at the moment, the way it is also allowed to work together or to have these co-operations between teams, it’s already complex enough to police what’s going on at each team, but as soon as you open the doors for these co-operations, it’s even more complex.”