Nikita Mazepin is set to be given a new Haas chassis after Formula 1’s summer break to replace the one he recently described as “very heavy” compared to that of team-mate Mick Schumacher.

Mazepin said after the Styrian GP that he found it difficult to stay ahead of Schumacher in the race because of a weight disadvantage.

He also indicated he expected his new chassis “in the next six or seven races”, but the team has suggested it will be ready for the Belgian GP at the end of August.

“When you have a lot of laps, long straights and you have a very heavy car compared to the other car in our team, it’s very difficult to stay ahead,” said Mazepin.

“So I’m not happy. But I’m just waiting for a new one to really have a chance because at the moment I’m just a sitting duck.” 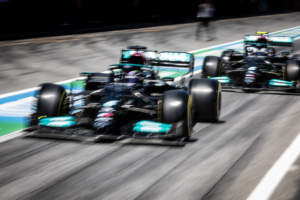 Haas team principal Guenther Steiner confirmed Mazepin’s car is heavier, but would not confirm the exact weight difference between it and the one used by Schumacher.

An extra 10kg can cost 0.3-0.4s per lap in Formula 1, depending on the circuit configuration, but Steiner said the difference was lower than this.

But he did say that the weight difference “slows him down, but it’s not by a lot”.

“I don’t want to go into the specific weight difference, it’s not very [big],” said Steiner when asked by The Race to explain the situation.

“Heavy is never good, but it’s not like 20kg heavy or not 10kg heavy, it is nothing like this.

“The chassis plan is to have it not in six or seven races, the chassis is planned to be with us after the summer break.”

F1 cars have a regulated weight distribution window, which is defined in article 4.2 of the technical regulations.

Haas is using the same monocoques as last year, meaning that with use Mazepin’s chassis has likely gained weight through the wear and tear and resulting repairs – as well as being heavier to start with.

“On the chassis there is always a tolerance, and the chassis are a year old – they raced for a year,” said Steiner when asked by The Race why it was heavier.

“Normally, you make a new one every year and the chassis is never going to get lighter.

“So I think there’s a little bit of that and also the tolerance. It’s just a little bit higher, but not a lot.”

Steiner also suggested that Mazepin’s primary problem in the Styrian Grand Prix, in which he finished 18th and 42 seconds behind team-mate Schumacher, was not the weight.

He instead pointed to Mazepin’s struggles limiting losses when being lapped, which has been a recurring pattern this season in terms of the time loss to Schumacher during races.

“Last race, it wasn’t that [the weight that made Mazepin vulnerable],” said Steiner.

“He got caught by the lapping cars and that makes you a sitting duck because once once you let three cars go by, your tyres go where you don’t want them to be and you never get it back.

“I don’t think that has anything to do with the chassis. That happened because in the beginning we decided to get him an earlier pitstop to keep him out of the blue flags.”

Asked by The Race if Steiner’s comments meant the weight was more of a marginal problem that added up across a race distance than a clear lap time deficit, Mazepin replied: “Well I think the common perspective that you get on a pitwall is probably very different to what you feel driving the car for 73 laps!

“Everyone is entitled to think, and they could be right. But I’m pretty certain that it does have quite a big impact because it offsets the weight distribution and then that offsets the set-up that you put in the car.

“So there are quite a few factors if you go into it from a mechanical perspective.

“However, I would say in the grand scheme of things it’s not unacceptable. It’s just making my life a bit more challenging.

“But I have a very good team of engineers who are helping me in my rookie year to understand and get it to work a bit better.”