Mark Hughes: Why Mercedes tumbled back again in Miami - The Race
Skip to content
Formula 1

Mark Hughes: Why Mercedes tumbled back again in Miami

After promising so much on Friday, Mercedes qualified in Miami much as it has in the previous four Formula 1 races, with Lewis Hamilton and George Russell a respective sixth and 12th and the car almost 1s off pole.

It looked a far cry from the machine which Russell took to the fastest time in FP2 and which set a long run pace highly competitive with Ferrari and Red Bull.

Watching it on track or onboard it was very obviously behaving in an entirely different way, porpoising through the turns and with a lack of rear stability.

“Today it felt like a totally different beast,” confirmed Russell. “It was the first time I’ve ever felt it all the way through a corner.

“Through Turn 4 and Turn 5 it was just bouncing through it all, and then into all of the braking zones.

“I was slower today than what I went yesterday – and everyone else has gone a second quicker.” 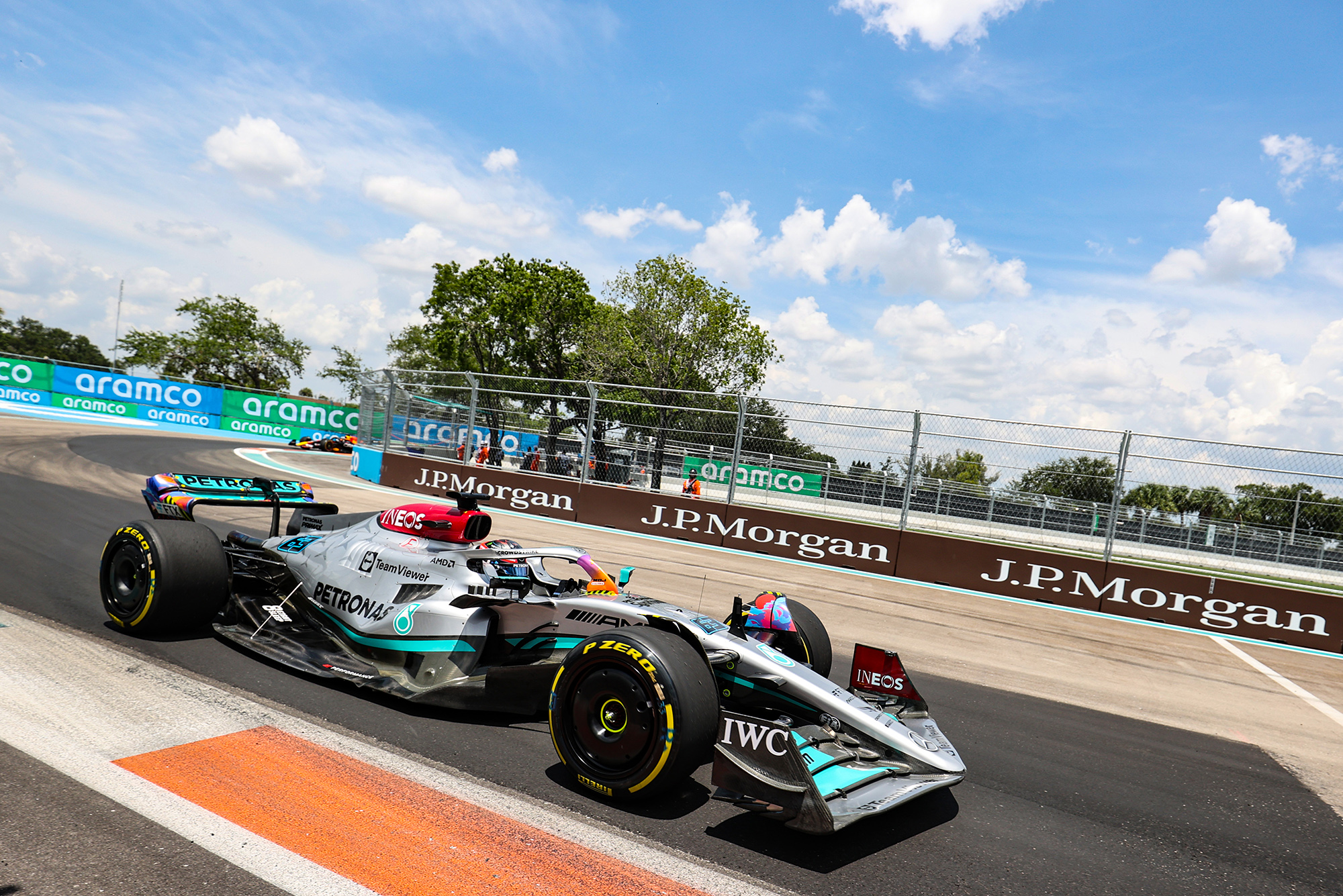 Perhaps in that is the big clue. The grip of the new circuit has been increasing quite dramatically through the weekend. Which seems to have taken the W13 into porpoising territory it was avoiding on Friday, while allowing others to simply take advantage of the greater grip.

“The rear of the car is hopping around,” continued Russell, “and you just don’t have any support or stability in the rear. Yesterday we were flying through sector one and I had so much confidence in the car… We don’t really understand why it feels different.”

The first hint that it was going to be a trickier car on Saturday than it had been on Friday came in the morning FP3 session where Hamilton and Russell recorded only 15th and 17th fastest times respectively.

“We made what we thought was a small change from yesterday going into FP3,” explained team boss Toto Wolff.

“We were just trying to optimise the downforce but the car went backwards. So for qualifying we undid that but still the bouncing was back, which hurt us in the braking zones and in what the tyres are doing.”

In hindsight it seems apparent that the change in behaviour of the car from Friday into FP3 on Saturday morning was less to do with the aero set-up changes than with the evolution in the track.

But introducing that new variable of set-up just further confused the issue as they headed into qualifying. 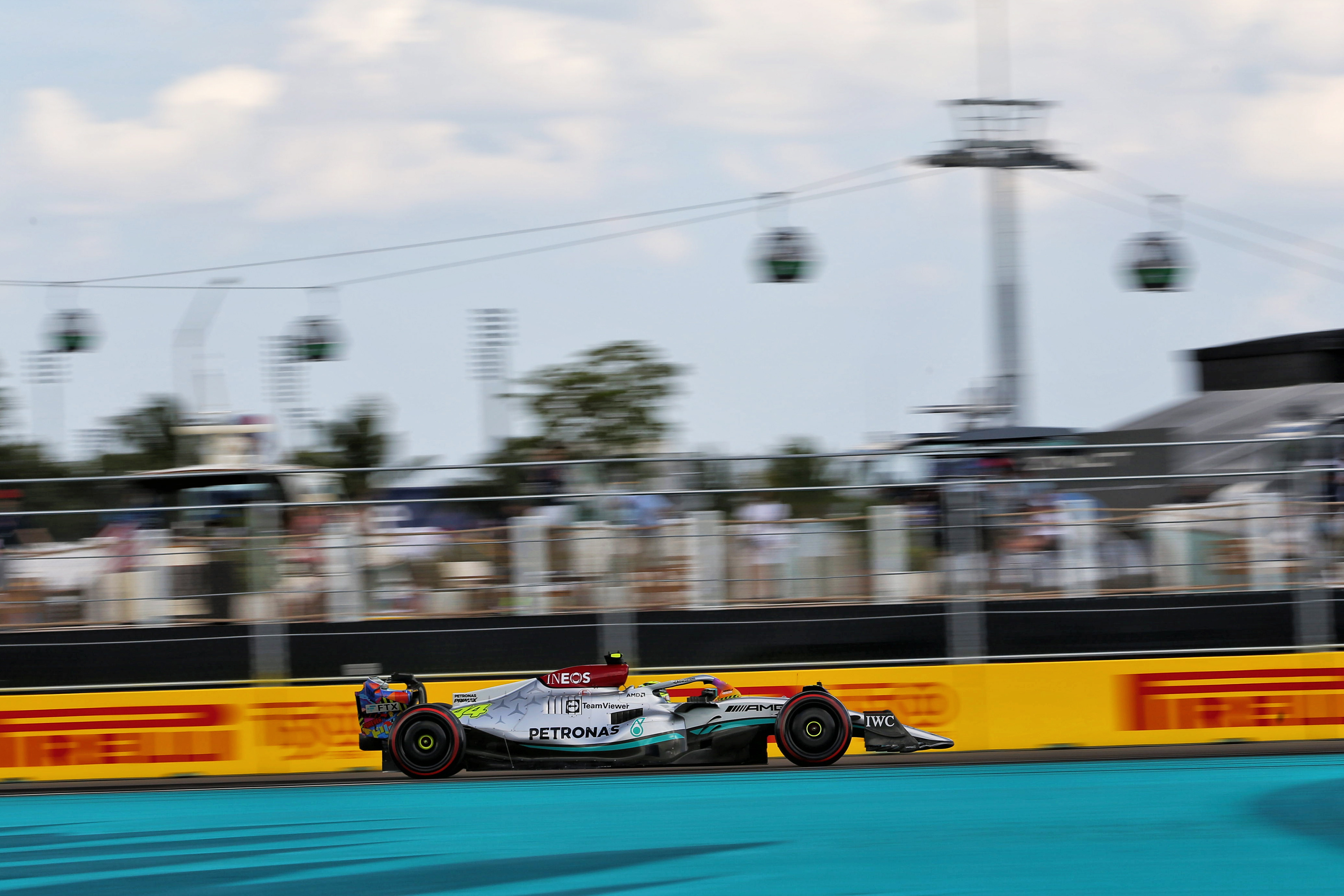 “We were confused yesterday why we looked faster than we usually are,” reiterated Hamilton on Saturday night. “It’s clear now that we haven’t really taken a step forward.”

Wolff presented it in a slightly more optimistic light.

“Yesterday gave us a glimpse of the performance of this car if we can get it in the right spot and we can manage the porpoising,” he said after qualifying.

But understanding how to do that seems as elusive as ever.

The ‘zero sidepod’ concept performed exceptionally well in simulation – to an extent that if it were replicated in the real world it would mean the car was now dominating grands prix. It’s as if the glimpse of that vast potential performance is just too exciting for the team to give up hope on.

“We believe in our concept,” says Wolff. “It has the potential for us to race at the front. 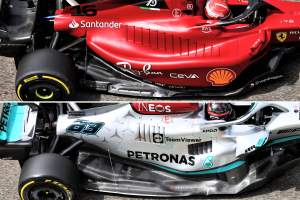 “But it is a very sensitive concept and it’s very difficult to get it into the window – because the floor is much more exposed than on other cars.”

The low-downforce demands of the Miami track – together with the aero upgrades which have given it a much more efficient drag/downforce trade-off at this level of wing – seemed on Friday to have combined with the low grip of the new surface to keep the car from its porpoising threshold. The grip generated was not triggering the problem which so limits the car.

But did that ray of Friday hope only delay the inevitable surrendering of a concept that only works in simulation?

“We haven’t yet capitulated,” says Wolff. “We are not ready yet to go back to simpler solutions.”

But even Toto accepts there is a limit to how long they can wait for the concept to come good.

“There will come a moment soon where we have to decide what to do for our 2023 car. But our understanding grows. This has been an experimental weekend and we are more knowledgeable each time.”