I get that Christian Horner’s angry. He’s got a big damage bill in a cost cap season when he’s desperately trying to win his team’s its first Formula 1 championship in eight years.

He’s also probably that sort of angry people get when they are relieved that something bad – like his driver getting injured – could have happened but didn’t quite.

But his recent comments regarding the Lewis Hamilton/Max Verstappen accident of last weekend may also have about them a propaganda element, a continuation of the public war of words to deflect pressure onto his rivals.

Because logically he cannot have it both ways. He can’t be proud of the way his driver gives no quarter wheel-to-wheel but simultaneously criticise the rival for the same attitude. 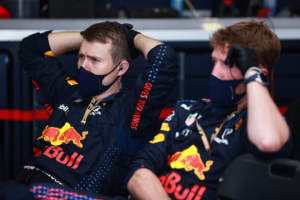 It was Horner who said of Turn 1 Barcelona this year, “Turn 1 was mega. I mean Max, that was full Max Verstappen – he was just going for it – and he positioned the car fantastically well.

“He tucked in, he got a little bit of a tow and a bit of momentum. And yeah he just braked later and ran the car wide. Thankfully Lewis had got out of it because otherwise he would have ended up in the fence.”

There was the 2018 Mexican Grand Prix when-team mate Daniel Ricciardo had irked Verstappen by celebrating stealing pole from him and Verstappen put it to rights in the opening seconds of the race, about which an admiring Christian said, “Max was either coming out that corner leading or not at all.”

Verstappen is a fabulous racer and his early-career excesses have now been curbed to the point where he is just super-hard but clean and fair. He takes no prisoners, as Horner has pointed out. But that can be challenged. No driver has a divine right to prevail in any 50/50 situation, so it’s an approach that has its risks.

When Christian says “Lewis has met his match” in Max – has he? It’s not a status you lay claim to and then are entitled to keep unchallenged.

That was sometimes a flaw in Ayrton Senna’s thinking. Verstappen himself has not claimed any entitlement, but Horner seems to be implying it.

Verstappen’s style of racing is totally legitimate and admirable. But if another driver wishes to be deliberately belligerent in response to an assumption of no-quarter given, that’s legitimate too. Not that Hamilton’s move last Sunday could even be termed that; it was a hard no-compromise move but “belligerent” is something like Nico Rosberg, Spa 2014, refusing to back off even after the corner was already lost.

In the Silverstone instance the corner hadn’t even been won or lost yet. Sometimes those two fully legitimate attitudes in wheel-to-wheel battle result in contact. It’s racing.

Sure, Max was just going to disappear in the lead if Lewis didn’t get in front by Copse, as Horner maintains. Sure, that was one important reason why Hamilton was so desperate to get in front. Again, that’s racing. The fastest driver doesn’t get right of way because they’re the fastest.

The idea of taking this incident any further because Hamilton didn’t enter that corner as fast again in the race or because he missed the apex is faintly ridiculous. He was trying for an aggressive pass, the other guy didn’t back down, they touched. Even the 10-second penalty was unjust, let alone any further sanction.