Mark Hughes: How Mercedes/Red Bull duel was distorted on Friday - The Race
Skip to content
Formula 1

A track temperature in excess of 63°C is extreme even by the standards of a Budapest summer. That’s how it was today and the varying effect that’s having on car balance and tyres has muddied the competitive waters somewhat.

The forecast for tomorrow and Sunday is occasional thunderstorms in the afternoon, but even if qualifying is dry the track is expected to be a lot cooler. So we had only the vaguest of previews today as Max Verstappen went fastest in the morning and Valtteri Bottas in the afternoon.

The morning session was held on a track of a mere 49°C, that of the afternoon registering at a peak of 64°! “I’ve never seen track temperatures above 60°C in my whole career!” exclaimed Alpine’s Esteban Ocon “It’s very challenging to deal with the warm temperatures and having to manage the tyres, brakes and the car is a big exercise. Understanding all of that is key.”

“It’s just melting the tyres as soon as you leave the pitlane,” said Lewis Hamilton after setting second-quickest time of FP2, a few hundredths behind Bottas and around 0.3s faster than Verstappen. “Which makes it quite hard to get a balance.” 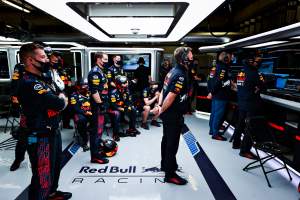 Therein is summarised the challenge of such extreme temperatures. Because the rears get straight up to temperature but quickly degrade, while the fronts don’t even begin coming up to temperature until the end of the lap! Which meant – for pretty much everyone, but to varying degrees – understeer for most of the lap on a qualifying simulation, with the rears falling away in the last couple of corners. Setting the car up to limit the initial understeer gave the best single-lap pace, but made the car an oversteering handful once into long runs, especially when the switch was made to the harder medium tyre.

How narrow that window of compromise was between the two states of difficulty defined how close to your car’s theoretical limits you could get. It would be fair to say that Red Bull was struggling a lot more than Mercedes. Verstappen’s comments early in FP2 as he made single lap simulations told of the difficulty on the softs: “It’s so understeery it’s unbelievable.” With the same set up, the addition of some fuel and a switch to the mediums, he was saying that he has” so much turn-in oversteer it’s almost undriveable”.

The Merc’s window seemed a little more forgiving. “Yes, considering it doesn’t really feel great out there in terms of the grip is poor and there’s a lot of sliding around… to be 1-2 suggests everyone is in the same boat,” said Hamilton. “In the same boat” or worse, actually.

But it’s all probably not very relevant. If the track is significantly cooler, as expected, everything becomes much easier. Only when both Mercedes and Red Bull drop into a more natural balance as the tyres are no longer so difficult will we see a true comparison between them. It may look as it did in FP2, but it probably won’t.

“If the temperatures stay like this I’d be optimistic,” said Hamilton. “We can even improve it, balance-wise, which would put us in an even better position.” But if it cools. “Obviously it’s much nicer to drive when it’s cooler…” But it will be for Red Bull too. “Everyone’s struggling with the front tyres,” continued Hamilton. “They’re a different beast this year and it’s different each race you go to. So, that’s been an interesting process trying to understand those better.”

Neither Verstappen nor Sergio Perez seemed unduly concerned about the Friday deficit to Mercedes. “It’s nothing too big to overcome,” stressed Verstappen. “It’s just we need to look at what works and what doesn’t [in the set up]. I’d say we’re ok, even if the temperatures stayed like this.”

“We’ve made good steps,” said Perez, “and we have a good idea about what we need to do before qualifying to make improvements, so I am optimistic for the rest of the weekend.”

GPS analysis of the Mercedes and Red Bull showed that the latter was losing almost 0.5s to the Mercedes on the straights and making up only around 0.25s of that through the slow- and medium-speed corners. But this was with a mismatch in how bad the balance was between the two cars – and with a Honda power unit setting which appeared to be more conservative than that of Mercedes.

Red Bull’s difficulty with the balance meant it did no long runs worthy of the name. Verstappen was in and out for wing changes in between getting caught in the heavy traffic around this relatively short track. Hamilton did only three consecutive laps in between a spin and pitting for a balance change. Perez did two. As such, we haven’t published any long run times. The scatter between them makes them comparison meaningless. For what it’s worth Bottas’ nine-lap run average on mediums was around 1m 23.5s compared to Ocon as best of the best of the midfield at 1m 24.2s on the soft.

It was notable that only Mercedes and Red Bull made their long run attempts on the medium tyre, with the next group – which on single-lap pace was in the order Alpine, AlphaTauri, Aston Martin, McLaren and Ferrari – all planning around a starting stint on the soft.

The C4 soft has as much as 1s per lap over the C3 medium and as such only the top two teams can safely consider running Q2 with the medium, thereby likely amplifying their advantage over the rest.

The order of that next group is unclear. Ferrari headed it in the morning but lost a lot of single lap pace – or rather did not find as much as the cars around them – as the track temperatures came up. Alpine was the strongest of this group in both single lap and long runs in the afternoon, but a cooler track combined with McLaren’s habitual jump in qualifying (when its DRS mode brings it more time than the others) will likely see that order jumbled all over again. Pierre Gasly will be hoping among that reset he can retain his AlphaTauri’s strong form; he was the Ferrari’s closet competitor in the morning and Alpine’s in the afternoon.