The early signs on Friday at a hot and windy Baku are remarkably good for Red Bull.

Any small provisos are dwarfed by the positive news, which was that the team was quickest over single laps in both FP1 and FP2 as well as in the long runs of the afternoon.

It did this with the medium-downforce spoon wing package rather than the low downforce version, the sign of a team confident in its underlying pace.

Max Verstappen headed the morning times, Sergio Perez those of the afternoon. The pair were extremely closely matched on the (necessarily short) long runs, but comfortably clear of the best of the rest.

Perez had what team boss Christian Horner described as his best day since joining the team, looking sharp and on the pace.

Of the top four teams, Red Bull looked to be the only one with a combination of good downforce and tyre usage.

Mercedes and Ferrari were struggling with diametrically-opposed tyre problems. The list of fastest times considerably flatters Ferrari and exaggerates Mercedes’ problems – but those problems are very real, as of Friday. 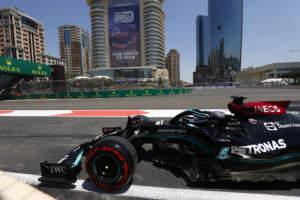 Mercedes has a whole heap of work to do and was in trouble with what appeared to be a Monaco-like difficulty in getting the tyres up to temperature, manifest as a general lack of grip over a single lap but much more respectable long run pace.

“It wasn’t just a little bit,” answered Valtteri Bottas to how much he was struggling with getting the tyres up to temperature.

“We are just struggling for overall grip. The balance of the car was not far off – OK it felt a bit unpredictable sometimes – but it feels like it just lost grip, especially in the second session, and we were just sliding around everywhere.

“It’s going to be a long evening. I think there is something fundamentally wrong we need to find.”

Lewis Hamilton, 11th fastest, five places ahead of Bottas, backed up his team-mate’s feelings about the car: “I got all the clean laps I needed but we were just too slow.

“I feel like I’m driving well but there’s just no more time in it. We’re just scratching our heads trying to improve… the car was limited, and just had no more grip in places I wanted to go quicker.

“We’ll work on it. I don’t really know why we are where we are.”

Team boss Toto Wolff says he is expecting one of the most difficult qualifying sessions he has had with Mercedes.

In the very short ‘long’ runs, things looked a little brighter. Hamilton was fastest of those on the mediums, but that didn’t include Red Bull or McLaren.

Unlike the Ferrari drivers he was able to keep these tyres in shape for the full duration of his run.

But unless Mercedes discovers something ‘fundamentally wrong’ overnight, the chances are that it will not be able to start the race on the medium tyre and may have to take the soft just to get into Q3.

Ferrari’s problems are transposed from those of Mercedes, quick-ish over a lap, hopeless over a sequence of them.

Relying on its car’s excellent low-speed behaviour through the slow middle sector of the old town, Ferrari surrendered a lot of downforce with its wing choice in trying to compensate for its naturally high drag and was consequently quick down the long Caspian ‘straight’ and Red Bull’s closest rival over a single lap.

But the downside of surrendering that wing area was truly awful rear tyre deg evident after just three laps.

It may well be that Ferrari needs to add wing into Saturday, just to have a feasible race strategy and this would likely come at the expense of qualifying competitiveness. That and its usual higher power choice for Friday than the others is flattering it in the lap time lists. This is no repeat of Monaco, where its pace was already very genuine at this stage of the weekend.

McLaren is something of a dark horse, under-represented in the lap time lists. In the morning this was because Lando Norris spun away what was shaping up to be a Red Bull-rivalling time. In the afternoon he did his single fast lap early in the session, straight after the Nicholas Latifi red flag, in order to devote more time to the long runs.

Others benefited from the ramp-up in track grip when they did their times. Norris’s soft-shod long run was respectable rather than stunning, averaging around 0.8s off the Red Bulls. Daniel Ricciardo still seems a little adrift of his team-mate.

Other stand-outs were the decent pace of the Alfa Romeo, helped along by a very aero-efficient package down that long straight. Antonio Giovinazzi was quickest of all in sector 3 and seventh overall.

Pierre Gasly’s fifth position for AlphaTauri is probably flattered by Mercedes’ problems and his long run attempt deteriorated quite quickly.

Alpine’s Fernando Alonso looked very much in the groove throughout and furthermore the team’s soft-shod long run performance looked very respectable, averaging only a few tenths adrift of Norris’s McLaren.