Charles Leclerc hopes that Formula 1 will make track limits restrictions clearer in its Virtual Grand Prix series because the strictness is inconsistent and making it “ugly to watch”.

Leclerc lost out on victory in the virtual Spanish GP after picking up a three-second penalty on the penultimate lap when he cut the inside of the final chicane too much.

He finished 2.5s behind winner George Russell, and would have inherited the win as Russell had his own track limits penalty.

Leclerc first aired his annoyance mid-race when he discovered how much he could get away with cutting the final part of the chicane, and it was clear when he was following Russell that the Williams driver was doing similar.

Though he admitted he went too far on the penultimate lap, earning himself a penalty, Leclerc cut a frustrated figure over the track limits rules, which he said were meant to be strict but were still lenient at that part of the circuit.

On the final lap, after conceding the race to Russell, he said: “The only thing that’s making me a tiny bit angry, is track limits.

“It makes no sense. We need to make it clear. Because this makes it ugly to watch.

“But George was quicker anyway, so he deserves the win.”

😮@GeorgeRussell63 overtakes for the lead… with a three-second time penalty, can he get ahead and take the #VirtualGP win??

Discussing track limits with his fellow drivers afterwards, Leclerc admitted he was “completely stupid” on the penultimate lap but argued that the restrictions were “completely different in the race”.

Russell replied: “In the race I could do it all the time without track limits. The only reason I did this I thought if I get another penalty I don’t care because I won’t win – but if you continue to follow me, I hope you get a penalty!”

Leclerc told the post-race broadcast he was “very disappointed” to receive the penalty.

“The only thing is the track limits on the last corner was a bit easier than other parts of the track,” said Leclerc.

“I was trying to cut a little bit more every lap. Everyone has done that. George probably had the penalty the same way I did.

“We’re trying to go a bit more in the inside all the time, at one point I just went too much and I already had a warning, so a three-second penalty.

“It’s such a shame, the second to last lap.” 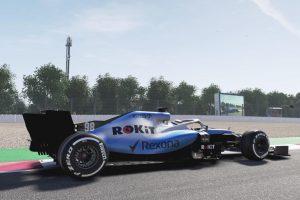 Leclerc had suffered an earlier frustration mid-race in which he lost a buffer of nearly two seconds while leading.

He complained of lag when he saw his lead was reduced to less than a second, putting Russell in DRS range and setting in motion the events that would cause Leclerc to lose the race.

Russell acknowledged that Leclerc had “some issues” which “helped me out”, and admitted he feared he had cost himself victory with his own penalty before being delighted to learn of Leclerc’s sanction.

“I’m not used to this winning thing – I’ve not done it for a long, long time,” said Russell. “I’ve dearly missed it.

“When I got past Charles and knew I had that three-second penalty I was pretty furious.

“When that radio message came at the end and I heard he had a penalty, I was almost wetting my pants.”