Leclerc fears for his pole: 'I don't know where I'm starting' - The Race
Skip to content
Formula 1

Leclerc fears for his pole: ‘I don’t know where I’m starting’

Ferrari Formula 1 driver Charles Leclerc has admitted he isn’t sure he will get to keep his Monaco Grand Prix pole, having hit the wall in the final stages of qualifying.

Leclerc took provisional pole by two tenths after the opening attempts in Q3 and then tagged the wall coming into the second chicane of the Swimming Pool section, breaking his suspension as a result.

He subsequently hopped the kerb and thwacked the outside barrier, doing yet more damage to the car but also forcing the session to be red-flagged – which meant qualifying would not resume and his initial lap would remain quickest. 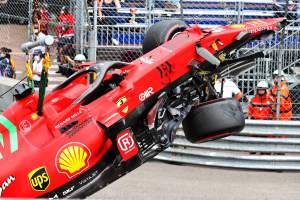 However, he now runs the risk of post-session penalties, depending on the exact amount of damage that was done to his Ferrari SF21.

“I have mixed feelings a little bit because with the crash I don’t know where I’m starting tomorrow yet,” Leclerc said in the post-qualifying press conference.

“It depends on the damage on the car. I really hope that the car is not damaged enough that we will be starting from the back, but if it’s not the case then of course I’m incredibly happy with whatever happened before the crash.

“I’ve seen that it wasn’t a great lap I was on in the last one and I tried to do a bit more for the last sector, but obviously there was too much time to recover, and I just did too much and I just touched the wall in the inside and went straight into the wall.

“It’s a shame how we ended up, obviously it was very difficult for me to manage the whole session, I was very emotional after Q2 obviously, because I’ve seen that there was actually an opportunity to do pole position here, and then calmed myself down, did a great lap in Q3 run one. Then what happened happened.”

If Leclerc’s Ferrari requires a new chassis, it would entail a pitlane start and make his home race effectively a write-off.

But it’s gearbox damage in particular that seems a worry that’s likelier to come to fruition right now.

A new gearbox would result in a five-place penalty and would put Leclerc sixth on the grid, giving pole to Max Verstappen.

“It’s true, we are worried but we are checking it,” said team principal Mattia Binotto of Leclerc’s gearbox. “It’s too early to know.

“So let’s leave the mechanics and engineers to check the gearbox itself and let’s see in the next hours.”

Nicholas Latifi got away from a similar-looking crash at the same place in FP3 without Williams having to replace his gearbox, but the damage to his car looked marginally less dramatic.

Leclerc said he had brushed the wall on his pole lap at the same place, which encouraged him to take a risk again the second time around.

“But after that, I put all of my best corners into that lap so it felt very good and again at home feels even better.

“But it’s not the same feeling as normal, as my head is somewhere else at the moment.”